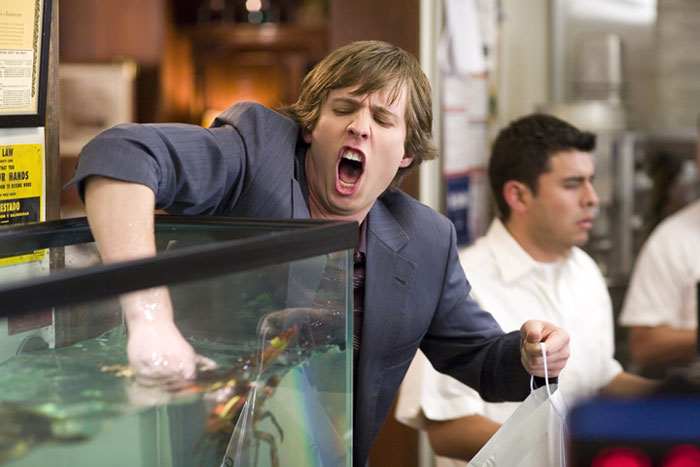 Roger (Jon Heder), a meter maid-man in New York City, is plagued by frequent anxiety attacks (including passing out) and the lowest of low self-esteem. Distraught with his life, especially his inability to articulate his crush on his pretty Australian neighbor, Amanda (Jacinda Barrett), he calls a secret phone number that will help him become a lion instead of a lamb. Little does he know that his about to enroll in a “School for Scoundrels.”

Dr. P (Billy Bob Thornton) heads the hush-hush, make-you-a-lion extreme self esteem class – tuition: $5000 cash in out of sequence bills in a manila envelop – and, along with his assistant and strong arm, Lesher (Michael Clarke Duncan), he tears down what little regard they have for themselves. The class consists of a disparate group of losers, including Walsh (Matt Walsh), still living at home; Diego (Horatio Sanz), the penultimate henpecked hubby; and Eli (Todd Louisa), the equally penultimate lonely guy. The not-so-good doctor uses intimidation, violence and threat to school his students to become the head of the pride. But, when Roger moves to the head of the class, Dr. P decides to give him some special competition over Amanda. School for Scoundrels” is more a “nice” movie than a vice” movie with its aw-shucks performance by Jon Heder who gives an urbane update on his “Napolean Dynamite” geek. Billy Bob Thornton starts off as a tough taskmaster in the beginning and maintains this tone as the challenge between Dr. P and Roger escalates. But, his perf softens somewhat as things draw to a close and Billy Bob evokes your sympathy despite his nefarious ways. Michael Clarke Duncan, as the doctor’s henchman, is a hard ass throughout and you hope he gets his comeuppance. (Hint: stay for the credits for the film’s wrap up.) Jacinda Barrett is an attractive object of attention as Roger gets past his shyness and Dr. P gives him some advanced “training.” The rest of the geek squad, Roger’s classmates, are two dimensional except for the trio mentioned above. Director Todd Phillips does well enough with his latest comedy but it lacks the sheer outrageousness of his previous laugher, “Old School.” “School for Scoundrel” is lighter fare with far fewer gross outs than one would expect but there are some laughs sprinkled throughout the film. The script, by Phillips and Scot Armstrong, is a routine tale of one man finding his inner lion that doesn’t have many surprises though it is mildly entertaining. Don’t expect a sparkling laugh fest but most attracted to it will have some mild fun.