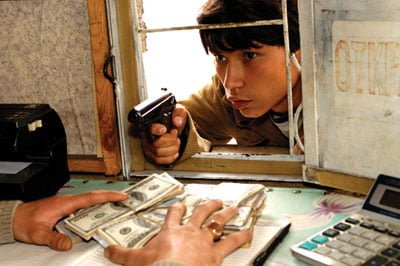 Quiet, taciturn Mustafa (Olzhas Nusuppaev), called Schizo by most because of his eccentric behavior, is not quite 15-years old. The boy has not had an easy time of it and has developed a thick hide and a tough as nails attitude on life. Things change, though, when a boxer he recruited is killed during an illegal fight match. Mustafa agrees to take the dead man’s meager winnings and bring them to his girlfriend and child and a new life begins for “Schizo.”

The Kazakhstan film industry isn’t known much beyond the borders of that remote country. But, first time feature director Guka Omarova transcends those borders with her deft story telling about a boy who is forced, by life circumstances, to become a man. Schizo lives with his single mother and her low-life, small-time hood boyfriend, Sakura (Eduard Tabyschev), who is always looking to make an easy ruble. He hires Mustafa to seek out fighters for brutal underworld boxing matches and the boy takes on his new job with gusto. Not yet 15, Schizo is making spending money and, despite the brutality of the ring, likes his newfound career as a recruiter. That is, until one of his fighters, Ali, is dealt a mortal blow during a fight. His last request is for Schizo to take the little cash he has and deliver it to his girlfriend, 28-year old Zina (Olga Landina), and her little boy, Sunzhik (Kanagat Nurtay). Schizo is overwhelmed by the Zina’s poverty (and her noticeable limp) and quickly grows fond of little Sunzhik, who sees the teenager as the older brother/uncle he never had. As Schizo spends more and more time around Zina’s hovel, the three lonely people form an odd little nuclear family. Mustafa becomes obsessed with caring for the loving family he never had and gets involved in shady, violent deals that will endanger his new life. Newcomer filmmaker Omarova musters a competent cast, mostly non-actors, and tells a very different coming of age story (written by the director and her muse, Sergey Bordov). In the title role, Olzhas Nusuppaev, one of the non-professionals, gives a reticent performance marked by monosyllabic replies and a bashful, unassuming smile. The boy fast becomes a man as he takes on adult responsibilities and emotions. The director underplays Schizo’s quiet nature and garners a soft-spoken, rich performance from the young man. Olga Landina, as Zina, affects the character’s limp throughout the film but there is a grace of movement by the actress that belies her supposed handicap. The rest of the supporting cast fill out the background effectively. Cinematographer Khasanbek Kydyraliyev, shooting in lush 35mm film, captures the stark, rugged Kazahki landscape with a crisp clarity. The film shows its small budget but the helmer elicits solid behind the camera work from her crew. Schizo” is definitely not the kind of film that you will see at the local multiplex. The denizens of those establishments wouldn’t go see it, anyway, spending their money, instead, on the latest “<plug in the name> 2.” But, if you are film lover and like to walk on the cinematic wild side, seeking something intelligent and away from the mainstream, then Schizo” is worth a look.