Scenes from a Parish 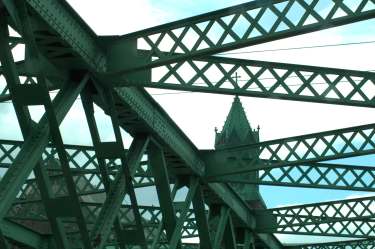 The old mill city of Lawrence MA has gone through drastic demographic changes over the last decades. What was once an all-white community has attracted a major influx of Hispanic-speaking people for years and documentary filmmaker James Rutenbeck brings his camera to a microcosm of the city, St. Patrick’s Church and School where he shows us “Scenes from a Parish.”

The old mill town of Lawrence, Massachusetts, is the poorest city in the state. In 2001, Father Paul O'Brien, a Harvard classmate of Conan O'Brien's, came to Saint Patrick's parish and found a community divided among generational, cultural and class lines. Documentarian James Rutenbeck spent four years with many of the diverse parishioners and the city itself to illustrate the effect that a common religion has on community today in "Scenes from a Parish." The Church-going faithful have been decreasing in numbers and what is miraculous about Rutenbeck's work is how it shows a closed blue collar Irish Catholic parish becoming rejuvenated by the Latino immigrants, many homeless, that many of its old timers initially rejected. Most documentaries focusing on the Catholic Church of late have been intent on exposing abusive priests, so it is a wonder to see a work that gives one faith in priests again. Driving around and flying over south Lawrence, Rutenbeck's camera gives one a solid sense of the type of blue collar neighborhood St. Patrick's anchors as we hear Father O'Brien discuss the difficulties of trying to unify the old with the new. Senior parishioner Edna McGregor believes a Mass spoken in both English and Spanish will hold nothing for her and thinks all these newcomers just don't want people to know they really can speak English. The flip side of Edna is Peggy Oliveto, a California native trying to help the newcomers by organizing foodbanks and housing. Helping Peggy is Frank Martin, an older man beginning to feel his compassion wane in the face of so many Latino families deserted by the children's father. Are these people's values so different from ours that their men can just walk away, he wonders? Then there is Rosaura Vasquez, a young woman who leaves college to return to care for her parents, now burdened with her father's fight with bone marrow cancer. Here we see family is important above all. Other younger members of the immigrant community are trying to overcome pasts that old time Lawrence folk cannot come to grips with. And yet it is not just these people who speak another language who are controversial. Bobby McCord is clearly old school St. Pat's, and yet his disability, his 'otherness,' also puts him on the line for criticism, albeit criticism tempered with more willingness to accept. Although Rutenbeck spent years making his documentary, he follows a seasonal outline which can first be seen with preparation for Christmas midnight mass. Music director Pat Romeo coaches Vasquez for a solo. Vasquez admires the senior women's choir. Music is an equalizer (and the film itself is beautifully scored). A staging of The Passion Play on the streets of Lawrence is an incredible document of community involvement. The film is obviously shot on video, and yet the images have been beautifully composed, from the magic of a Church interior aglow with candlelight to the quiet hush of an early snow or a long shot of kids walking along train tracks. (These pretty images found within a gritty neighborhood illustrate what McCord's sister has to say about her favorite book, one about a girl wanting to show that her tough neighborhood is better than it seems.) Sound recording is crisp. This is a top notch production. As the documentary draws to a close, we can see Father O'Brien's efforts beginning to pay off. Money has been raised for a community center (Conan O'Brien makes an appearance, just as I remember NHL legend Bobby Orr lending a hand to my old Catholic school, a favor to a friend who happened to be a priest). There are surprises, too, not only of the personal kind with the people we've grown to know (Rutenbeck obviously engages trust from his subjects) but of sea change - now we begin to hear that the Irish weren't always accepted either, a telling bit of shared experience, a realization that maybe the newer folk aren't that different after all. "Scenes from a Parish" may not be getting the type of theatrical release some documentaries can command, but that does not make it any the lesser. In fact, in its complete immersion into one community, it has something to say about people everywhere.

This heartfelt little documentary is timed to fit the hopeful attitude we once again have in a world that has dealt so many of us a lousy hand. The country faces a faltered economy, a soaring defense budget, high unemployment and a failed banking and investment industry. Cities like Lawrence are the worst hit by the economic downturn, more so because of the ongoing influx of Hispanics and the steady emigration of the former white majority. Rutenbeck wisely uses St. Patrick parish and its charismatic priest, Fr. Paul O’Brien, to show the grassroots efforts of the church’s better off parishioners to help the community to feed and care for its needy. Couple this with some remarkably vivid video footage of the holidays and the result is a tightly produced work with notable use of digital video in capturing the small spectacle of St. Pat’s Christmas celebration. The helmer balances things, too, showing some of the parishioners’ negative attitude to the Hispanic immigration into their city In these hard economic times it is heartening to see a documentary work that makes you feel good about average people who give above average of themselves.