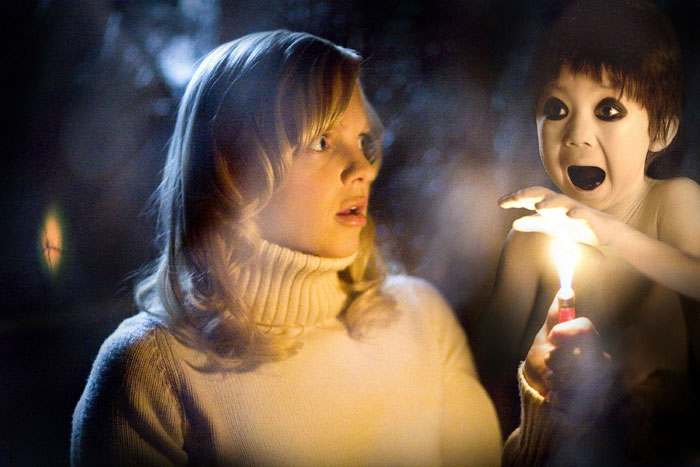 What do "The War of the Worlds," "The Grudge," "Saw," "The Village" and "Million Dollar Baby" have in common? Screenwriters Craig Mazin ("Scary Movie 3") and Jim Abrahams ("The Naked Gun," "Hot Shots") cross all their plotlines as Cindy Campbell (Anna Faris, "Scary Movie 3," "Brokeback Mountain") tries to figure out who murdered the little boy who is haunting her house as she is yanked apart from the man of her dreams when the earth is invaded by Tri-Pods in "Scary Movie 4."

"Scary Movie 4" begins with Dr. Phil and Shaquille O'Neal chained in Jigsaw's filthy bathroom and ends with a joke that's been pretty much played out in the movie's trailer. The surprising thing is that the "Saw" parody is no non sequitur, getting worked back into the plotline in a mildly inventive way. That about sums up the film, a hodgepodge of tired jokes that is occasionally goosed by a good idea, an inspired cameo (Charlie Sheen as Bill Pullman's "Grudge" character, Bill Pullman as William Hurt's "Village" man, Michael Madsen filling in for Tim Robbins's "Worlds" nutjob), or the comic chops of its main cast, particularly Faris. Cindy enters "The Grudge" house (where Cloris Leachman does another comic spin on senior catatonia) right next door to the home of Tom Ryan (Craig Bierko, "Cinderella Man"), a blue collar divorced dad trying to reconnect with his two kids. Their first kiss is buzzed by a blast of lightening shot from the skies by alien invaders. Tom and his kids retrace Cruise's route while Cindy joins up with Brenda Meeks (Regina Hall, "Scary Movie 3," "The Honeymooners") and detours into "The Village" before they all find themselves in the belly of the beast for some startling familial revelations. Faris is a gem for this material with her wide-eyed incomprehension and sweet earnestness. She's got a great early montage where she silently pantomimes all the horrifically gross things involved in Mrs. Norris' (Leachman) care while Ryan babbles on in a lovestruck haze. Bierko is OK as the Tom Cruise stand-in, but he's a little too broad, not as experienced as Faris at finessing crude humor. Hall's good too as the lusty, gutter-minded Brenda, and Zucker vet Nielsen ("Naked Gun") brings George W. Bush humor to a new high low. And while it is easy to poke fun at the President, even using events of 9/11, "Scary Movie 4" goes too far parodying a "WotW" scene that alluded to the ash which coated those at Ground Zero for yucks. The "Brokeback Mountain" bit which has a cheesy segue and seems so overdone in the film's ads actually plays funnier (and uncut) on the screen, but the "Million Dollar Baby" bit that forms Cindy's core motivational flashback is just lame, as is the slapstick and bathroom humor handed to a game(y?) Carmen Electra as "The Village's" blind heroine. "Scary Movie 4" is at its best when it takes cliches and twists them into something unexpected. Just when you think director David Zucker ("My Boss's Daughter," "Scary Movie 3") and company have blown an opportunity to roast Spielberg's sappy "Wars" ending, they get you with a funny bit involving the narrator (Morgan Freeman replaced here by the maestro, James Earl Jones). And though they detour too frequently from their chosen genre, the film's final bit, where Debra Wilson ("Nine Lives") makes a fine Oprah to Bierko's Cruise couch-jumping antics, is funny precisely because of how closely it seems to hew to the real thing.