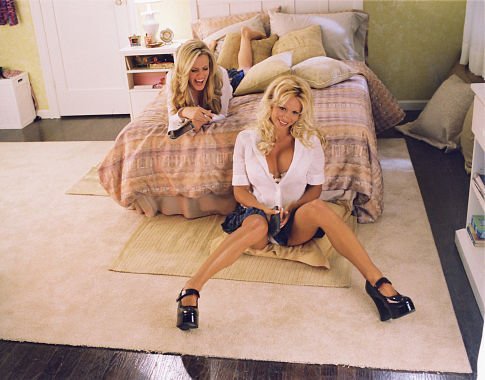 What do you expect of a trequel to a movie that made fun of a movie that was a parody in and of itself? Well, if it’s a movie that the originating Wayans brothers are NOT involved in and one that “Airplane” auteur David Zucker is, then that movie is “Scary Movie 3.”

Writers Brian Lynch, Craig Mazin, Pat Proft and Kevin Smith, with a polish by director David Zucker ("Airplane!" and the "Naked Gun" series), spoof scary movies "The Ring" and "Signs," broaden their parody with box office success "8 Mile," then add liberal doses of "The Others," "The Matrix Reloaded" and "Bruce Almighty" to rejuvenate a series with "Scary Movie 3." After the Wayan Brothers' dismal sophomore outing in "Scary Movie 2," Zucker style looniness seems like a shot in the arm for this ailing series, but the adrenaline only lasts so long before the anemia of an over-milked franchise sets in. Still, "Scary Movie 3" offers enough real laughs in its first half to make it worth a sit and ends with a last second reference that I, for one, didn't see coming. Like Drew Barrymore and Carmen Elektra in the original "Scream" and "Scary Movie," a sexy icon appears in only the first scene, although "3" gives us a well-endowed pair. Jenny McCarthy ("Scream 3") and Pamela Anderson ("Barb Wire"), dressed in tiny parochial school uniforms, reenact the opening of "The Ring" in a truly hilarious bit. McCarthy continues her tradition of guy-style gross-out humor by scratching behind her ear with her foot while Anderson is a good sport taking an in-joke ribbing regarding her taped sexual exploits with ex Tommy Lee (later Charlie Sheen's well publicized sex life is also the butt of a joke delivered by none other than his wife Denise Richards). "Scary Movie" alumnus Anna Farris ("Lost in Translation") returns as the star this time around as reporter Cindy, investigating the rumor of a deadly video while trying to raise her orphaned nephew Cody. Meanwhile strange crop circles are appearing at a farmhouse owned by former clergyman Tom (Charlie Sheen), a widower who lives with his inept brother George (Simon Rex, "The Forsaken") and daughter Sue (Jianna Ballard), who goes to school with Cody. These two events become connected when an Oracle, Aunt Shaneequa (Queen Latifah, "Bringing Down the House"), tells Cindy that a lighthouse is the key to the tape and the aliens. Of course the storyline is inconsequential, but several scene recreations are handled with deft, if sometimes groan-inducing, humor. Sheen and Rex are terrific with the physical comedy, whirling about like stationary dervishes in front of, rather than circling, their home responding to screams from the cornfield. Visual gags after such comments as 'The dogs are acting strange' may be obvious, but they are funny. When George announces that he's going to become a rapper, a bus with a route to 'Da Hood' appears. The rap contest which follows is hit and miss, but includes some inspired touches with a pitch pipe and a Simon Cowell cameo. The film's best supporting players (along with McCarthy and Anderson) are introduced here in emcee Mahalik (Anthony Anderson, "Malibu's Most Wanted") and George's diminutive fan CJ (Kevin Hart), who have two hilarious verbal bits that play like a hip hop vaudeville routine. In bad taste, yet amusing nonetheless, is former Father Tom's arrival at his wife's accident scene where he and Trooper Champlin (Camryn Manheim, "The Tic Code") communicate using fast foods and Shymalan's "Signs" character is spoofed by reckless driver Sayaman (Ajay Naidu, "The Guru"). The film takes a downturn when, of all people, Leslie Nielsen enters the picture as President Harris. Slapstick had been well utilized up to this point, but it becomes incessant with quickly diminishing returns. Tabitha, "The Ring's" well girl (stuntwoman Marny Eng), makes one too many appearance using martial arts skills, although she does appear in Tom's cellar brandishing a chainsaw. The videotape itself is unevenly parodied, but some toss off bits involving a babysitting Catholic priest (Darrell Hammond, "Agent Cody Banks"), Eddie Griffin ("Undercover Brother") as a henpecked Orpheus and George Carlin as a dictionary wielding Architect are fun. Regina Hall ("Malibu's Most Wanted") throws herself into a crying wolf gag as Cindy's friend, Cody and Sue's teacher Brenda. "Scary Movie 3" removes the bad taste of the second, but doesn't whet the appetite for a fourth serving.

Keeping to the formula developed in the original and funny “Scary Movie,” Zucker and company mix in a dose of their own manic movie shenanigans and come up with a fairly fast paced romp that loses steam after an hour but is, still and mercifully, only around 80 minutes long. This is, I guess, a good thing since the filmmakers are hard pressed to put anything original or fresh into this now worn out franchise. This time around the movies being parodied are “Signs,” “The Ring,” “8 Mile,” “The Others” and more as wannabe-a-hardnosed-reporter Cindy Campbell (Anna Faris hunts down the source of a mysterious video tape that, when watched, portends death to the viewer in seven days. Meanwhile, a fallen preacher, Tom (Charlie Sheen), is presented with a strange phenomenon in his cornfield – a huge alien crop circle that spells out “Attack Here” with an arrow pointing at the former priest’s home. At first, the laughs come out loud for the signature opening with two babes (Jenny McCarthy and Pamela Anderson), dressed as parochial school girls, left alone in an otherwise empty house. One screams in mortal terror that they are “in a big house with only one phone!” Things continue in this slapstick manner for the run of the film with each of the targeted movies parodied and made fun of in sometimes laugh aloud moments but mostly with grins as the reaction to the antics. There is a big ensemble cast associated with “SM3,” including Leslie Nielson as the goofy American president who is a cross between Llloyd Bridges in the “Hot Shots” movies and the actors own Frank Drebin from the “Naked Gun” series. “Scary Movie 3” is certainly a heck of a lot funnier than its predecessor, the dreadfully unfunny “SM2,” but, because it does not have the advantage of being fresh, new and original, it falls short of the first. Still, I enjoyed the laughs when they happened and