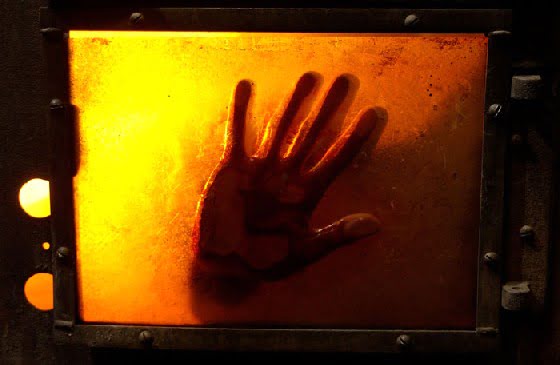 When another Jigsaw victim is identified, Jigsaw expert Kerry (Dina Meyer, "Star Trek: Nemesis," "Saw") points out something additionally disturbing about the crime scene - a personal message to Detective Eric Mason (Donnie Wahlberg, "The Sixth Sense," "Dreamcatcher") that advises him to 'look closer.' Mason discovers a clue to Jigsaw's whereabouts, but John Kramer (Tobin Bell, "The Quick and the Dead," "Saw") is leading him into a trap in "Saw II."

The first "Saw" got points for its outrageous premise even as it lifted ideas from better movies. "Saw II" continues to lift ideas, from films like "Speed" to "The Silence of the Lambs" (again), but the premise of the second is hackneyed, its acting weak, its score thudding and its direction and production values low rent. After the admittedly squirm-inducing prologue, there's no reason to stick around for "Saw II." Mathews has been having trouble with his teenaged son, Daniel (Erik Knudsen, "The Prize Winner of Defiance, Ohio"), who has added to his stress by stealing. ('Your mom's got custody, I take you into custody.') Once he's face to face with cancer victim John Kramer, though, he discovers his stress is about to go through the stratosphere - in the next room Jigsaw has a bank of monitors set up which show that Mathews' son Daniel is one of eight new Jigsaw game players. They have two hours to solve his riddles or their organs will begin to break down from the nerve gas they are breathing. But Jigsaw tells Mathews he'll have his son back safely if he just gives him time for conversation. The clock is ticking. Debuting director Darren Lynn Bousman's script was massaged into a vehicle for the Jigsaw by "Saw" cowriter Leigh Whannell, but essentially its just a video game peopled with types ripe for slaughter. Besides the troubled Daniel, Jigsaw's got Xavier (Franky G, "The Italian Job"), a threatening type who just wants to punch his way out of the place no matter who he has to punch through to do it, and his counterpart Jonas (Glenn Plummer, "Showgirls," "The Day After Tomorrow"), the thoughtful type who wants to sift through the clues and formulate a plan. Gus (Tony Nappo, "Four Brothers") is just fodder for the first booby trap shock and Obi's (Tim Burd, "Resident Evil: Apocalypse") this outing's hated collaborator. The women are comprised of tough chick Addison (Emmanuelle Vaugier, "Secondhand Lions"), shrinking violet Laura (Beverley Mitchell, "The Crow: City of Angels," TV's "Seventh Heaven") and the first "Saw's" Amanda (Shawnee Smith, TV's "Becker," "Saw"), the experienced survivor back to play another round. Jigsaw turns the screws tighter on Mathews by telling him all these people are connected as he used false evidence to prosecute them all and his son's in their midst. Bousman flips back and forth between Jigsaw and the cops and Jigsaws' latest guinea pigs with little excitement. The killer's clues aren't very ingenious nor is there much reason for his victims' connection. In lieu of any real suspense, Bousman employs a type of 'countdown' editing that flashes images implying gory demises as people get picked off. The 'surprise twist' combines gags from previous films and devolves into a big so what. The film's humor is derived from such unsubtle in jokes as Kramer directing Mathew to the 'last house on the left.' Acting is pedestrian. Noam Jenkins ("The Statement") gets appropriately worked up as Jigsaw's opening victim, but everyone else is just dead meat. The usually reliable Wahlberg is pretty lifeless here. Shawnee Smith and Erik Knudsen attain some level of rapport, but not enough to make you really care. Tobin Bell loses a considerable amount of his scare factor when not hiding behind his evil robotic clown persona. "Saw II" represents nothing more than a cash-in gambit sure to return on its low-budget investment. Cary Elwes, you are missed.