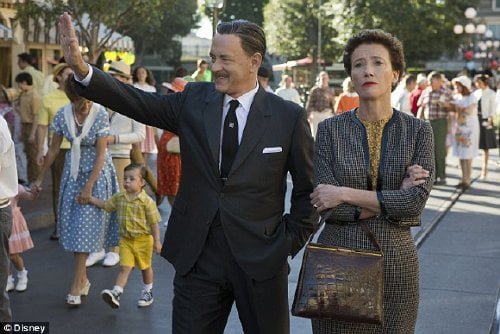 After his daughters became enamored with P.L. Travers's (Emma Thompson) 'Mary Poppins," Walt Disney (Tom Hanks) promised them he would turn it into a movie, but the author recoiled from the idea adapting her very personal book through Disney's saccharine vision. In 1961, some twenty years later, Travers's business manager suggested her financial status demanded she reconsider, and so Travers traveled from London to L.A. to be courted by Disney and his team. She proved a doozy, arguing every small detail, nixing animation and even the color red, but in the end Walt figured out that her real agenda was "Saving Mr. Banks."

I've always hated the movie "Mary Poppins." When it opened at a local theater in 1964, my mother was excited to see it and dragged me to it on its opening Friday night, which would mean I'd miss my beloved 'Addams Family' on TV. The musical didn't win me over. But "Saving Mr. Banks," written by Kelly Marcel and Sue Smith and directed by John Lee Hancock ("The Rookie," "The Blind Side"), is another thing entirely, a tale of a child who loved her alcoholic dreamer of a dad so much she transformed her difficult Australian childhood (and her adult self) into an English fantasy while a Hollywood mogul persisted in figuring out how to climb over the walls she'd erected around herself. Emma Thompson, all frown lines and tight perm, is terrific as Travers, cutting and brusque on the outside, vulnerable to those who make the effort to look deeper. The first and most important of these is Ralph (Paul Giamatti in a quietly compassionate performance), the driver assigned for her L.A. stay. Like Disney with purer intentions, Ralph lets the author's rudeness slide while quietly observing her moments of melancholy. Ralph will break through with the story of his own child whereas Disney finds parallels with his own father. The film can be quite funny. On her arrival at the Beverly Hills Hotel, Travers is horrified by the Disneyfication of her suite, stuffing Mickey in a closet and commiserating with the plight of A.A. Milne. Travers's aversion to the American habit of using first names gets her the moniker of 'Mrs.' from Ralph, which amusingly just increases her frustration. When introduced to legendary songwriting brothers Robert (B.J. Novak) Richard Sherman (Jason Schwartzman) by screenwriter/storyboard artist Don DaGradi (Bradley Whitford), Travers simply bypasses the introduction declaring her work is not a musical. One could cut the tension within the Disney offices with a knife, but it's Travers who's wielding it. A visit to Disneyland is a study in contrasting body language between Hanks and Thompson. But as we see the Disney team's presentation of their adaptation in 1961, Travers recalls the incidents which inspired her tale and we flash back to 1906 Queensland, where Travers Goff (an excellent Colin Farrell) is putting his usual optimistic spin on a situation which is anything but happy, moving his overwhelmed wife Margaret (Michelle Monaghan lookalike Ruth Wilson) and two young daughters to rural, isolated Allora after losing yet another bank job. As it seems more and more unlikely Travers will release the rights to her book to Disney, we get deeper and deeper into how as a young child nicknamed Ginty (Annie Rose Buckley), the author stood by her father through some horrific scenes. The movie's most chilling moment, beautifully realized by Hancock, sees Ginty wading into a river to save her mother from a Virginia Woolf-like suicide attempt as her father lay dying of his disease. It was this cry for help that brought Margaret's sister Ellie (Rachel Griffiths) to efficiently put the Groffs' house back in order (the Bankses in 'Mary Poppins'), distracting the children with chores. The two story strands flow into and out of each other with ease, the flashbacks providing a psychological rationale for Travers's seemingly inexplicable behavior. There are also peeks at the original film itself and while they only cement my original opinion, it's difficult not to get caught up in the Shermans' songs, especially Disney's favorite, the melancholy 'Feed the Birds.' 'Let's Go Fly a Kite' breaks down the author's defenses, although as depicted here, it is a bit abrupt. Hanks is good in essence as the character although one never forgets who one is looking at. Buckley is saddled with the same issue, never convincing as the child who grew up to become Thompson. Support also includes Kathy Baker as Disney's forthright sounding board and Melanie Paxon as his chirpy secretary Dolly (costumed a little too obviously like Snow White). "Saving Mr. Banks" is a solid entertainment based upon a most unusual true tale. It might not have convinced me to give "Mary Poppins" another look, but it sure made the book itself sound a lot more intriguing.

By 1961, Walt Disney (Tom Hanks) had tried, unsuccessfully for some 20 years, to acquire the screen rights for the beloved children’s story, Mary Poppins. Time and circumstance have changed for the book’s author, PJ Travers (Emma Thompson), though, and she needs the money from the sale of the book’s rights to Walt. However, she wants the film made her way – no songs, no dancing, no animation. Walt has his work cut out for him as he goes about trying to change Travers’ mind and “Saving Mr. Banks.” As one can expect from Walt Disney Studios when they get their hands on a prestige project that showcases an iconic moment in Disney history, “Saving Mr. Banks” is a feel good flick that makes good use of its star Emma Thompson as the eccentric, demanding and formal PJ Travers. Thompson embodies the vedy, vedy British sensibility of Travers and she puts a good arc on her character as Disney brings out all guns to bear to convince the stubborn author to make “Mary Poppins” his way. This battle of wills and wits make the story for “Saving Mr. Banks” a charmer. There are actually two stories being told in “Saving Mr. Banks.” Beside the trials and tribulations of getting “Mary Poppins” made, director John Lee Hancock and co-scribes Kelly Marcel also delves into Travers’ formative years as a young girl growing up in the Australian outback. Travers’ reflections during the Disney negotiations show Helen Goff and her family and all appears idyllic for the young girl. As Helen’s story unfolds – her father, Travers (Colin Farrell), is an alcoholic who has an attitude toward authority, forcing the family to move from one town to another. The sometimes tragic events of Helen’s young life color both P.J. Travers and her seminal children’s story. The frequent flashbacks lend to answer the question of why P.J. Travers resisted the Disney overtures to make the adaptation Walt’s way. Travers is a stone wall when she first arrives and demands that “Mary Poppins does not sing,” period. She is assigned to writer-artist Don DeGradi (Bradley Whitford) and song-meisters Richard and Robert Sherman (Jason Schwartzman and B.J. Novak) to act as script consultant and this proves to be a fortuitous pairing. These guys are the spoon full of sugar that make the medicine of compromise go down as Travers eventually accepts the song, dance and animation that made “Mary Poppins” a classic. The acting is top notch throughout the film. Emma Thompson gives life to the curmudgeonly Travers and makes her transformation both believable and touching. Tom Hanks, of course, wears his cloak of Walt Disney’s persona with his usual acting expertise. Whitford, Schwartzman and Novak are excellent in their roles as they form the songs and artistic look that would become “Mary Poppins.” Paul Giamatti is quite sympathetic as Travers’ limousine driver as he slowly, over the course of Travers’ two-week visit to Disney Studios, helps melt her formal reserve, especially when he asks her to autograph his daughter’s often read copy of her book. Kathy Baker is cast in the small cameo role as Walt’s secretary, Tommie. Production, as one would expect from a Disney film about Walt Disney, is first rate, from costume to sets to, of course, Disneyland. The period details of “Saving Mr. Banks” have the look and feel of 1961 Hollywood, making the combination of acting and art direction a seamless melding. It is a fun piece of work that does what Walt Disney did best – entertain.