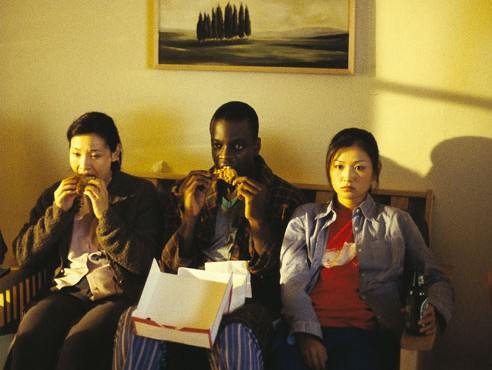 Wil (Michelle Krusiec, "Cursed," "Duplex"), a young and talented surgeon, has been putting up with her mother's (Joan Chen, "What's Cooking?") attempts at matchmaking at the local Asian community center dances, but Wil's only been interested in the provocative Vivian Shing (Lynn Chen). Just as she begins a secret romance, Wil's widowed Ma discovers she is pregnant and must move in with her as outraged Grandpa (Wai Gung) busies himself "Saving Face."

Writer/director Alice Wu, heavily under the influence of early Ang Lee ("Hulk," "Crouching Tiger, Hidden Dragon"), whips up a modern day confection that pits the traditional generation against the modern one in New York City's Chinatown. A hugely charismatic performance from a glowing Joan Chen makes this cliched little comedy seem a whole lot fresher than it really is. "Saving Face" is, pure and simple, a crowd pleaser. Ma's the type who slips Norman (David Shih) a twenty to get Wil out onto the dance floor for the inspection of other prospects. Norman picks up on Wil's repressed lesbian vibes, but Grandma (Guang Lan Koh) thinks her severe outfit is charmingly like what she herself wore during the revolution. Wil would never approach another woman in the traditional environment, so Vivian, a ballet dancer who'd rather dance modern, approaches Wil in the hallways of her work place, the hospital. Unbeknownst to Wil, Vivian is her boss's daughter. Meanwhile Little Yu (Brian Yang), dispatched by Ma, meets Wil in the subway each day to deliver his father, Old Yu's (Mao Zhao), herbal matchmaking potions. When her disgraced Ma moves in, Wil is forced to put up with redecorating, Chinese soap operas and Ma's racial distrust of her black friend and neighbor Jay (Ato Essandoh, "Garden State"). Little Yu begins to bring a second package for Ma's pregnancy. Grandpa, looking for a husband for his daughter in order that he might save face, encourages the smitten Stimson Cho (Nathanel Geng, "Combination Platter") who begins to court ma. Looking for an out, Ma uncomfortably begins a series of comical first dates. Meanwhile, Vivian is pushing for Wil to recognize their relationship. The whole double drama climaxes when Vivian is offered a four year contract with the Paris Opera Ballet and Ma, having never identified her baby's father, caves and accepts Cho's proposal. In Ang Lee's "The Wedding Banquet," a young gay man agrees to marry a woman to satisfy his visiting Chinese parents. Wu takes the lesbian route, with Wil hiding her true sexual calling beneath a veneer of work and the occasional heterosexual date. But Wil's romance isn't particularly engaging. The pleasures of "Saving Face" are all in Ma's story. Wu has written a great character in Ma, caught as she is between the strong traditions of her parents and the Americanized world of her daughter that she is thrust into. Ma makes herself safe by hanging red curtains, watching Chinese videos and asking Wil to serve her friend Jay his dinner on a paper plate so as not to be exposed to his black skin (stained, Ma says, by the soy sauce he uses too much of). Essandoh is strong support as the cliched gay friend - his chemistry with Chen is hilarious and watching the two become friends is highly satisfying. The luminous Chen, so wary, so divided and ultimately so blissful, is a joy to watch. Krusiec does what she can with her rather spineless overachiever. Lynn Chen shows a lot more backbone and is the more intriguing character of the two lovers. Clare Sum is amusing in another cliched role, that of Mrs. Wong, a pushy, materialistic mom. Visually, the film is straightforward, grouping characters in twos and threes mostly in interior locations. Taking a cue from the early community center dance (as well as Vivian's calling), various types of dance music is effectively used throughout the film. "Saving Face" once again mines earlier Lee ("Eat Drink Man Woman") for its climatic surprise, but even if you see it coming, the happy epilogue will send you out of the theater with a smile on your face. This is a solid little effort from Wu and a comic tour de force from her middle-aged star.

For 28-year Wilhelmina “Wil” Pang (Michelle Krusiec), life is divided between her career as a promising New York City surgeon and her family living in the Chinese community in Flushing, Queens. Weekly visits to her widowed mother (Joan Chen) are punctuated with matchmaking dances held to pair unmarried singles but Ma does not know that her daughter couldn’t care less about male companionship in “Saving Face.” Wil dutifully returns home every week and attends the obligatory socials aimed at pairing her with a likely partner. Unknown to her mother is the budding relationship between the pretty surgeon and a beautiful dancer, Vivian (Lynn Chen), which is heading down a serious path. But Wil isn’t prepared for a major life change when Ma shows up on her doorstep – pregnant and in disgrace. Now, the young physician must combine her two, very different worlds but may lose Vivian unless she comes out of the closet. The absolutely best thing “Saving Face” has going for it is the outstanding performance by Joan Chen as Ma. The actress has had a rather eclectic career, from empress in Bernardo Bertolucci’s “The Last Emperor” to Josie in David Lynch’s TV series, “Twin Peaks.” She also made a splash, internationally, with her directing debut, “Xiu Xiu: The Sent-Down Girl.” Here, as a still youthful widow who has a lust for life (tempered by the restraints of the Chinese community), Chen gives a richly defined performance that, unfortunately or not, overshadows that of her two young costars. Chen’s maturity and dimension as an actor make hers the most compelling part of “Saving Face” as pregnant, vivacious Ma. The main story, the burgeoning romance between Wilhelmina and Vivian, is a typical boy-meets-girl, boy-gets-girl, boy-loses-girl, boy-gets-girl-again story except it’s girl and girl in this clash of cultures, lesbian flick. The two leads are very attractive and easy on the eye and look good together but the actors, either due to their lack of experience, the direction or the script (both by fledgling writer/helmer Alice Wu) or a combination of the three things, keep the primary story non-involving - but the pretty actresses are nice to look at. The supporting cast is more fully developed with the denizens of Ma’s neighborhood and Wil’s friend and neighbor, Jay (Ato Essandoh), giving pleasant shrift to the background cast, helping the less-intriguing main story along. Techs are also well done with Harlan Bosmajian’s putting his lens to good use capturing the attractive leads in the best light. Alice Wu’s Ang Lee-lite script borrows heavily from the Taiwanese filmmaker in both substance and style. There isn’t much original about “Saving Face,” except for Joan Chen’s performance as Ma and a nice look into Chinese American life. Wil’s story and her romance with Vivian will attract the gay demographic but it is Chen who makes the film appeal more broadly. It’s a sweet, little, multi-level love story and its heart is the right place.