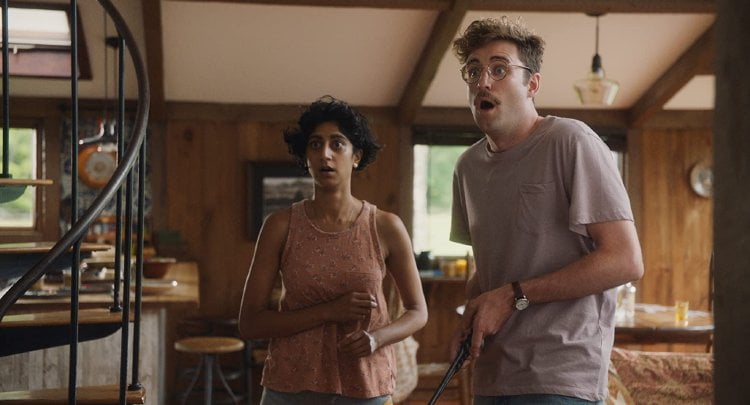 New Yorkers Jack (John Reynolds, TV's 'Stranger Things,' 'Search Party') and Su’s (Sunita Mani, "Madeline's Madeline," TV's 'Glow') argument over his having mistakenly closed her ten browser tabs highlights a more serious issue – both are aimlessly plodding along in life.  A visit from Raph (Ben Sinclair, HBO's 'High Maintenance'), an investment banker who quit his job to follow his dream of 3D printing surf boards using algae, inspires them and his offer of his grandfather’s cabin that he’s been renovating gives them the perfect place to recharge.  Even nestled in rejuvenating nature, Jack’s laid back approach is soon clashing with Su’s need to plan and act, but an alien invasion will find them working in perfect sync in “Save Yourselves!”

Writer/directors Alex Huston Fischer and Eleanor Wilson’s feature debut isn’t especially original, its aliens Star Trek Tribbles in everything but name.  What it does get right is relationship comedy and its two stars are the perfect pairing of affectionate opposites.  Mani and Reynolds wield witty dialogue (the line ‘The poof is in the cabin’ may be my favorite of 2020) with crack comedic timing, making “Save Yourselves!” a delightfully goofball entertainment.

There’s also a fish-out-of-water element as the two urbanites fail to notice early signs that things are not quite right.  We see the contrails in the daytime sky which they do not and when the spaceships begin to land at night Su and Jack are delighted by ‘shooting stars,’ despite their unnatural trajectories.  Once they begin to suspect something is amiss, Su must confess having accessed her Smartphone and while Jack is initially more upset over her having broken one of their rules for the week, he’s refocused when they begin to listen to and read a series of increasingly dire messages from back home.

But it is Jack and Su’s differences which drive the comedy, Jack’s admittance that he’s ‘not a man,’ as in having no mechanical skills whatsoever, forcing Su into warrior mode, even if she’s only had one lesson driving ‘a stick.’  Forced to grapple with the moral decision over what to do about an abandoned squalling infant gives the couple yet another new direction.

“Save Yourselves!” may run out of inspiration as it builds to its climax, but Jack and Su’s dysfunctional panic is classic screwball comedy.

Jack (John Reynolds) and Su (Sunita Mani) just discovered, to their shock and dismay, that they, like their friends, are slaves to technology – AKA, their phones. A friend, Raph (Ben Sinclair), offers them the perfect solution – his granddad has a remote tech-free cottage, a place detached from the constant distractions of the internet. But, their break from society just so happens to coincide with an alien invasion in “Save Yourselves!”

First-time feature writing/directing team, Eleanor Wilson and Alex Huston Fischer, create a goofy and funny tale about two people, clueless outside their tiny life bubble and thrust into an extraordinary human crisis. Do not expect, however, a brave young couple doing battle with marauding aliens to save mankind.

Jack and Su take up Raph’s generous offer and head north from crowded Manhattan to the wilds of the upstate. Once there, they vow to turn off their phones for one week and free themselves from their obsessive devotion to that all-consuming device. Too bad, since this is about the time that ethanol is mysteriously disappearing from liquor bottles, a sour dough starter and even from cars – you know, gasoline.

Then the first “poof” appears in the cottage – it looks and trills like an overgrown tribble (see the episode from the original “Star Trek” TV series called “The Trouble with Tribbles." The poofs, though, seem to have a drinking problem and are draining all the alcohol they can get their suckers on.

This amusing earth-threatened-by-alien-invaders tale is both offbeat sci-fi story and a vaudevillian pair of performances by the film’s two stars. The old saying, “drama is easy, comedy is hard” shows that John Reynolds and Sunita Mani have both on screen chemistry and capable comedy chops. While the alien invasion is the hook, it is their duo performance that lands the fish.