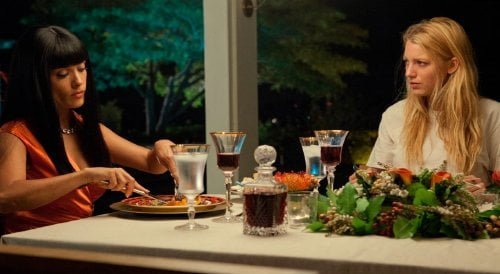 In Laguna Beach, O (Blake Lively, "The Town") lives with her two lovers, former Navy SEAL and ex mercenary Chon (Taylor Kitsch, "Battleship") and botanist Ben (Aaron Johnson, "Kick-Ass," "Albert Nobbs") who have created a very sought after strain of marijuana. This brings them to the attention of Elena La Reina (Salma Hayek), the head of a Mexican Baja Cartel, who demands a partnership and promises that if they will not oblige they will get down in the dirt with "Savages."

This may be cowriter (with Shane Salerno and the novel's Don Winslow)/director Oliver Stone's most exuberantly trashy flick since 1997's "U Turn," with which it has quite a bit in common. But this one suffers from some dumb plotting and dialogue and a cheap shot ending that keeps it second-tier Stone. Still, this offbeat cast, a mix of not-quite-provens, Oscar bait and movie stars, really works it and director of photography Dan Mindel ("Star Trek," "John Carter") succeeds in making Laguna look like a paradise peopled with striking youth in colorful clothing living in glass towers juxtaposed with a snuff film study of a hellish, sweaty, gasoline soaked Tijuana. Oddly, for such a drug-soaked film, Stone never slips into his signature trippy visuals, instead indulging his penchant for quick and grisly violence. The film is bookended by narration from O setting up and winding down the story and Lively must utter most of the film's howlers ('I had orgasms, he had wargasms.'). In fact, O's initial pronouncement, that even though she's telling the story doesn't mean she'll be alive at the end of it, is an uh-oh moment, one that announces Stone might just be shy of really throwing down his gauntlet. But it's everything in the middle that counts. So rich girl O is living the dream with her two halves of a whole man - one made of 'steel,' the fighter and one of 'wood,' the lover. It's never really clear how the charitable hippie botanist and ruthless killer became such buddies, but surprise - Kitsch finally registers as a real personality and he shares an easy camaraderie with Johnson, also good, so that we can buy these two if not quite the threesome (O seems like a nice enough woman, but she's been handed everything on a platter and doesn't appear to be particularly deep or bright.). Just as Ben's returning from a trip to help third world villagers, the trio gets a nasty surprise - a message demanding a meeting to discuss a deal featuring the chainsaw beheadings of six men. Chon wants to go in guns blazing with a first strike. Ben just wants to turn them down. They try the latter and it doesn't work, so they decide to make a run for it, but before they can leave, La Reina gets them where it hurts, kidnapping O. The boys agree to deliver 300 lbs. of their primo product (it has a 33% THC level, about 6 times the norm) just to get back the deal they didn't want in the first place. After Ben negotiates a payout to get O back for more money than they have, they go in deep, setting up Elena's own men in a sting. This is one of those multi-level double/triple/quadruple cross movies where the only ones who can hope to come out unscathed are those whose loyalties can be bought and sold. Perhaps that's why the film's biggest pleasures come from Benicio Del Toro, here playing on the opposite side of the Mexican drug trade from his Oscar winning "Traffic" role as Elena's savage enforcer Lado, the guy wielding that chainsaw as the film opens, and John Travolta as slick but squirmy DEA agent Dennis. Hayek is also effective, especially in her interactions with O - she sums up the girl's entire problem waving a lamb chop about between bites. There's some good stuff in here, like the parallels between rich, single mothers and their privileged daughters (Elena's Magda (Sandra Echeverría, "Casa de mi Padre") talks to her mom on the phone as she unknowingly crosses paths with the woman her mom's goons are tailing - O - in a high end shopping mall) and how everyone can come undone over their children. But there's also too many lazy moves - O's allowed out shopping on the likeliest day for a kidnapping with one of Chon's snipers - in a separate vehicle. Ben and Chon are under surveillance by La Reina - except for the night they hit one of her stations, taking out a half dozen men and $3 mil. The ending just about cancels out the entire film's raison d'etre. The film's weird sense of humor, gritty skullduggery and tony production make it worthwhile nonetheless. Original Music by Adam Peters ("South of the Border") goes from Indian mystic to synth clap-along and is complemented by song choices like an ironic easy listening version of "Psycho Killer." Sure the central three are less interesting than the bad guys, but a good or conflicted villain is almost always more fun. Also along for this ride are Oscar nominee Demián Bichir ("A Better Life") as Elena's ill-fated lawyer, Emile Hirsch ("Into the Wild") as Ben and Chon's surfer style money launderer and "Duck Season's" Diego Cataño as the too sympathetic Lado protege Esteban. "Savages" isn't vintage Stone, but he's having a good time. It's his version of a beach read.