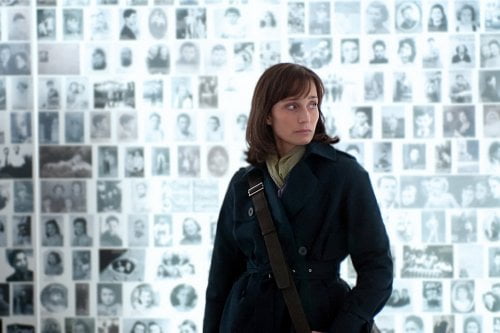 On 16,17 August 1942, 13000 Jews living in a small French town near Paris were rounded up, locked up in the Vendome Stadium without food, water or bathrooms in what became known as the infamous Vel’ d’Hiv Roundup. Then, the inmates were loaded into cattle cars and carried off to their deaths in German concentration camps. However, it was not the Nazis that rounded up the French Jews, it was the Vichy French government. This horror is seen through the eyes of a ten-year old girl who rests her hope in “Sarah’s Key.”

American journalist Julia Jarmond (Kristin Scott Thomas, "Nowhere Boy") pitches a story to her Parisian editor about July 16, 1942, when the French rounded up Jews, held them in deplorable conditions in the Winter Velodrome, then shipped the survivors off to camps. Then she makes a horrifying discovery - the apartment her husband Bertrand (Frédéric Pierrot, Scott Thomas's "I've Loved You So Long" costar) inherited from his parents and is renovating for their family was the site of a tragedy and Julia is tied to the events she is writing about by "Sarah's Key." Adapted from Tatiana De Rosnay's best-selling French novel by cowriter (with Serge Joncour)/director Gilles Paquet-Brenner, "Sarah's Key" suffers from disjointed story-telling and strange choices made in the adaptation (the decision to continue Sarah's story was a good one, the choices the character makes don't jibe, however). The events of 1942 are well played dramatically and Paquet-Brenner finds both the emotional heft and sense of national betrayal, but the story stops and starts too often and Jarmond's abhorrence of the old Starzynski apartment tied to a marriage-breaking late pregnancy is over-the-top. The film begins with then ten-year-old Sarah Starzynski (Mélusine Mayance, "Ricky") giggling under the bed covers with her younger, angelic looking brother Michel (Paul Mercier). It will be the last moment of childhood innocence. French police arrive at the door, mama (Natasha Mashkevich) insists she does not know where her husband is and Sarah uses the time to lock Michel in a hidden cupboard. When she attempts to get the key to the building concierge (Serpentine Teyssier, so matter-of-factly sinister), the woman outs the location of the Jewish men in hiding. Sarah continues her quest to free her brother from a missed opportunity at the Velodrome to the kindness of farmers (Niels Arestrup, "A Prophet" and Dominique Frot, "Inside") who take her in after she escapes the camps. Back in the present, Michel's fate is contrasted with Julia's late pregnancy, an event which thrills her, but not her husband (the couple have a teenaged daughter). As Julia delves into the events at the Velodrome, she spies an address which makes her heart stop. She gets the story of Sarah and Michel from her father-in-law Édouard (Michel Duchaussoy, "Mesrine: Killer Instinct") who makes her promise to keep it from his wife (Gisèle Casadesus, "My Afternoons with Marguerite"). Julia becomes obsessed with tracking down Sarah. But Julia's obsessions are overwrought. If there were thousands of Jews deported from Paris via the Velodrome, it stands to reason that many apartments, perhaps even the one she currently lives in, used to house them. It is not the real estate that is responsible nor did her husband's family wittingly benefit from the event. When she finally discovers what happened to Sarah, the girl's choices make no sense and when she tries to present them to Sarah's son, William Rainsferd (Aidan Quinn, "Unknown"), his initial reaction is also dramatically manipulative. One year later (there we go again with the time shifting title cards, overused to the point of laughability), he almost has an emotional breakdown when he learns the name of Julia's daughter. "Sarah's Key" tries too hard and fails in tying events of the past to Julia's present and the filmmakers have used some strange psychology in Sarah's adult decisions. Perhaps most inexplicable is why she would have kept the key which opened the door to horror other than to provide the film its title.

Lately, it seems, there are a lot of movies that use the flash back, flash forward device to span decades or, even, centuries, telling a story of some past time then jumping ahead to modern days where the past is linked to the present. “Sarah’s Key” is one of those films and, like others before, the past thread of the film is far more intriguing than the present. In modern Paris, a journalist, Julia Jarmond (Kristin Scott Thomas), nabs a prestigious assignment for the architecture magazine she works for. The building that her husband, Bertrand, is restoring is tied to the dreaded Roundup, a shameful moment in French history that few want to talk about. Her investigation uncovers a tie between Bertrand’s family and the questionable way they acquired their property in August of 1942. This storyline in “Sarah’s Key” is more of a soap opera than drama, with Julie becoming unexpectedly pregnant after several miscarriages and Bertrand’s selfish desire that she get an abortion. I found that I did not care for the modern day characters and this deflates the impact of the riveting story from the past. Sarah’s story, at least the early part of it where young Sarah, trying to save her younger brother from the Roundup by locking him in a closet in their home, is torn away from her father, then her mother by the Vichy police. She holds the key to the closet as a talisman and is obsessed with escaping her prison and saving her little brother, Michel. This story of survival, as Sarah works her way back to town to rescue young Michel, grabs you by the throat as she must rely on the kindness of strangers to help her fulfill her rescue mission. As Sarah and her story mature, though, my interest in her and her life began to wane. There is a great story here in young Sarah’s plight of being torn from the bosom of her family and quest to rescue her young brother, but this is only one part of “Sarah’s Key.” The remainder of the film lacks intrigue as it mixes Julia’s investigation into Sarah’s and, subsequently, her husband’s family’s questionable past, her unexpected pregnancy and marital problems splinters the modern story. I did not care about Julia and those around her.