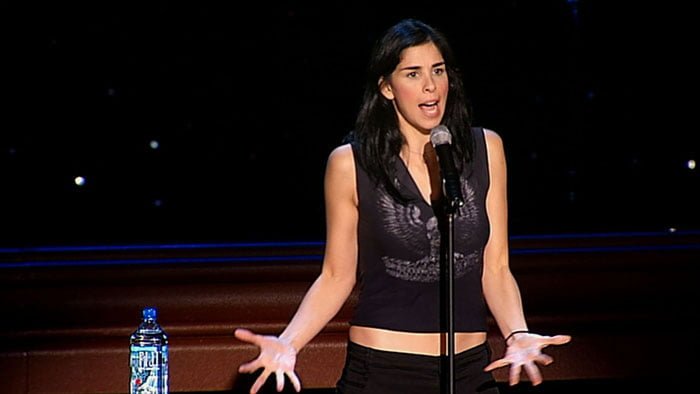 Comedy writer, sometime actress, comedienne Sarah Silverman likes to think of herself as a 'dirty' Jew with silver screen sex appeal. When her friends (sister Laura Silverman, "State and Main," and Brian Posehn, "The Devil's Rejects") visit with news of their blossoming entertainment projects, Sarah retaliates with a big one - it's like a play AND a movie, she says, it's about AIDs and the Holocaust...but it's funny! And, it's a musical! And the sold-out show is premiering tonight! With her friends expecting to watch from the wings, Sarah Silverman makes good on her fib with "Jesus Is Magic."

And that bit of rather forced comedy is trotted out a few more times, padding out what could have been a really good short concert documentary into a so-so collection of comedy sketches. Sarah Silverman of the flawless skin and foul mouth is a very funny lady when she's on stage working an audience, but her acted bits, like a fake Diva flip out over Fiji water, do nothing but make one wonder why the star goes to such lengths to parody star-like behavior - doth she protest too much? Yes, Sarah actually does work in the Holocaust ('Nazis are a*h%*#!s, but they're so cute when they're little') and AIDs (she motivates her niece by telling her every time she doesn't win at tag, an angel will get it) and make them funny, as is her response to Osama Bin Laden and the moment she realizes she's becoming her mother, but she should leave the musical comedy to fellow New Hampshirite Adam Sandler. Silverman rhymes 'all right' with 'tonight' and sings 'You're Gonna Die Soon' with conviction at a nursing home, inspiring nothing but embarrassment for the performer. The song stagings show more attention to costume than lyrical content. These indulgences are unfortunate because Silverman's stand-up can be so inspired. She sets up a controversial idea then pulls the comedy out of the inane part, catching you unawares with left-fielded zingers. Silverman was one of the highlights of the recent "The Aristocrats," a great advertisement for this well-timed star vehicle. If only "Jesus Is Magic" had stuck with the jokes.

While I enjoy a good standup comedy routine, I can’t say that I am a “fan” of the genre. And, I had little exposure to the comedy of Sarah Silverman, save her brief but notably shocking performance in the outrageous comedian documentary, “The Aristocrats.” Sarah Silverman: Jesus is Magic” is a 40 minute standup comedy routing padded to 72 minutes using staged bits with sister Laura and Bob Odenkirk and several kitchie musical numbers. The total is less than the sum of the parts. Silverman’s comedy is aimed at pushing the button of sacred cows as 9/11, AIDs. sex and using the taboo word “nigger” versus the acceptable word “chink.” Her comedy targets the college and twenty-something crowd and will likely have a draw for that demographic. But, beyond this faction, I don’t see a broader appeal beyond, say, age 35. One thing that bugs me about standup comedy today is its lack of story telling. Comedy now, and Silverman’s routine is a prime example, relies on shock and one or two liners. There are few if any comedians these days that actually tell a story, as both Bill Cosby and Flip Wilson did so expertly decades ago, which actually involves the audience. Jesus is Magic” is of a caliber that would have been better left for an hour-long HBO comedy special. The extra material is too cute to warrant it as an integral part of a concert movie. Silverman standup routine, minus the mostly inane and not very funny padding, isn’t nearly enough justify a feature comedy concert release. Maybe Sarah is an acquired taste that I haven’t acquired.