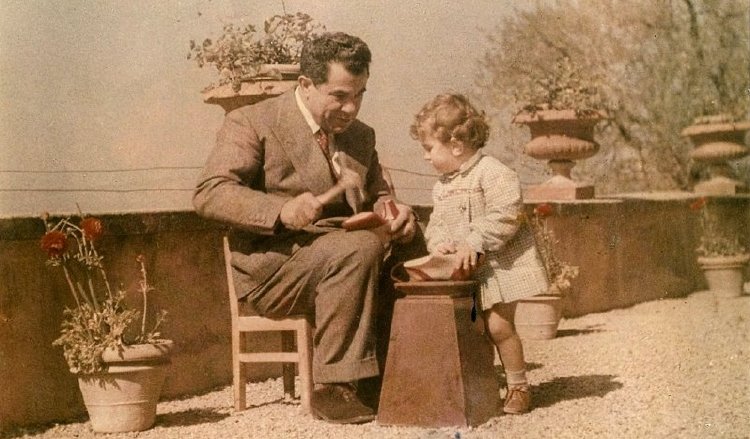 In 1898 in the small village of Bonito, Italy, the eleventh child of the Ferragamo family was born to wheat and olive farmers.  But by the age of nine this boy already knew his calling, spending his days in the local shop of Luigi, the cobbler, and after his father died a year later, left for Naples to further his craft apprenticeship.  At twelve, he created his own business, then emigrated to the U.S. at sixteen where a brother worked in a Boston shoe manufacturing company.  But while he found mass production interesting, their product was far below Ferragamo’s standards, so he headed west, getting a foothold in the burgeoning movie industry where he became “Salvatore: Shoemaker of Dreams.”

"Call Me By Your Name" director Luca Guadagnino reflects patriotic pride with his flawed yet fascinating portrayal of a man, his trade, his innovations and their impact on the movie business and Hollywood glamour.  Armed by the archives of The Salvatore Ferragamo Museum and the Ferragamo Foundation, which includes 100 year-old archival footage and a 1958 audio recording of Salvatore which Guadagnino juxtaposes with his “Call Me” star Michael Stuhlbarg reading from the man’s 1955 memoir, the filmmaker stitches together the story of a man who literally pulled himself up by his boots.

Once we get past some overly indulgent passing landscape footage of Ferragamo’s train journey across the U.S., we’re introduced to The Flying A Studio in Santa Barbara where Salvatore became fascinated by cowboy boots and once he started making them, the stars started lining up, impressed by the comfort and quality of boots that prior makers couldn’t get to fit right.  Ferragamo was fascinated by the physiology of the human foot, even taking anatomy classes in order to achieve the proper balance in the construction of his shoes, determining that the body’s weight was supported by the arch and that there were six different widths to consider.

He created thousands of patents over the years for such innovations as his cage heel, even creating one for a medical leg split when his was broken in two places in a bad car accident that cost him a brother (Guadagnino flashes a news clipping about the incident by, where quick readers will see Salvatore was racing a train at the time, something the filmmaker fails to mention).  When the film industry picked up and moved to Hollywood, Ferragamo followed, his clients including Gloria Swanson, Mary Pickford, Greta Garbo, Pola Negri and Valentino.  He made Douglas Fairbanks’s curled toe shoes for “The Thief of Baghdad” and the vampy streetwalker heels worn by Joan Crawford as Sadie Thompson.

He’d return to Italy in 1927, settling in Florence where he created an assembly line of artisans, producing shoes for export.   World events would find him in bankruptcy, but there was no keeping Salvatore down and he gambled on the purchase of Florence’s 13th-century Palazzo Spini Feroni where his business once again took hold.  Post-war, he would win the fashion ‘Oscar’ for his ‘naked shoe’ in 1947, the same year Dior won for his New Look.  His client list would now include Audrey Hepburn, Marilyn Monroe, Bette Davis, Rita Hayworth, and Ingrid Bergman.

Guadagnino interviews multiple experts in the present day and can be seen sitting across from film critics Jay Weissberg and Todd McCarthy as he chats with them.  He also talks to other famous shoemakers like Manolo Blahnik and Christian Louboutin and fashionistas Grace Coddington and Suzy Menkes (the latter adding little).  Martin Scorsese also appears several times and like the behind the scenes workings of a “Casino,” we see the creation of Ferragamo’s outrageous rainbow shoe, created for Judy Garland, from start to finish (Ferragamo did not create her “Wizard of Oz” ruby red slippers, although the film begins with the creation of a similar shoe).

Guadagnino’s ending oddly trails off with Ferragamo’s death without indicating his age or how he died, the filmmaker stitching together a series of home movies of Salvatore’s beloved wife Wanda with their daughters, again without acknowledging how she took over his business and made it thrive.  But he saves an oddball treat for last, a Busby Berkeley-esque ‘shoe ballet’ starring some of the man’s most fabulous creations by stop motion animator Pes.

Salvatore Ferragamo, a cobbler’s apprentice in Italy, came to America as a boy with his family around the turn of the 20th century. He found his way to Los Angeles by way of Santa Barbara and plied his shoemaking trade. The quality of his work soon garnered the attention of the budding Hollywood film community and he became “Salvatore: Shoemaker of Dreams.”

I am not a fashion kind of guy so I went into Salvatore Ferragamo bio-doc with an open mind and a child-like interest in learning something new. While I knew of Ferragamo shoes as a brand, I knew nothing of the man, his life and, particularly, his shoes.

Director Luca Guadagnino rectifies my lacking and presents a detailed biography about Salvatore, his young life immigrating to America to ply what at home is a humble trade – making shoes. That changed when he left Boston and relocated to Santa Barbara the LA where the movie business was beginning to take off.

He begins his famous career by, first, making cowboy boots for westerns. Then, his quality work became apparent to the new Hollywood royalty and he began making shoes for the stars. Look up a list of his Hollywood clients and you will be impressed with such names as Gloria Swanson and Judy Garland, among many others.

Time is given to display Ferragamo’s most famous design, The Rainbow, he created to honor Garland and her memorable song, “Over the Rainbow.” In a mesmerizing, almost hypnotic scene, we get to see a pair of the multi-colored platform shoes made, by hand, and from scratch.

The filmmakers only touch upon the possible politics involved when Ferragamo return to Mussolini’s Fascist-controlled Italy, where his company flourished until the Great Depression. But, the plucky cobbler came back and assumed his role as the Shoemaker to the Stars until his death in 1960.

The last 20 minutes of “Shoemaker of Dreams” is about the family and business after his death but it felt tacked on and did nothing except to say the family business is still going strong. Sit through the end credits and you get a treat – a montage of all of Salvatore’s shoes on display.