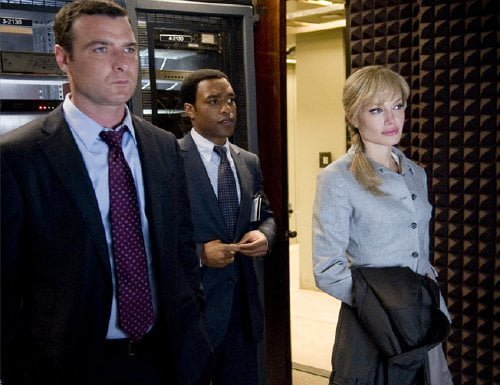 When a CIA officer is accused of being a Russian spy, she goes on the run. Former colleagues and enemies both can no longer be trusted by her as she struggles to prove the makeup of her identity as Evelyn "Salt."

A first class director, Phillip Noyce ("Patriot Games," "The Quiet American"), and a first class female action star, Angelina Jolie (taking the role originally intended for Tom Cruise), team up with a second, sometimes third-tier writer, Kurt Wimmer ("The Recruit," "Law Abiding Citizen"), and deliver a film that works more often than not. "Salt" is a well made actioner with a physically and emotionally committed Jolie performance that will please the popcorn crowd, but it doesn't have the intelligence of its forerunner, fellow Aussie director Roger Donaldson's 1987 "No Way Out." A prologue establishes Salt's grit as she's being held hostage in a North Korean prison. Denying that she's a spy, a bruised, black-eyed and bloodied Jolie is dragged out for water torture. She gets out by way of a 'swap,' escorted by colleague Ted Winter (Liev Schreiber, "Taking Woodstock," "Repo Men") who tells her her husband, a German arachnologist whom she met as part of a prior mission but who was not privy to her real job, was largely responsible for getting her out. Learning that his wife is CIA, Mike Krause (August Diehl, "Inglourious Basterds") vows that he'd rather spend his life with her than be safe. Back in present day, at the office, Evelyn is prepping for an anniversary dinner when she and Ted hear that a Russian spy has defected at their D.C. headquarters and they must question him. Orlov (Daniel Olbrychski, "The Decalogue") tells Evelyn he has cancer and then proceeds to tell the tale of how Russian children were raised in his outfit to replace American kids in a widespread sleeper cell, all to await Day X. The Russian president, who will be in New York the next day for the Vice President's funeral, will be assassinated by one of them. That person is Evelyn Salt. After demanding a phone call to warn her husband, whom she cannot reach but knows will be targeted, Evelyn manages to escape within the building. Noyce stages a terrific sequence with Peabody (Chiwetel Ejiofor, "Redbelt," "2012"), unit leader Ted's boss, shutting off sections of the building hoping to trap Salt like a rat in a maze. From this point on, the action never lets up, and Jolie is really put to the test, jumping from the roof of one moving truck to another, inching over ledges fifteen stories up, shimmying down elevator shafts and rigging multiple explosions. What she and Noyce cannot do, unfortunately, is convince us that Salt can take out three and four guys at a time, which Salt must do multiple times here. There's more sound than swing in Jolie's punches and kicks, not enough muscular thrust behind them. Wimmer's script is meant to keep us guessing and there are several switchbacks along the way but it's always rather obvious who among the cast isn't who he/she is supposed to be. Much of this could be blamed on casting. To give Wimmer credit, every time I thought I detected a hole in the plot, he turned around and plugged it up. Still, the whole thing isn't the original "No Way Out" was, instead an amalgamation of the things from the Nelson DeMille best seller "The Charm School" to the "Bourne" series. Salt 1 (this is obviously being positioned as a Jolie franchise) even ends pretty much the way the last "Bourne" film did. Overall, the film looks good, from its D.C. street chases, offices and apartments to the New York cathedral crypts and eventual White House bunker. Soft focus flash backs develop both Salt's childhood and her heart felt romance with Mike (Diehl, last seen as a Nazi threatening Inglourious Basterds, makes a strong impression in a small role). But there's a ridiculous costuming choice that zaps one right out of the movie (leaving the scene of a major accident Salt swipes a Russian fur trimmed hat from a street vendor - cut and there she is on a NYC ferry wearing not only the hat, but a perfectly matched fur-trimmed cape). A later, "Mission Impossible" style disguise is fun while more in keeping with Noyce's world. Jolie is kept appropriately dressed and mussed and, thankfully, never runs in heels. I also appreciated that the filmmakers took the time to show that a smart and beloved family pet was not being abandoned, even working the little terrier into one of Jolie's stunts. (If the filmmakers have smarts, the dog will reappear in a sequel.) "Salt" is a great Jolie vehicle made by a top notch director which, nonetheless, doesn't always convince. Still, when these two are on their game, which they are most of the time, they're at the top of the thriller action genre.