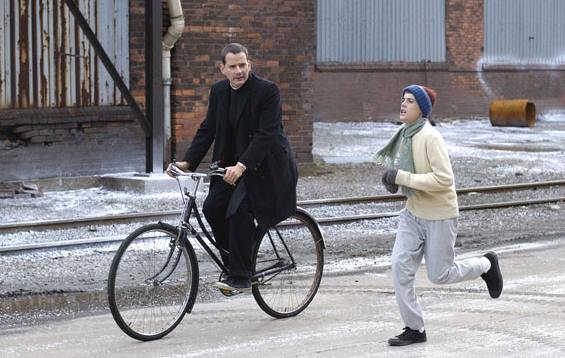 'The anarchist and the Christian have a common origin.' Friedrich Wilhelm Nietzsche

The canonization of a saint in the Catholic Church requires that the person in question has performed a miracle. Ninth grader Ralph Walker (Adam Butcher) is desperate to do something to save his gravely ill mother Emma (Shauna MacDonald, "Undercover Brother," "Time of the Wolf"), his only living parent. When Ralph's told it would be a miracle if he won the Boston Marathon, the boy begins training with the reluctant Father Hibbert (Campbell Scott, "The Secret Lives of Dentists") to take a shot at the 1954 running of the race in "Saint Ralph." Canadian writer/director Michael McGowan ("My Dog Vincent"), a former Detroit Marathon winner, gets everything right in his miraculous coming-of-age tale. "Saint Ralph" has all the elements of a sapfest waiting to happen, but it never does, instead delivering its heart with solid doses of harshness and humor. Ralph certainly doesn't start off as a saint. We're introduced to him as Father Fitzpatrick (Gordon Pinsent, "The Shipping News," "The New Red Green Show"), watching with binoculars, spies the boy smoking on school property. The fourteen year old tells Fitzpatrick's middle-aged secretary that her sweater's color makes her eyes sparkle. He's a natural charmer of women, a potential Woo Woo kid in the making. The whole school finds out he's a master of self-abuse when the pool's emptied after Ralph discovers the erotic combination of the right angle to see into the women's changing room with a water jet. Ralph's devilish streak is offset by the loving care he gives his mum, visiting her daily in the hospital. Then she slips into a coma and two events converge to give him focus - for his exploits, he's conscripted into cross country running, then, while under the influence of a minor concussion, he's convinced God tells him to run the Boston marathon to save his mother. In the background, a psychic battle ensues between the tyrannical Father Fitzpatrick and Nietzsche admiring Hibbert over the boy's future, while his love interest Claire (Tamara Hope, "Shall We Dance"), who's reserving herself for the nunnery, helps him attain the three things needed to perform a miracle - purity, prayer and faith. McGowan gets the way kids used to think about religion - the fascination with saints and rituals, the absolute rule of the black-frocked priests. When Ralph has trouble praying, Claire advises him to 'rub your knees with sandpaper 'til they bleed, then kneel in a pan of alcohol' and her ardor is presented with hilarious affection. He divides his film into monthly chapters, each featuring a Patron Saint, like October's Saint Jude, Patron of impossible causes and March's Christine, Patron Saint of lunatics, that wryly comment upon the action. And for a film about a miracle, McGowan asks for no leaps of faith - just when one begins to wonder why no adults have figured out Ralph has no guardian, Father Fitzgerald does - and is stymied by a Children's Aid Society rep who, as a former pupil, questions Fitzgerald's motivations, leaving Ralph enough breathing room to get through his climatic marathon. That, too, while including some sports movie cliches (the score, which up until this point has been jazzy, resorts to inspiration strings and, of course, the folks back home all listen to the radio with bated breath), is both thrilling ('A fourteen year old is leading the Boston marathon!') and unexpected. McGowan also shows a restrained knack for choosing music, featuring both "Goodnight, Moon" and Leonard Cohen's "Hallelujah" in just right, yet offbeat, pairings. The filmmakers have assembled a stellar cast, beginning with newcomer (and runner) Butcher, a rangy lad with self-assurance beyond his years. Only gradually does it dawn on us that the grandparents Ralph is living with are not there and Adam Butcher never makes us doubt the boy is capable of pulling this off. Physically, he's up to the task as well, whether he's supposed to be winded or to have broken through 'the wall.' Scott Campbell is great as the free-thinking Hibbert, a priest finding his way without being tortured about it. His quiet, calm rebellion against Fitzpatrick is permeated with an intelligence and mercy. Pinsent plays the 'bully' of the piece, putting up obstacles with pig-headed determination, but the actor never slides into caricature and turns around just enough at the end that his character gains respect and something like understanding. Jennifer Tilly ("The Haunted Mansion") is a surprising choice for Nurse Alice, but her compassionate caregiver provides an emotional grounding for Ralph and her surprising quirks give Tilly room to roam. Tamara Hope just radiates on screen. First seen with a natural halo of light, she's equally adept promoting religious fervor as denying adolescent hormones. The adorable, bespectacled, redheaded Michael Kanev is like an old soul in a small body as Ralph's best friend Chester. Children and their intense connection to religion has been fodder for so many films, from 1961's "Whistle Down the Wind," to this year's "Millions." McGowan's unsentimental story about a fourteen year old's faith helping him find his path in life is a terrific addition, moving, funny and smartly pitched.

Ralph Walker (Adam Butcher) is a self-assured young Catholic school teen with an excellent (if rebellious) attitude on life despite the facts that he lost his war hero father and his mother is hospitalized with a brain tumor. When his mom, Emma (Shauna MacDonald), goes into a coma, he learns that it would take a miracle to save her and it would be a miracle if he won the prestigious 1954 BAA Marathon. This revelation makes Ralph a lad with a divine mission in “Saint Ralph.” Saint Ralph” is an old-fashioned, inspired story from the pen of former 1985 Detroit marathon winner, Michael McGowan, about a 14-year old boy that stands on the brink of becoming an orphan. Set in St. Michael’s Catholic school somewhere in Canada, Ralph is a loner, except for his best friend Chester (Michael Kanev), who eschews the rigid rules of the school and is constantly in trouble with headmaster, Father Fitzpatrick (Gordon Pinsent). The boy spends his time between paying for his indiscretions at school and spending time with his terminally ill mother. Ralph’s punishment for his latest infraction is his unwilling conscription onto the school’s track team under the guidance of Father George Hibbert (Campbell Scott). The teacher makes the statement that one of the team winning the BAA event would, indeed, be miraculous. Ralph sees this as chance to save Emma and decides that, with 180 training days left before the race, he will train to win the world’s most prestigious foot race. A miracle, it seems, is the only hope for Emma and Ralph forms a plan to create it. He only has to have the strength of faith, purity and prayer to get the needed miracle and winning the Boston marathon would fit that particular bill. This begins a wonderfully nostalgic story of faith, perseverance and plain old chutzpah as Ralph, unwaveringly, seeks his Holy Grail and his mother’s salvation and return to good health. The boy is hindered in his pursuit by the rigidly strict headmaster, Father Fitzpatrick, who sees Ralph as an incorrigible problem child. But, the lad’s steadfast dedication brings more liberal Father Hibbert around and the priest agrees to train Ralph. The cleric knows Ralph’s goal is impossible but he pushes him anyway because of the youngster’s unflagging will. As the months pass, Ralph’s running performance reaches unexpected heights and maybe, just maybe, there is a miracle in the making. Adam Butcher, as young Ralph, makes an auspicious debut on the big screen. Right from the opening frames, Ralph proves to be an intelligent, irreverent, likable and spunky kid who just can’t seem to keep out of trouble with his headmaster. When he visits his mother in the hospital he is invariably cheerful, downplaying the trouble he gets into at school. His revelation, and the look of bliss that comes over the boy, is palpable. Butcher does a marvelous job in creating a fully realized character (with a little help from writer/director McGowan). The handsome youngster is a pleasure to watch and convinces as a marathon runner. Campbell Scott does honest yeoman’s work as practical Father Hibbert, a man who sees the folly in Ralph’s decision but also sees the boy’s dedication to his particular cause. The priest sticks by Ralph even it may cause him to be transferred and Scott plays Hibbert with believability. Gordon Pinsent, as martinet-seeming Father Fitzpatrick, has the tough role of being an ogre to Ralph but the veteran actor give the man full dimension. Shauna MacDonald is quite angelic as Ralph’s terminally ill mom even though she is in a coma for most of the film. Tamara Hope plays well as Ralph’s budding romantic interest and friend, Claire. Jennifer Tilly is fine as Emma’s sympathetic nurse and the boy’s friend, Alice. The kids in the school come across as believable, too. McGowan’s script and the film’s production team do a credible job in creating the atmosphere of a conservative Catholic school circa 1954. The Church has taken a major hit on the morality side of things in recent years so it is almost nostalgic for me, remembering the priests of my young Roman Catholic days as dedicated, honest and strict believers in their faith. The production techs give the film the look and feel of the early 1950’s period. There is also a clever chapter transition that uses the feasts of the saints to mark the passing months leading to the big race. This climax event, too, is handled well and believably. There once was a day when the BAA marathon runners numbered in the hundreds, rather than 10000, and the filmmakers show it with proper scope and, even then, excitement. Saint Ralph” is the kind of movie that makes you see why people can believe in miracles. Here’s hoping that folks who like movies, really like movies, make the time and take the effort to see this little gem.