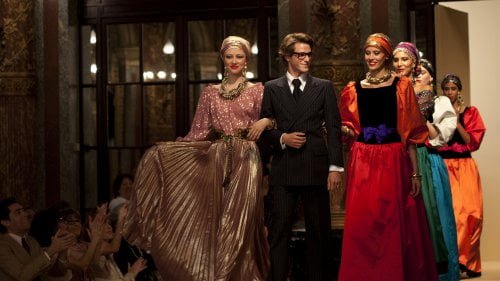 From 1967 to 1976, a bomb went off in the world of fashion, upending it as much as the political events of the day changed society. The man who lit the fuse was "Saint Laurent."

In 2014, two French filmmakers both embarked on films about the same man. Jalil Lespert won the race with a standard biopic that accentuated the relationship between Saint Laurent and his business partner lover Pierre Bergé. Cowriter (with Thomas Bidegain, "A Prophet")/composer/director Bertrand Bonello ("House of Pleasures") has chosen a different route, one which doesn't feed information but creates emotional impressions, moments in time, getting us into Saint Laurent's (Gaspard Ulliel, "Hannibal Rising's" Lecter) head from the outside in. It's a deeper, more emotionally satisfying film. Bonello even starts his film with the back of Saint Laurent's head as he's being interviewed, a bold move, before jumping back to 1967 during some quiet tension in the YSL atelier, then to 1968 in the club when Yves spots muse Betty Catroux (Aymeline Valade) and literally sees himself. A split screen contrasts world events of 1968 and 1970 with runway picks from Saint Laurent's collections. A fan letter from Andy Warhol noting his Mondrian dress proclaims them the two most important artists of their day. Bonello's setting off flashbulbs yet resisting that hoary device. Jumping ahead to 1973, we settle in for a long business meeting as Pierre Bergé (Jérémie Renier, "L'Enfant") negotiates with his American counterpart on the YSL brand, the scene establishing Bergé's business acumen, the myriad levels of details his partner must contend with and the moment when a fashion designer 'took to the streets,' launching ready-to-wear alongside couture while blessing other products with his initials. When he names one of his perfumes Opium, the pharmacological conglomerate which owns his American rights is not amused. While Lespert's "Yves Saint Laurent" portrayed Jacques de Bascher as the designer's most noteworthy affair during his long time relationship with Pierre, Bonello makes this attraction far more prominent, de Bascher (Louis Garrel, "Jealousy") a dangerous obsession, Pierre the care taker who picked up the pieces. At work, people like studio director Anne-Marie Munoz (Amira Casar, "Anatomy of Hell") turn her boss's sketches into reality, styled by Loulou de la Falaise (Léa Seydoux, "Blue Is the Warmest Color"), but while Munoz is all business, de la Falaise is also a friend and muse, partying with him in clubs and his home in Marrakech. We're also given insight into Saint Laurent's obsessive collecting, his home designed to present his objects, his great gold Buddha set amidst his cameos in a red shadow box room possible partial inspiration for his predilection towards the 1940's and Far East in his own work. Pierre's gift of a painting of Proust's bedroom is used by the filmmaker as a springboard towards Saint Laurent's Ballet Russes collection. The designer's fragility (an Algerian War breakdown, drugs and alcohol) is brought to fruition by Helmut Berger's ("The Damned") take on the designer in '89, an addled yet exacting man cocooned amidst the things he's gathered so very specifically over decades, including a long line of French bulldogs named Moujik (the first having died after ingesting drugs while Saint Laurent and de Bascher were passed out). He lives alone, Bergé unable to cohabitate after a murder attempt, yet still his partner. Ulliel captures the essence of the shy, self-destructive artist, aided by the signature black framed glasses and mop of luxurious locks. Renier will be a surprise for those used to seeing him as working class characters in the Dardennes' films, a conservative businessman in appearance, assertive and forward thinking at work, desperate to both please and tame his lover. Garrel is so right for the hedonistic Jacques if feels like typecasting. And yet the one performance in the film which is a real knockout comes from Valeria Bruni Tedeschi ("Human Capital") in one scene as a client, Mme Duzer, unsure at first in a Saint Laurent pant suit, transforming before our eyes as small adjustments are made. (Saint Laurent's most famous client and friend, Catherine Deneuve, is not represented in the film; his influential mother (Dominique Sanda, "The Conformist") is seen briefly) The film's shifting timeline flows beautifully (editing by Fabrice Rouaud) with musical selections ranging from the Velvet Underground to harpsichord and opera. Costume Design by Anaïs Romand recreates what made Saint Laurent great. The film climaxes with that stunning Ballet Russes show, shown in a screen split callback to that Mondrian dress Bonello's never shown. Grade: