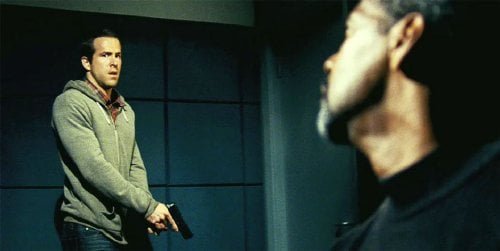 When traitorous rogue CIA operative Tobin Frost (Denzel Washington) gets the most explosive secret data file of his life, he immediately becomes a deadly target. With several snipers and ground shooters too close for comfort in downtown Cape Town, Frost seeks asylum in a handy U.S. Consulate building where his presence is immediately reported to Langley. Young bored recruit Matt Weston (Ryan Reynolds, "The Green Lantern") has been looking for a transfer but he's about to get more action than he ever dreamed of when Frost is transported to his "Safe House."

Sporting an eclectic cast, a script hot off the 'Black List' (a guide to the best unproduced screenplays) and the English language debut of Swedish director Daniel Espinosa, "Safe House" may not be the most original movie but it's an above average production with interesting locations, realistic violence and a couple of twists and turns along the way. It's the popcorn equivalent to "Tinker Tailor Soldier Spy," but it's made with real butter. We're introduced first to Matt, living a seemingly ideal life with stunning girlfriend Ana (Nora Arnezeder, "Paris 36"), but work, which he must keep secret from her, consists of hanging out all day in a multi-room underground bunker. A call to his boss David Barlow (Brendan Gleeson, "The Guard") back in D.C. reveals that he's itching for a post in Paris or Rome after 12 uneventful months, but that he doesn't have seniority. Next we witness Tobin meeting in a dark bar with MI6's Alec Wade (Liam Cunningham, "The Guard"). He enters the men's room to inject the passed microchip into his body, but before he has left the stall an assassin has come to find him. Wade denies any knowledge but is caught in the crossfire during a hair-raising car chase. Back at Langley, a C.I.A headquarters control room under the command of Harlan Whitford (Sam Shepard, "Fair Game," "Blackthorn") goes into overdrive when Tobin surfaces, with Barlow rooting for his rookie while his colleague, Catherine Linklater (Vera Farmiga, "Source Code"), expresses doubt. When a team led by Daniel Kiefer (Robert Patrick, "Terminator 2: Judgement Day") arrives with the subject, Matt no sooner recognizes his notorious 'guest' than his Safe House is compromised, his entire backup team taken out by the same heavily armed mercenaries last seen gunning for Frost. Matt's desire to become a field operative is unexpectedly thrust into his lap as he must take his prisoner and run. Writer David Guggenheim has crafted a nice cat and mouse game with character details and an unknown, hostile environment. Before Tobin begins toying with Matt, who becomes a protege and adversary all in one, we've learned back at Langley that the man rose to the top of his field because of his mastery of psychological manipulation. The fact that we know what he's up to when he tries to make Matt reconsider his circumstances makes us predisposed to think of him as a corrupting influence as his nemesis is obviously one of the good guys and that might be right or wrong or a little of both. Washington's a lot of fun in this role and Reynolds acquits himself well enough, particularly as a believable punching bag (like the Bourne movies, every blow, kick and cut can be felt). Espinosa knows how to stage action, with two terrific Cape Town chase scenes followed by Tobin slipping away from Matt at a soccer stadium by pulling in local police, an attack in the Apartheid era shantytown of Langa and some final hand-to-hand combat in a remote farmhouse. But the film does fall down a bit in its last third. Whitford's dispatch of Barlow and Linklater to South Africa seems like overkill and Gleeson and Farmiga could almost be interchangeable (more unexpected are Rubén Blades' forgery expert and 'The Killing's' Joel Kinnaman, a seeming last act reset of Matt). Matt's last official (implied) act is straight out of "Green Zone" without any of the shades of gray demanded by the film's penultimate scene. And overall, cinematography by the "Bourne" series' Oliver Wood, that grainy kinetic docudrama style, has become a genre cliche. Still, despite genre familiarity, "Safe House" offers sprinklings of the unforeseen and its cynical depiction of rot from within is a reflection of our times.