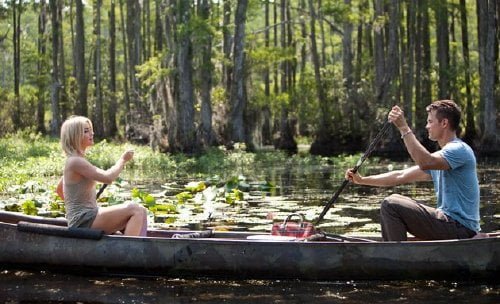 Katie Feldman (Julianne Hough, "Rock of Ages") flees her home in a panic, evading the tailing policeman who's followed her to the bus terminal. When her Atlanta-bound bus stops in the small coastal town of Southport, North Carolina, she decides to stay, sensing that this place just might be her "Safe Haven."

It's a mystery why Swedish director Lasse Hallström ("Dear John," " Salmon Fishing in the Yemen") has become caught up in the Nicholas Sparks' sausage factory. Unless a filmmaker is able to throw out the Sparks signposts - dilapidated houses needing renovation, cancer, romantic canoe rides, Southeast coast beach towns, important letters, imperiled children, bullying cops, soaking rainstorms - one cannot expect to co-opt that above the name title. This is a Sparks movie through and through and if Sparks can't be bothered to write a new story, I seriously do not know why I must write a new review. (Just look at the picture above - could be lifted right out of "The Notebook.") OK, there are a couple of reasons. Sparks has gone a little more cuckoo with this one, which plays like "Sleeping with the Enemy" crossed with "The Sixth Sense." Sometimes his films' stars can raise it up a notch and I'll be damned but Julianne Hough and Josh Duhamel ("Transformers"), not exactly Hollywood's biggest names (or talents), create a rooting interest with their nicey nice, small town courtship, even if Duhamel can't make the 'big romantic obstacle' moment work. Newcomer Mimi Kirkland has a career (if she wants one) after her natural and charming performance here as Lexie, Alex's precocious daughter. She upstages pro child actor Noah Lomax ("Playing for Keeps") as her older brother Josh, the one who has to be won over to the new woman in dad's life. But make no mistake, those things only make a bad film bearable. The way the script and film are structured, we aren't supposed to know who the guy tailing Katie is. There are two problems with this. First, some of the things this cop does makes no sense - like canvassing a neighborhood with a picture when he presumably has no idea where she's gone - unless you know exactly who he is anyway. Which is the second problem. The character (David Lyons, "Eat Pray Love," TV's 'Revolution') is also a cardboard villain, a raging monster. Then there is the utter unreality of Sparks-world, where a stranger wanders into a restaurant, immediately procures a job and can suddenly afford to rent a place and buy things to spruce it up (why, that's just what Zac Efron did in "The Lucky One!"). A nosy neighbor, Jo (Cobie Smulders, TV's 'How I Met Your Mother'), is awkwardly shoehorned into the film, sticking out like a sore thumb. Sparks also throws in two saintly seniors, Mrs. Feldman (Irene Ziegler, "Nights in Rodanthe"), a protector, and Alex's Uncle Roger (Red West, "Goodbye Solo"), the twinkly sidekick who doesn't do anything. There's obviously an audience for these things and they'll get exactly what they're looking for with "Safe Haven" - plus an attempt at some added frissons which only prove that Sparks should stick to what he knows best.