Sad Vacation: The Last Days of Sid and Nancy 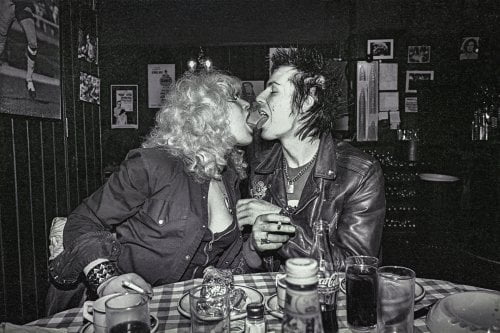 After the breakup of the Sex Pistols early in 1978, bassist Sid Vicious took his controversial American girlfriend Nancy Spungen to New York, moving into the infamous Chelsea Hotel. It turned out to be a "Sad Vacation: The Last Days of Sid and Nancy."

Cowriter (with Brett Dunford)/director Danny Garcia's ("The Rise and Fall of The Clash") look at the last days of Sid and Nancy is a search for the truth behind the death of Nancy Spungen, but this is mostly a rehash, a collection of facts and theories for the uninitiated. What is fresh about it is Garcia's wide range of interview subjects, especially those who lived in and around the Chelsea on the fateful evening of October 11, 1978, whose various insights and anecdotes add flavor to a well known tale. These include neighbor Neon Leon, who served Sid and Nancy beef burgundy with broccoli on their last night together, rocker Sylvain Sylvain, who sniffed Sid's ashes, The Heartbreakers' Walter Lure, photographer Bob Gruen and one woman brave enough to call herself a friend of Nancy's. As Sid is remembered as charming, witty and an all around sweetheart, Nancy is described as obnoxious, abrasive, whiny and vampiric. Yet all agree the relationship was real. But as Nancy's ambitions were thwarted by the couple's addictions, trouble began to brew. Their fights were heard daily. The documentary charts the events of Nancy's death comparing timelines and various witness accounts. Gino Riccardo reports that Sid told him 'Nancy wants me to kill myself,' but that while he was playing along with 'her game,' he was getting fed up. Alternative killers are proposed, most notably drug dealer Rockets Redglare whom actor Ned Van Sant witnessed later with a wad of money he recognized as Nancy's, but no new compelling evidence is revealed. More interesting are the forensics, Nancy's one one inch stab wound a highly unlikely murder attempt. The film wraps going over the final months of Sid's life and its aftermath, Sid's mother and a motley crew traveling to New Jersey to spread his ashes on Nancy's grave. Perhaps the biggest takeaway is that both Sid and Nancy were given drugs by their own mothers (Nancy Phenobarbital as a child with behavioral issues, Sid his final heroin dose) and that "Sid and Nancy" director Alex Cox got it right. Grade: