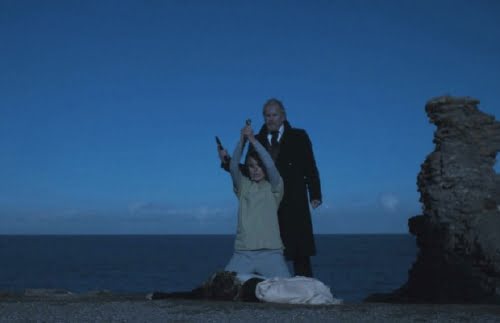 After suffering several miscarriages, Dr. Tora Hamilton (Radha Mitchell) is thrilled when her Scottish father-in-law Richard Guthrie (David Robb, TV's 'Downton Abbey') arranges an adoption with his institute on Shetland Island. But when she discovers a woman's body carved with runes and its heart ripped out buried there, he and other locals are quick to dismiss her research pointing towards ritualistic "Sacrifice."

Writer/director Peter A. Dowling's ("Flightplan" screenplay, "Stag Night") adaptation of the Sharon Bolton novel is the equivalent of a beach read, a pulpy thriller that begins hitting the standard beats (foreigner among suspicious locals, remote maternity hospital on craggy isle, the pointedly locked door) within its first five minutes. The film's opening, American set scene is actually its most horrific, but there are still moments to be had on Shetland where events recall 'The Stepford Wives' crossed with 'The Wicker Man." Although she is newly employed at the local hospital whose morgue holds her discovery, Tora is denied forensics investigation, even after she points out what others have apparently missed - the dead woman had recently given birth. Her new colleagues all believe that the body is over a hundred years old, preserved by the peat in which it was found. But Tora, who notes that a widowed physician's adopted son looks just like him, keeps investigating, bringing her findings to Sgt. Dana Tulloch (Joanne Crawford, excellent). Just when the two fall upon a historical pattern which supports their theories, Tulloch is run off the road in a fiery crash. And why has Tora's husband Duncan (Rupert Graves, TV's 'The Family') lied about meeting with The Shetland Rite? "Sacrifice" features lots of sneaking about in locked hospital basements and family manses, giving Mitchell little to do but amateur sleuthing. A supernatural element is raised with the local rummy's ramblings about The Trows, evil mythical fairies, but the while the answer to the mystery is age old, it's rooted in human malevolence. There is one pretty laughable moment just when things should be at a fever pitch (a secret, locked room filled with burning candles), a climactic event requires an unexplained time jump and the synth score is cheesy. Shetland locations are impressive, however, providing a wild, gothic atmosphere. Grade: