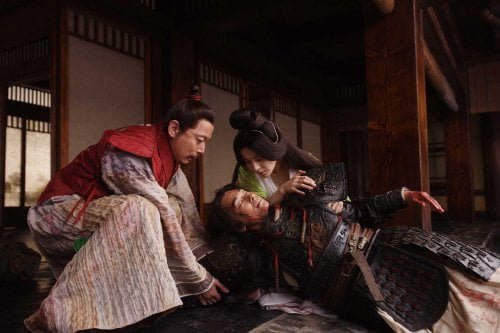 An unscrupulous general, Tu’an Gu (Xuegi Wang), seizes power from the emperor and destroys the entire Zhao clan, a powerful family some 300 in number. He learns that a male child born into the Zhao family is alive and orders all boy babies be collected to find and kill the last remaining Zhao. A village doctor, Cheng Ying (You Ge), secrets the Zhao infant away but must give up his own wife and child as a “Sacrifice.”

In the 5th Century B.C., General Tu'an Gu (Xueqi Wang, Kaige's "Yellow Earth") is jealous of the favor shown the younger General Zhao Shuo (Zhao Vincent) who is wed to the King's (Chen Arthur) sister and imminently expecting the King's nephew. In an elaborate bit of trickery, Tu'an assassinates the King in a way that lands all suspicion with the Zhao family and then uses this lie to massacre them. But a doctor, Cheng Ying (You Ge, "Farewell My Concubine"), aided by soldier Han Jue (Xiaoming Huang), hides the newborn Zhao Wu in a desperate plot that causes him to make the ultimate "Sacrifice." Writer/director Kaige Chen ("Farewell My Concubine," "Together") reaches back in time to tell another story of a child's relation to his father as well as his place in history. Featuring a grounding performance from You as the adoptive parent, "Sacrifice" is at once both epic and intimate. The film's set up is dense with characters and intrigue. After the arrival of the stunning and very pregnant Lady Zhuang Ji (Bingbing Fan), we see Tu'an being swayed by a villainous adviser who also creates poisons carried by insects (demo'ed to Tu'an on a poor white bunny) and trains dogs to kill. Once Tu'an has dispatched the mirthful King, he turns his attentions to the King's nephew, just born to Lady Zhuang by the side of her dead husband, assisted by Cheng. Tu'an's soldier Han Jue discovers the child (with much tossing of said infant in a basket, Kaige displaying some John Woo style black humor) but is moved by Lady Zhuang, who kills herself with a pillow tied underneath her kimono to fool Tu'an. Cheng brings the child, nicknamed Bo'er, to his wife (Qing Hai) who his nursing their own newborn, but when soldiers arrive, she gives them the Zhao child. Tu'an has ordered that all 100 of the fortress's infants be gathered reasoning that whoever is hiding Zhao will not, allowing him to identify the child. Cheng's wife and their own son are hidden by Gongsun Chujiu (Feng-Yi Zhang, "Farewell My Concubine," "Red Cliff"), whom Cheng betrays to Tu'an believing that the man fled. After witnessing the slaughter of his own wife and child, Cheng delivers Bo'er, who Tu'an believes to be the doctor's baby, into the palace as the godchild of his enemy. Keep your friends close, but your enemies closer. The opening of the film is at once the most action-packed and exciting and the most problematic. Kaige demands rigorous attention to follow all the players as he cuts backwards and forwards in a choppy fashion that plays like the film was cut for time. Once settled, this frantic style is abandoned for the most part, although Kaige often overkills with momentary flashes to what we have seen before, not trusting an audience which might have needed help earlier. The film follows the growth of Bo'er from crawling infant to the 8 year-old who prefers Tu'an's indulgence over Cheng's discipline to the 15 year-old finally entrusted with the truth from the man he knows as Uncle Scarface, Han Jue disfigured by Tu'an's sword from the fateful day of Bo'er's birth. Even though his pace gets more leisurely, Kaige maintains suspense with character. Bo'er is essentially raised by two patriarchal figures, Tu'an offering swordplay and a soldier's destiny, Cheng offering safety and a more normal life, Lady Zhuang's request. Bo'er is distrustful of Han Jue, who meets with his father in secret. But as the boy ages, Tu'an cannot help but notice that Bo'er reminds him of someone. The story is told artfully, vengeance never a foregone conclusion. Kaige stages some memorable scenes. Bo'er's grandfather, Grand chancellor Zhao Dun (Guo'an Bao), tries to escape Tu'an in a chariot with a faithful warrior holding up the side that's lost its wheel but they ride into a trap and all plummet to their deaths. A Chinese banner is used by Cheng to record Bo'er's true story and Kaige uses black white and red animation to visualize Cheng's painted characters. Cheng treats Bo'er to his favorite food in a wooden noodle house, long strands of pasta hanging from the rafters. Tu'an takes the young boy out into the country where they lie in a field of flowers, an almost shocking counterpoint to Tu'an's character. Sparingly used, snow has a startling effect. A late battle scene gives us Bo'er's introduction as a warrior and an on-the-fence Tu'an as a most formidable one. But despite Bo'er's central importance, "Sacrifice" belongs to the character who made it and You Ge, who ages and is aged well, always keeps sympathy with the kind and honorable Cheng. Kaige again goes overboard at film's end, this time tipping into sentimentality, but You makes it deserved.

Chen Kaige specializes in epic historical dramas of his birthplace, China, with such lush dramas as “The Emperor and the Assassin” and “Farewell My Concubine.” He continues this specialty with “Sacrifice,” set during the Spring and Autumn period of ancient China (about 700-450 BC), as he focuses on the doctor, the general and the lone survivor of the Zhao family, named Bo. Cheng, while raising Bo as his own son, has dreamed of revenge against the man who murdered his wife and son. Over the years, he insinuated himself and Bo into Tu’an’s retinue, carefully cultivating the general to become fond of Bo. As the years pass, Cheng keeps his secret from the boy but the general notices the similar looks of teen age Bo and Tu’an’s former nemesis, the boy’s real father. The plot thickens as the boy approaches manhood and is trained in the art of war, a tool that Cheng will use to fulfill his vow of vengeance. This is mainly a three-hander as important characters, such as Bo’s father and mother (played by Vincent Zhau and Bingbing Fan), are dispatched early on. You Ge, a man of tremendous patience in getting his revenge on Tu’an, is outstanding as the quiet, stoic doctor. Xueqi Wand, as the general, is haughty in character and the actor gives depth to Tu’an, both good side and bad. Techs are terrific, from costume to cinematography, giving the film a lovely look. My only complaint is that “Sacrifice” feels like it was heavily edited for western audience, making the story choppy.