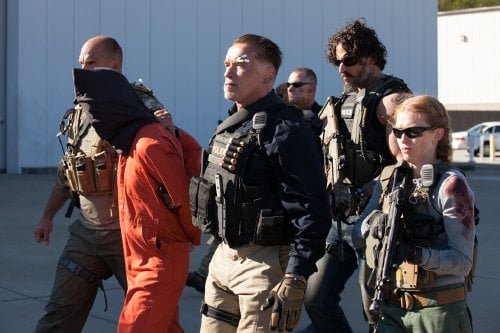 After a successful raid on a Mexican drug cartel safe house, The 10 million they skimmed for themselves disappears, members of Breacher Wharton's (Arnold Schwarzenegger) DEA task force start dying and those still left suspect "Sabotage."

After his sympathetic portrayal of LAPD cops up against a vicious Mexican cartel in "End of Watch," cowriter (with Skip Woods ("A Good Day to Die Hard")/director David Ayer returns to his love of the sociopathic lawmen he wrote in "Training Day" and "Harsh Times." But in "Sabotage," a vehicle that presents Schwarzenegger as a vengeful, cigar chomping cowboy, he's gone so over the top he's made an R-rated cartoon, one in which he's turned 'The Killing's' Mireille Enos into a rabid, man eating and beating glassy eyed junkie with pupils the size of manhole covers. Ayer shows his hand before his title credit, beginning with grainy video of a woman being tortured to death, followed by hands drenched in blood being washed in a bucket. If this tips you off that this is going to be a piece of violent, gore-filled exploitation, you'd be right. "End of Watch" used brutality to force us to look at what the cops were up against whereas "Sabotage" does it just for kicks. There's also a problem with logistics, a cross cut dual fakeout scene right out of "The Silence of the Lambs" not making too much sense after the fact (unless we make a number of suppositions ourselves - a flashback reveal could have gone a long way). At least the writers don't rely on red herrings, as it's obvious from the get go just who the wild card is. Breacher and his team go under internal investigation after the Feds note the missing money, but the man's reputational reach gets it swept under the rug. And so, one man down, they reform. In addition to Lizzy, there's her husband, James 'Monster' Murray (Sam Worthington, "Avatar," giving the film's best performance(!)), newbie Joe 'Grinder' Phillips (Joe Manganiello, HBO's 'True Blood'), quiet Julius 'Sugar' Edmonds (Terrence Howard, "Lee Daniels' The Butler"), Tom 'Pyro' Roberts (Max Martini, "Captain Phillips") and Eddie 'Neck' Jordan (Josh Holloway, TV's 'Lost'). Bryce 'Tripod' McNeely (Kevin Vance, "End of Watch") decides to go off the grid. When Pyro's RV is smashed into by a train (it having been parked across the tracks), Homicide detective Caroline (Olivia Williams, "Rushmore," slumming) and her partner Jackson (Harold Perrineau, "Snitch," "The Best Man Holiday," the film's comic relief) get added to the mix but she finds herself being stymied by the team, an overnight with Breacher proving his means of distraction. When the next member's found gutted and nailed to his ceiling, distrust begins to build and Breacher decides to go warn Tripod. He's too late. Ayer revels in blood and gore (Pyro's found all over the place) when he's not indulging a weird focus on pee/toilet jokes. More egregious still, the answers to the crimes provide no satisfaction and little sense. Dialogue is over ludicrous (pity poor Manganiello, who can't supply conviction to the film's worst line). "Sabotage" is a wise-cracking bloodbath for no other reason than the desire to turn a profit.