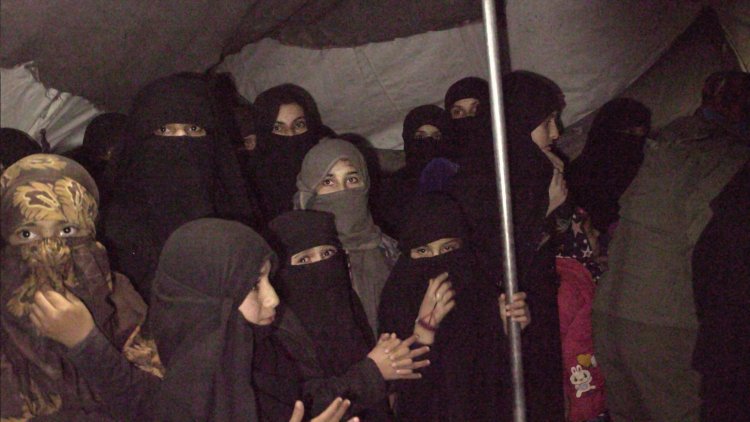 In the northwest of Syria, thousands of Kurdish Yazidi women and girls who were kidnapped from Iraq’s Sinjar province by ISIS are being held in the dangerous Al-Hoc Camp.  Nearby, Mahmud mans his phone constantly, fielding requests from families to rescue their wives, sisters and daughters.  Assisted by Ziyad, the head of the Yazidi Home Center who will drive into and out of the camp, often while being followed, and brave Yazidi women willing to infiltrate under cover, Mahmud toils endlessly to recover the women used as sex slaves their captors call “Sabaya.”

A Kurd from northern Iraq now resettled in Sweden, director, editor and cinematographer Hogir Hirori’s vested interest in his subject comes through in his filmmaking with both compassion and such invisible access his audience feels part of Mahmud’s missions.  The drives captured through the vehicle’s front and rear windows, sometimes settling on its occupants, may recall the work of Iran’s late Abbas Kiarostami with his predilection for shooting in cars but there is a palpable tension in Hirori’s rhythms (the filmmaker won the Best Director award for World Documentary at 2021’s Sundance Film Festival).

There is tension of a different kind at Mahmud’s home, where his wife Siham chides him for never being there and his youngest little boy, Shadi, constantly demands attention.  But his sprawling, low rectangular home sheathed in large brown and mustard rectangular tiles, takes on a different air when we witness the first rescue, Leila, recovering there.  The young woman who saw all the men in her village slaughtered had been held for five years.  She hates the black she has been covered in, Siham and Mahmud’s mother Zahra giving her a patterned tunic and pink scarf.  Leila cannot stop weeping though and Zahra tries to comfort her, telling her there is no longer any need to cry.  While we appreciate the older woman’s kindness it is shocking to think of the mental health issues resulting from this treatment requiring professional help that is simply not available.  Kindness is a balm though and eventually we witness Leila smiling.  (We’ll also see Siham, once again, telling Mahmud she wishes he’d just ‘stay home for a day.’ ‘Mmmm,’ he replies distractedly, engrossed in his phone, and we will smile too now that we’ve experienced more of this family’s dynamics.)

After witnessing Mahmud’s poster boards covered in photographs of women and girls, we’ll see five women brought into the camp to ferret out Yazidi under cover, amazed at their bravery.  One of them, her teeth destroyed, reports having been ‘married,’ traded and sold to over fifteen men, one of whom put a hole in her head.  Is it one of them who captures footage inside the camp, a black veil fluttering in front of the lens?  On the flip side, it is devastating to watch women complicit in the Yazidis’ capture, lying in order to keep them hidden.  We will see a Yazidi village burning to the ground on the horizon.  Mahmud shows incredible restraint questioning a captive ISIS fighter trying to trace a woman, the cowed man who forcibly married her only knowing she was a Kurd.  And if, like me, you develop a sick feeling in the pit of your stomach while watching all this, the last rescue effort we witness is for Mitra, a seven year-old who cannot even speak her native tongue, having been taken at the age of one.  We are left to imagine what else has been stolen from her.

And then the hammer drops, news of attacking Turks coming through on the permission of the U.S.’s 45th administration.  With “Sabaya,” Hirori illustrates news items many have become inured to and brings them to devastating life while his subjects, Mahmud and Ziyad, give us hope for humanity.

When ISIS devastated Syria and slaughtered its people in 2014, one group, the Yazidis, especially the women, were targeted and trafficked for sex and slavery. The term used for these helpless and abused captive women, some 6000 and more, is a synonym for slavery: “Sabaya.”

Warning: be prepared to have your gut wrenched in this moving documentary about the ongoing rescue mission by Yazidis to find and bring back to their families those held as slaves by the “brave” ISIS invaders.

Swedish documentary filmmaker Hogir Hirori leads a clandestine team in an equally clandestine operation, led by a group of Yazidis rescuers, both men and women, to infiltrate the notorious Al-Hol prison in northern Syria, where 75000 ISIS fighters are being held by Kurdish guards. Within that camp are many Yazidis women, the Sabaya, who are still being trafficked by ISIS to raise money. The mission is to reunite every Sabaya with her family, even if it is just one at a time.

The rescue efforts, unlike how they work in fiction, are often met with failure and the “infiltrators” must put each failed mission behind them and move on to the next. The bravery and heroism of these rescuers is put on display as one, the focus of the harrowing story, “Mahmud” (names changed to protect them all), represents each and every infiltrator and their dedication to the mission.

It is probably just as well that “Sabaya” runs an efficient 90 minutes. This hauntingly true modern tale of rescue keeps such a tension level, through the failures and successes of each mission, longer would be even more wrenching to the viewer, like me. Keep in mind; many of these rescued women voluntarily go back into Al-Hol to save others. Talk about intestinal fortitude.

"Sabaya" opened in limited release on 7/30/21.  It will be featured at Cambridge's Brattle Theater beginning on 8/6 - click here for theatrical info and here for virtual.