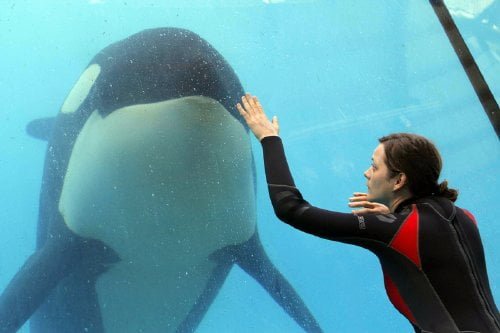 Ali (Matthias Schoenaerts, "Bullhead"), a former boxer and kick fighter, is homeless, keeping alive and feeding his 5 year-old son Sam (Armand Verdure) by shoplifting and finding food left on passenger trains. But when he arrives in Antibes at the home of his grocery clerk sister Anna (Corinne Masiero), things begin to turn around, beginning with a new job as a bouncer at a nightclub. There he meets Stéphanie (Marion Cotillard, "The Dark Knight Rises"), a rather aloof orca trainer from Marineworld, whose later radical change in circumstance proves his redemption in "Rust and Bone."

Cowriter (with his "A Prophet" collaborator Thomas Bidegain)/director Jacques Audiard continues his fascination with men who operate in the shady ends of society and the handicapped women who help pull them back from the brink. Adapting two of the short stories from Canadian author Craig Davidson's collection, Audiard turned the central character in one from a man to a woman and wedded them together into an offbeat romance. The film is drawing fire from animal rights groups for its use of Marineland and its enclosed orcas, but the writer/director both makes the danger to humans clear as well as the some of the underlying causes of the animals' agitation. If only we understood how Cotillard's character felt about them. Ali insists on driving Stéphanie home from the club after breaking up a fight she was involved in. She reluctantly lets him into the apartment she shares with her boyfriend to ice his hand and he leaves her his number when he departs. She's been pretty dismissive of him, so just why does she call him after the horrific on the job accident (portrayed in a bit of a muddle) that costs her her legs? (She has a dedicated female friend, Louise (Céline Sallette, "Room of Death"), at her side who gets her through a suicide attempt so it's not as if she's alone.) Ali knows all about it because of media attention, and comes right over. He makes no fuss out of her condition, even getting her to finally not only go outside, but expose her stumps for a dip in the ocean. Although the genesis of this relationship is a bit of a head scratcher, once it begins it's compelling. Ali grabs an opportunity to get back into boxing - in the underground market - and after some initial resistance, Stéphanie supports him, perhaps even getting turned on by it. When Ali asks her about her sexual health, he matter-of-factly suggests sleeping together and that dimension is added to the friendship. After Ali wins what appeared to be an impossible fight, the group celebrates, but Stéphanie is astonished to watch him leave with a blonde after she fails to follow him onto the dance floor. But just as she's gotten him to understand the rules of an adult relationship, the consequences of another of his illegal activities cause him to flee. While Stéphanie is all about her handicap and her tie to the childlike boxer, Ali has a son to contend with and his behavior is irresponsible. As Audiard uses orcas to define Stéphanie, he attempts to use dogs to define father and son and the device is heavy handed, just as his symbolic pairing of two underwater scenes to parallel Stéphanie and Sam makes little sense (he's actually paired Sam with the orca). But despite these bumps, Audiard succeeds in pulling his strands back together for a satisfactory conclusion. Schoenaerts is physically imposing and that, combined with the simplistic outlook he gives Ali is all the character needs to come across as a not bad guy who just might unintentionally hurt you. He is also able to use violence as a means of expressing emotion. Audiard makes his actor's underplaying work. Cotillard, on the other hand, is more than a bit of a cypher here. We never understand what drives her career (a return visit to the orca tank is a visual stunner, but is that empathy or loss or looking for an answer from the actress?) nor what draws her to a bouncer she barely gave the time of day to, although his later acceptance of her different form is a clear motivator and playing field leveler. The actress is quite good physically relaying her handicap. Special effects are seamless and odd to see in a foreign language relationship drama. The film, which was shot in the South of France and Belgium by cinematographer Stéphane Fontaine ("A Prophet"), is a study in contrasts, golden beaches, artificially blue pools, gritty lots and frozen lakes.

Ali van Versch (Matthias Schoenaerts) left Belgium to find a home for him and his young son, Sam (Armand Verdure), in Antibes on France’s southeastern coast. As they struggle to survive, Ali meets a pretty orca trainer, Stephanie (Marion Cotillard). A terrible accident involving one of her killer whale during a show ends in tragedy and the loss of both her legs. Ali learns of the accident and comes forth and, at first, provides physical assistance for Stephanie but soon aids her emotionally, too, in “Rust and Bone.” What this film has going for it is the notable chemistry between stars Cotillard and Shoenaerts. That, and the still-amazing-to-me ability to make on-screen amputation look real. I know that CGI makes anything possible, but things like Lieutenant Dan (Gary Sinise, “Forrest Gump”) and Stephanie having no legs is more than just CGI. The actors, in both cases, give physically convincing performances. Matthias Schoenaerts, who gave a terrific, frightening perf in last year’s steroid-driven “Bullhead,” is a volcano of emotion under the skin and, though from two completely different worlds, his Ali and Stephanie developing relationship, from friends to lovers to mates for life, flows sentimentally. This multilayered character, Ali, is also a budding street fighter and uses his fists to earn the money to take care of his son. And, as Stephanie gets mobile through the use of modern prosthetics she becomes, more and more, an intimate part of Ali and Sam’s life, including Ali’s fight game – the only woman in the man-dominated sport. “Rust and Bone” is a different cut at a romantic drama as both characters deal with their own unique problems but find help, hope and love in each other. This is an actors’ film but director Jacques Audiard and co-scribe Thomas Bidegain (adapting a story by Craig Davidson) give them the words and guidance that lets Cotillard and Schoenaerts build, emotionally, an I-want-to-believe couple.