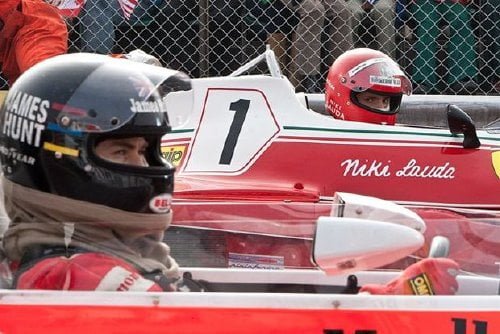 Back in the 1970's, two out of every twenty-five drivers who began the Formula 1 circuit would be killed every year. 1976 saw one of the greatest race driving rivalries the sport had ever seen, when Austrian upstart Niki Lauda (Daniel Brühl, "Good Bye Lenin!," "Inglourious Basterds") emerged the year before as world champion while England's ladies' man James Hunt (Chris Hemsworth, "Thor") fought for a new sponsor, finding one in the nick of time with McLaren. The two men couldn't have been more different in lifestyle and approach to their sport, but when they got onto a Grand Prix racetrack, they both felt a "Rush."

Director Ron Howard ("Frost/Nixon"), whose last film, "The Dilemma," was his worst, has rebounded with one of his best, perhaps not surprising for the man whose first feature was 1977's "Grand Theft Auto" for Roger Corman. Howard steps on the gas and never lets up the pace and yet he achieves two in depth character studies of the men who fuel his story (written by his "Frost/Nixon" collaborator Peter Morgan). 'We were just drivers busting each others' balls but people saw it differently,' says Hunt before the film retraces its steps to set things up. And here's James Hunt, living the high life, funded by Lord Alexander Hesketh (Christian McKay, "Me and Orson Welles"), whose racing team looks like a moveable party. Meanwhile, Lauder's wealthy father refuses to bankroll his ambitions and so he gets a loan and buys his way into a contract, then finagles his way into the lead driving spot by adjusting the car for increased speed. But the gears were always shifting between the two men and Lauda jumps to Ferrari just as Hunt's benefactor's money runs out. Hunt squeezes into the circuit at the last minute, nabbing a spot with McLaren, but his car is problematic and it seems like he'll never catch Lauda. Off the track, Hunt is legendary for his carousing. 'Women like race car drivers because they're close to death,' we hear over the soundtrack as we see him entering a clinic, badly beaten up over someone else's wife, but not hurt enough to stop from immediately bedding his nurse, Gemma (Natalie Dormer, "Captain America: The First Avenger"). In a bid to settle down, he impulsively marries model Suzy Miller (Olivia Wilde, "Drinking Buddies"), but setbacks turn him into a surly drunk and she runs into the arms of Richard Burton. Lauda meets Marlene Knaus (Alexandra Maria Lara, "Downfall," "Control") by begging a lift, and, in an amusing turn of events, the two are forced to hitch when her car breaks down. She only learns who he is when the two Italians who pick them up beg him to drive their car. Hunt may have the more outwardly fun lifestyle, but it is the serious Lauda who finds true happiness (on his honeymoon he worries that this will hurt his racing as he now has something to lose). Howard, cinematographer Anthony Dod Mantle ("Slumdog Millionaire") and editor Daniel P. Hanley ("Frost/Nixon") get us inside the races using extreme closeups - of a car's inner workings, a detail on its body, the intensely focused eye of a driver - alternating with Hunt or Lauda's helmeted POV and medium shots of the cars jockeying for position. The action is like a pure shot of adrenaline, but there is also blood and oil and smoke when disaster strikes (be warned, there are several grisly scenes, including the aftermath of a decapitation during a Watkins Glen qualifying run and Lauda's climatic, inferno of an accident. Lauda's subsequent burn treatments may be even worse). The drama is not only in the racing and romance, but in the maneuvers and politics at play in winning the championship. Lauda gets a Hunt win disqualified by noting a variance in his car width of less than an inch. Hunt overrules Lauda's move to stop the Nürburgring, Germany Grand Prix because of dangerous weather conditions and Lauda almost loses his life. His reentry only six weeks later makes the man nobody liked a heroic favorite and Hunt pounds a journalist who dares ask Lauda how his disfigured face has affected his marriage. Australian actor Hemsworth has an easy swagger and charm as Hunt, but he also proves his acting range with desperation and driving ambition. Transformed with a dental prosthetic and unappealingly waved hair, Brühl's Lauda, whom Hunt called 'the rat,' is blunt and always calculating risk vs. speed. The two trade barbs, but one can feel their distaste for one another slowly turn into respect, even admiration. Wilde captures the 70's jet set while Maria Lara runs deeper (she and Brühl create a loving bond with little in the way of overt affection). The huge supporting cast are too numerous to mention, but Stephen Mangan of Showtime's 'Episodes' is a standout as Alastair Caldwell, Hunt’s chief McLaren mechanic while Pierfrancesco Favino ("Angels & Demons," "World War Z") is the third most notable driver, Lauda's Swiss teammate Clay Regazzoni (we hear more about Mario Andretti than see him). There's a sensation while watching a great film I like to call 'movie rush,' a physical reaction that doesn't happen often. Before trailing off ever so slightly with wrap up narration, "Rush" delivers it in spades.