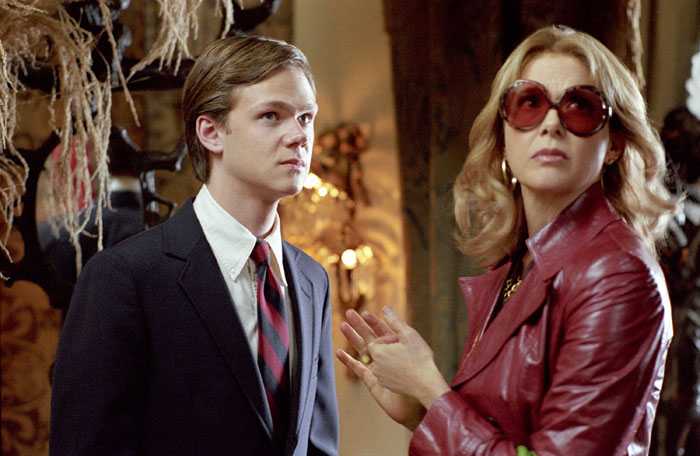 During the 1970’s, Augusten Burroughs (Joe Cross) grew up in a family that is the dictionary definition of dysfunctional. His father, Norman (Alec Baldwin), is an alcoholic and his mother, Deirdre (Annette Benning), is a stars-in-her-eyes, bipolar unpublished poet with aspirations to fame. When their marriage breaks up, Deirdre sends her teenage son to live with her shrink, Dr. Finch (Brian Cox), and his eccentric, and I mean eccentric, family. Augusten’s life becomes even more complicated as he learns how to survive in his strange, new world and not go “Running with Scissors.”

Eccentric” is the operative word for this quirking story based on the memoirs of Augusten Burroughs. Filmmaking newcomer Ryan Murphy adapts Burroughs’s chronicle of his bizarre young life as he leaves one dysfunctional home only to find himself in one that is even more discordant. Augusten is unceremoniously dropped, by his mother, on the doorstep of the Finch household and his new world is, in a word, cluttered. Really cluttered. I’m not talking a few extra knick-knacks strewn about. I’m talking about every spare square inch of space is piled high with books, dishes, uneaten food and things that can’t even be identified. But, it’s the denizens of chez Finch that are truly confusing to young, impressionable Burroughs. Dr. Finch is an unconventional psychiatrist, to say the least, with his unorthodox methods in treating Deirdre’s bipolarity. His wife, Agnes (Jill Clayburgh) lives in her own little world, oblivious to the mess around her as she watches TV and eats dog biscuits. Daddy’s girl, Hope (Gwyneth Paltrow), is an animal lover whose cat, Freud, talks to her. Second daughter Natalie (Evan Rachel Wood) is the most normal of the lot, though not all that normal as she convinces Augusten to let her “treat” him with her father’s old electro-shock machine. Rounding out the nutty Finch family is adopted son Neil Bookman (Joseph Fiennes) who writes bad poetry and hears voices. He also becomes impressionable Burroughs’s lover. Writer/helmer Ryan does an interesting, though uneven, job in bringing Augusten’s strange story to the screen. There is a surreal quality to his strange life where the word “normal” is not a part of the vocabulary. Annette Benning embraces her role as the deluded poetess who sees greatness in herself as she sends out reams of her work to any and all publications. Deirdre is thoroughly self-centered and sees nothing wrong with abandoning her son to the Finches. Newcomer Joe Cross plays his stranger in a strange land as an observer and occasional participant in the goings on at Finch manor. It’s the Finch family, though, that the word “strange” does not do justice. Brian Cox plays Dr. Finch with relish as he passes out words of wisdom and Valium to Deirdre to treat her condition. The best thing in Running with Scissors,” though, is Jill Clayburgh as Agnes. Her character seems to be just another psychotic in the family but, as the movie plays out, the actress gives real, sympathetic dimension to Agnes, as she ultimately becomes the mother that Augusten never really had. Evan Rachel Wood is fun as the ready-to-shock (figuratively and literally) Natalie. Joseph Fiennes is an odd duck as psychologically challenged Neil while Gwyneth Paltrow is merely weird as Hope. Credit needs to be given to production designer Richard Sherman who makes the Finch abode a unique and central character in the film. What really made me cringe was the sheer excess of clutter and refuse as the family lives, day in and out, in the disgusting mess without noticing anything odd. The rest of the techs are competent. I’ve set myself the task of reading Burroughs’s memoirs to see if Murphy and company does them justice. If so, then Augusten had to have one of the strangest adolescent lives I can think of. I can’t say that “Running with Scissors” is a likable film but it sure is a strange one.