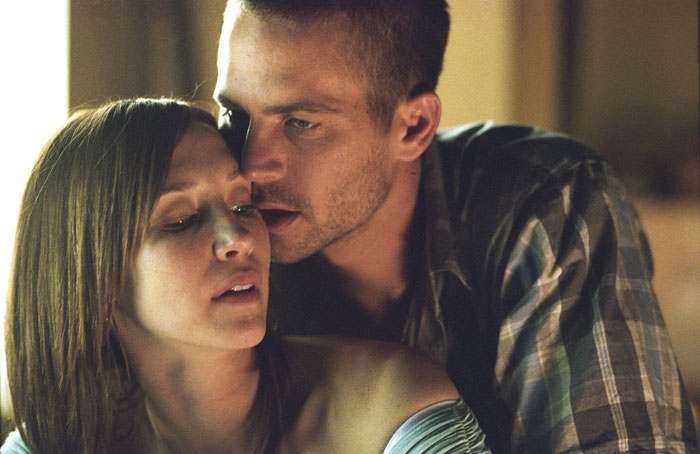 Joey Gazelle's (Paul Walker, "Eight Below") practice of hiding hot mob guns in his basement rather than properly disposing of them comes back to haunt him when his son's best friend Oleg Yugorsky (Cameron Bright, "Godsend," "Birth") steals one from a botched drug deal and shoots his abusive stepfather Anzor (Karel Roden, "15 Minutes," "Hellboy") with it. That man just happens to be the nephew of the psychotic Russian mob boss Joey's gang's in business with and to complicate matters, a crooked cop who survived the drug deal shootings may cross paths with that gun. Joey Gazelle is "Running Scared."

"Running Scared" is an over-the-top thrill ride that seems to have been cobbled from the stylistic excesses of Guy Ritchie, the flip violence of Tarantino and the story outline of Scorcese's "After Hours," but the seeds of writer/director Wayne Kramer's first film, "The Cooler," are all still here. There's the gimmicky hook - Macy's luck-draining ability in the first film, the MacGuffin gun and (very unevenly executed) fairy tale theme here. Both films are peopled with shady, violent characters and both heroes enjoy the love of a good woman. There's one major difference - you cannot take "Running Scared" at all seriously. If you do, you'll see a bad film. If you don't, it's a hoot. Except for a very bad and unnecessary final coda, Kramer's film covers about 20 hours in the life of a low level mob man and his reviled next door neighbor's son, both of whom we see bloodied and making a high speed escape in Joey's red vintage Mustang in the movie's first few minutes. "18 Hours Earlier" Joey's in a hotel room where a drug deal is busted into by masked men - mob boss son Tommy "Tombs" Perello (Johnny Messner, "Hostage," TV's "The OC") shoots and a blood bath ensues. When it's over, Joey realizes Tommy's shot a crooked cop, but none of them think they've left him alive. Afraid to be caught playing hockey in the family home's basement, Joey's son Nicky (Alex Neuberger) and his best friend Oleg hide just in time to see Joey add a gun to a stockpile behind a wall. That night at dinner, shots are fired next door with one bullet whizzing through the Gazelle's dining room. In a panic, Joey runs next door to discover his tweaked out neighbor Anzor lying shot in the shoulder and young Oleg gone. From this point on Joey and Oleg's paths crisscross throughout the night as each goes from one nightmarish extreme to the next. Their journey ends in a New Jersey hockey rink, echoing the film's beginning. Kramer's expecting a bit much of his audience with his fairy tale theme for Oleg, which is only evident in flashes, most notably in the Hans and Gretel like horror of being trapped in the apartment of Dez (Bruce Altman, "Matchstick Men") and Edele (Elizabeth Mitchell, "The Santa Clause 2"), two spectacularly sick pedophiles. That couple (wonderfully, eerily played) evoke "The 3 Bears" for no evident reason and another scene where Joey and Nick walk through a wooded area in search of Oleg might jog "Little Red Riding Hood" from its lighting and camera angle alone. But to think of Oleg as Pinocchio because he's not a 'real little boy' or to say his night is like falling through Alice's rabbit hole is fanciful, whether Kramer's town is called Grimley or not. Just where does Oleg's run in with a hooker (Idalis Deleon, "Woman Thou Art Loosed") and her murderous pimp (David Warshofsky, "Don't Say a Word") tie into this theme? And consistency is Kramer's biggest problem. His script may be tricky, but no sleight of hand can disguise the lack of logic that finds a diner employee knowing to steal a gun from a restroom toilet tank or even, for that matter, explains why Joey unwraps guns before he stashes them (the better for Nicky and Oleg to see them, my dear). The film's outrageously violent climax is severely hampered by the disappearing damage done to our hero's face and Nicky's frivolous request of his evidently dying dad. Still, these are the kind of goofy faults that one can have fun with and Kramer is obviously pushing the twisted black humor of his situations. Paul Walker is getting into more adult territory with this flick that finds him believably hard (and, no pun intended, horny), but "Running Scared" certainly gives him no character arc. Better is Farmiga ("The Manchurian Candidate," "Down to the Bone") as the sexy wife and mother Teresa who knows her husband is 'shady, sleazy and mixed up with the wrong people,' but who loves him nonetheless and is a fighter for her family. Watch Teresa go all vigilante, humorously adding to Joey's gun woes in the bargain, when faced with REAL evil. The ensemble is well cast with a myriad of character actors all staking their claims. The stylish looking hyper-kinetic camerawork and visual trickery of cinematographer James Whitaker ("The Cooler") gives the film much of its gloss and he ranges from a grungy desaturated look to Candyland color in service to the story. Production designer Toby Corbett ("Silver City") is also to be commended, especially as this may be the first production to use Prague as a New Jersey stand-in. Another amazing aspect of "Running Scared" is that with its edgy child endangerment, closeups of shaved strippers and violence so excessive as to be almost cartoonish, it managed to pull down an R-rating (New Line even infamously included a rather outre videogame on the film's website featuring Walker's character pleasuring his wife on a washing machine.) "Running Scared" is crazy and garish and kinda nuts. It has heaps of problems, but heck, it's a helluvalot better than most of the action thrillers churned out these days - "Firewall," anyone?

When a mob drug deal is bungled and a corrupt cop is killed, low-level Mafia functionary Joey Gazelle (Paul Walker) is given the task of getting rid of the gun that was used to shoot the policeman. Instead of disposing of the weapon, though, Joey decides to keep the gun, as “insurance,” but doesn’t know that he is putting his life and his family’s in deadly jeopardy in “Running Scared.” On the heels of his critical success with “The Cooler,” writer-director Wayne Kramer creates a crime thriller so gritty that you can sand a floor with it. From the opening shootout to the standoff finale between the Mafia gangsters and the Russian mob, Kramer takes us on a roller coaster ride that is uniformly exciting even with its tongue-planted-firmly-in-cheek script. Joey returns home with the offending weapon and proceeds to hide it with a stash of mob guns used in other crimes. He doesn’t know, though, that his son, Nicky (Alex Neuberger), and his friend, Oleg (Cameron Bright), are watching him. Joey’s wife, Teresa (Vera Farmiga), sends the neighbor boy home and the Gazelles settle down to dinner. The meal is interrupted when two gunshots ring out from next door with one of the bullets smashing a window and nearly hitting Joey. Gazelle, his own gun in hand, rushes to find out what happened. He enters a bloody scene where he discovers Oleg’s stepfather, Anzor (Karel Roden), shot in the shoulder. The wounded man tells him that Oleg was the perpetrator and he used a shiny, chrome-plated snub-nosed revolver – the same gun that Joey had hidden with his cache. The gun is incriminating evidence against his boss, Tommy “Tombs” Perello (Johnny Messner), and, if Joey doesn’t find the weapon, he knows there will be mob retribution to him and his family. This begins an 18-hour saga that steadily escalates in bullets fired and a fast-rising body count as he searches for the boy and the gun. Running Scared” takes us on a ride through the mean streets of New Jersey that leaves, in its wake, a huge pile of dead bodies and a dizzying whirl of circumstances that keep the hunted revolver tantalizingly out of Joey’s reach. Paul Walker, in a role completely opposite to his current nice-guy dog-lover in “Eight Below,” gives a tense performance as a low-level mob soldier entrusted by his boss to get rid of the incriminating cop-killer snub-nose. The shooting next door suddenly turns Joey’s insurance policy into the tool for the potential execution of the Gazelle family. Walker doesn’t give Joey much shading but I think that’s the character, not the actor. Joining Walker is a huge cast of characters consisting of Italian Mafia, Russian mobsters, a kind-hearted hooker (Idalas DeLeon), a vengeful pimp (David Warshofsky), a pair of murderous pedophiles (Bruce Altman and Elizabeth Mitchell), a crystal meth-cooking Russian (Roden), his ex-prostitute wife (Ivana Milicevic) and a host of others. Helmer Kramer marshals his extended group of players like a military commander conducting a battlefield operation. Running Scared” won’t be remembered by year’s end but it is an imaginative bit of storytelling that benefits from good casting and stylish filmmaking. Paul Walker is only given one note to play – angst-ridden and, as the title says, running scared – but carries it well enough thanks to his supporting cast. Young Cameron Bright is a sullen little boy, as Oleg, with good reason: he is a child-abuse victim from the hand of Russian expatriate stepfather, Anzor (amusingly played by Roden as a John Wayne-loving jerk and bully). Vera Farmiga takes the loyal, loving wife and mother role to a different level when Oleg is taken in by the pedophile couple that has less than good intentions. The scene, where Oleg clandestinely calls Teresa to save him from the creepy couple, is a non sequitur as far as the overall film is concerned. But, it is tensely handled and has a big, audience-pleasing (if that audience happens to be into ultra-violence and vigilantism) payoff by its end. The rest of the huge cast gets to chew scenery with vigor. Techs are extremely entertaining with very stylish camera work by Jim Whittaker effectively lending visual grit to the story using graininess and high-gain. Clever editing – you see the shooting that starts the downward spiral of events from different points of view – adds to the film’s frenetic pace, keeping the eye, if not the mind, amused for its 2+ hour runtime. The story, by director Kramer, is a spiral of incredible, often absurd, coincidences and spontaneous violence that has an edge-of-the-seat quality lasting all the way through to the exciting final shootout. The clunky happily-ever-after ending is a bit too nicey-nice but with all of the wall-to-wall action, ultra-violent gunplay and over-the-top writing it is an amusing ride.