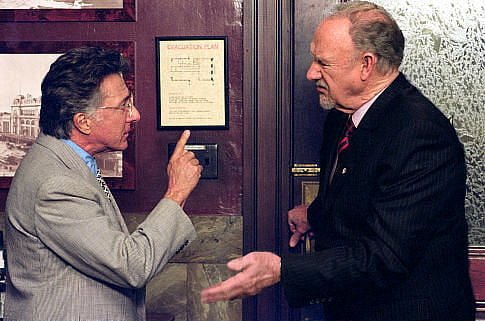 Nicolas Easter (John Cusack) recently moved to New Orleans and, as a good citizen, registered to vote. Soon after, he receives notice to attend jury duty and, like most people, tries to get out of it. Despite his pleas to the judge of the big case Nick is assigned to, he must do his civic duty. But, there is a method to his evasive madness as he takes on the role of puppet master in "Runaway Jury."

When the widow of the victim of an office shooting takes the gun manufacturer to court, the high stakes trial draws jury selection specialist Rankin Fitch (Gene Hackman), who guarantees a win to the defendant for a multi-million dollar price tag and Lawrence Green (Jeremy Piven), a morally motivated upstart who sells his services to prosecuting attorney Wendell Rohr (Dustin Hoffman) for 20% of his fee. What neither of these men know is that there is a third player, Nicholas Easter (John Cusack), who has scammed his way onto the jury itself in order to sway it to the highest bidder in "Runaway Jury." Brian Koppelman, David Levien, Rick Cleveland and Matthew Chapman adapt the John Grisham novel, switching focus from the tobacco industry to guns, a smart move both dramatically and cinematically. After a truly jolting opener, which sets expectations one way then unexpectedly veers another in depicting the crime, Easter is introduced telling his smoker's coughing super 'You should quit those things.' He seems an everyday Joe honestly anxious to get out of his call to jury duty. Meanwhile Fitch descends upon New Orleans like a celebrity nobody knows. As the crisply efficient Amanda Monroe (Marguerite Moreau) supervises the assembly of a surveillance room, Fitch's imminent arrival is monitored via walkie talkie. A flashy display of the tricks of Fitch's trade make Rohr look like a sitting duck. Once the game is afoot, the mysterious Marlee (Rachel Weisz), Easter's partner, delivers 'jury for sale' notices to both attorneys. Rohr refuses to listen to Green's entreaties to take the threat seriously until a display of power is wielded when Easter gets the jury to deliver a 'Pledge of Allegiance' in court. A three way game of chess begins as jury members begin dropping. Director Gary Fleder ("Kiss the Girls") delivers a big, hulking Hollywood movie that pushes all the right entertainment buttons. The cast all do solid, if unexceptional work, although Hoffman plucks his "Tootsie" voice out of retirement to double as a Southern accent. He and Hackman get a chance to grandstand through a men's room confrontation that was added just to get these two in a scene together. Supporting players such as Cliff Curtis, Nora Dunn and Rusty Schwimmer add flavor as embattled jurors. The film's strengths and minuses lie mostly in Grisham's source material. While Easter's psychological trickery gaining the favor of his fellow jurors is very entertaining, the plot is generally contrived and resolution morally suspect. "Runaway Jury" always has another trick up its sleeve, though, leaving little time to ponder its shortcomings. It's a slick production that, while not up to "The Firm," is certainly solid second tier Grisham oeuvre.

As the film opens, a handsome young businessman calls his attractive secretary into his office where, we think, he is about to seduce her. Instead, he pleads with her to help him remember a child's nursery song so he can sing it for his little boy's birthday party. Suddenly, there are gunshots in the hallway and, when the man investigates, he sees his coworkers being gunned down. He goes back to his office to hide but he, too, becomes a victim of the killing spree. Jump ahead two years and the jury is being selected for the case of the man's wife, Celeste Wood (Joanna Going), against the Vicksburg Gun Company, the makers of the assault weapon used by her husband's killer. Taking her case is veteran good guy liberal lawyer Wendell Rohr (Dustin Hoffman). On the other side, for the defendants, is high-powered attorney Durwood Cable (Bruce Davison). Backing up Cable is the infamous Rankin Fitch (Gene Hackman), and his team of technicians, whose only goal is to see that the jury selected will decide in favor of the gun makers. Meanwhile, Rohr, with his tiny but dedicated staff including juror specialist Lawrence Green (Jeremy Piven), has the same goal in mind and he, too, wants a jury that will decide in favor of his client. This upcoming clash of the Titans runs into a snag, though, when Marlee (Rachel Weisz) approaches both attorneys and tells each that she can sway the jury in their favor - for $10 million. If you are familiar with the John Grisham novel you will note the major change from the tobacco industry to the gun manufacturers as the big bad guy. With the way the world has changed in the few short years since Grisham penned "Runaway Jury," this revision makes sense. As such, the script, by a bevy of writers involved in the adaptation, does a decent job in the transition while maintaining the integrity and complexity of the author's original story. "Runaway Jury" has a huge ensemble cast with John Cusack, Gene Hackman, Dustin Hoffman and Rachel Weisz leading a who's-who of character actors. The list is long with the likes of Bruce McGill, Luiz Guzman, Jennifer Beal, Cliff Curtis and many more appearing in small roles. These talented actors all help contribute to the craftsmanship of the film helmed by Gary Fleder. The complexity of the story is well handled as there are several lines being followed with Nick and Marlee's scam, Rohr's inner conflict over selling out to win and Fitch's confident win-at-any-cost operation. The defense team operation is by far he most complex as Rankin walks into a command central environment bustling with the busy people who use their hi-tech tools to dig into the lives of the jurors, just to have an edge in the case outcome. The set design for this interesting locale is over the top with massive screens displaying everything about the lives of their victims. It is kind of creepy in a George Orwellian way. "Runaway Jury" is, being a Grisham adaptation, a liberal minded movie that wears its heart on its sleeve but does so proudly. The characters have a distinct good versus bad, right versus wrong feel and there is not much shading allowed except on a surface level - like Rohr's inner struggle. Still, this is solid entertainment that won't have you complaining, "it wasn't like that in the book."