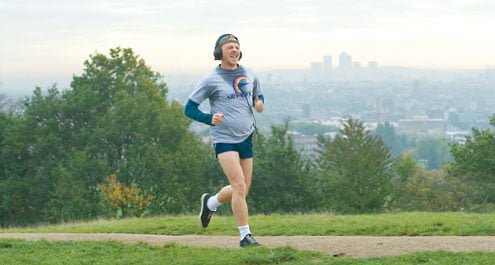 Dennis (Simon Pegg) is a little overweight and, five years later, mortally regrets his decision to leave his very pregnant bride, Libby (Thandie Newton), standing alone at the altar. When he learns that his pretty ex is engaged to another man, marathon runner Whit (Hank Azaria), Dennis vows to enter the next big race and maybe, just maybe, win back Libby’s heart in Run Fatboy Run.”

It looks like British writers Simon Pegg ("Shaun of the Dead," "Hot Fuzz") and Michael Ian Black have been studying the romantic comedies of Adam Sandler. "Run Fat Boy Run" follows the painfully obvious Hollywood cliche of a loser trying to woo back the girl he let get away who is on the verge of marrying the seemingly better guy who turns out to be a jerk. On the plus side, feature debuting director David Schwimmer has made a technically sound film and knows how to set up a sight gag. Many of these are provided by the quirky cast, who also lend an above average feel to what is, at heart, a very average effort otherwise. Star Simon Pegg brings on what's made him likable in his previous incarnations and Schwimmer's old "Friends" costar Hank Azaria makes sleazy seem easy (besides looking way buff!). Dylan Moran is aces as Pegg's iffy sidekick as is Harish Patel ("My Son the Fanatic") as disapproving landlord turned race coach Mr. Ghoshdashtidar. Watch for costume designer Annie Hardinge's deft hand with 1980's rock tees.

As the film opens, a handsome young businessman calls his attractive secretary into his office where, we think, he is about to seduce her. Instead, he pleads with her to help him remember a child's nursery song so he can sing it for his little boy's birthday party. Suddenly, there are gunshots in the hallway and, when the man investigates, he sees his coworkers being gunned down. He goes back to his office to hide but he, too, becomes a victim of the killing spree. Jump ahead two years and the jury is being selected for the case of the man's wife, Celeste Wood (Joanna Going), against the Vicksburg Gun Company, the makers of the assault weapon used by her husband's killer. Taking her case is veteran good guy liberal lawyer Wendell Rohr (Dustin Hoffman). On the other side, for the defendants, is high-powered attorney Durwood Cable (Bruce Davison). Backing up Cable is the infamous Rankin Fitch (Gene Hackman), and his team of technicians, whose only goal is to see that the jury selected will decide in favor of the gun makers. Meanwhile, Rohr, with his tiny but dedicated staff including juror specialist Lawrence Green (Jeremy Piven), has the same goal in mind and he, too, wants a jury that will decide in favor of his client. This upcoming clash of the Titans runs into a snag, though, when Marlee (Rachel Weisz) approaches both attorneys and tells each that she can sway the jury in their favor - for $10 million. If you are familiar with the John Grisham novel you will note the major change from the tobacco industry to the gun manufacturers as the big bad guy. With the way the world has changed in the few short years since Grisham penned "Runaway Jury," this revision makes sense. As such, the script, by a bevy of writers involved in the adaptation, does a decent job in the transition while maintaining the integrity and complexity of the author's original story. "Runaway Jury" has a huge ensemble cast with John Cusack, Gene Hackman, Dustin Hoffman and Rachel Weisz leading a who's-who of character actors. The list is long with the likes of Bruce McGill, Luiz Guzman, Jennifer Beal, Cliff Curtis and many more appearing in small roles. These talented actors all help contribute to the craftsmanship of the film helmed by Gary Fleder. The complexity of the story is well handled as there are several lines being followed with Nick and Marlee's scam, Rohr's inner conflict over selling out to win and Fitch's confident win-at-any-cost operation. The defense team operation is by far he most complex as Rankin walks into a command central environment bustling with the busy people who use their hi-tech tools to dig into the lives of the jurors, just to have an edge in the case outcome. The set design for this interesting locale is over the top with massive screens displaying everything about the lives of their victims. It is kind of creepy in a George Orwellian way. "Runaway Jury" is, being a Grisham adaptation, a liberal minded movie that wears its heart on its sleeve but does so proudly. The characters have a distinct good versus bad, right versus wrong feel and there is not much shading allowed except on a surface level - like Rohr's inner struggle. Still, this is solid entertainment that won't have you complaining, "it wasn't like that in the book."