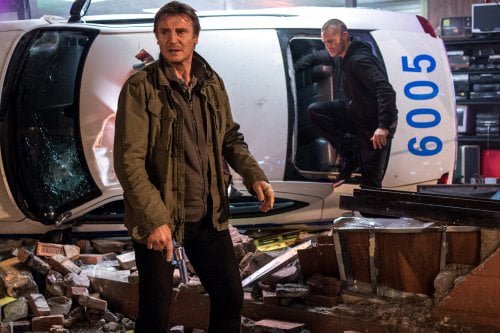 A good cast and some insanely executed chase scenes in a gritty New York are weakened by screenwriter Brad Ingelsby's ("Out of the Furnace") hard to accept central premise. Still, those who have latched onto Liam Neeson's late action hero guise will find more to engage with here than in most of his other outings. Director Jaume Collet-Serra ("Orphan," "Non-Stop") gets fine work in his handful of scenes featuring Neeson and Harris and as the worn down police detective who's been on Jimmy's trail for over a decade, Vincent D’Onofrio ("The Judge") exudes good old-fashioned rumpled New Yawk tenacity. After a flash forward, the story begins 16 hours earlier in Maguire's Old Abbey Pub where Jimmy awakens to the obvious disrespect of its staff and patrons. Visiting the basement office for $800 to get his oil heater fixed, Shawn's son Danny (Boyd Holbrook, "A Walk Among the Tombstones"), an entitled cokehead, humiliates the man further, insisting he play Santa at Shawn's Christmas party if he wants the money. The alcoholic Jimmy is a disaster, but his compassionate, oldest friend Shawn has him taken to a bedroom to sleep it off and get a hot meal. They share an old sentiment, Wherever we're going, when we cross that line, we're going together.' Later, just as he's settled down to watch the New York Rangers take on the New Jersey Devils, Jimmy gets a most unexpected call from his estranged son Mike, a boxing coach and limo driver who just drove a couple of Albanian drug traffickers to Danny's place, only to witness the kid gun them down. Danny's clearly after him, so Jimmy high tails it over to Mike's, advising him that the last thing he should do is call the cops. When Danny arrives and breaks in, Jimmy returns just in time to save his son by killing Shawn's. And here lies the crux of the film's problem. We've seen Shawn flatly refuse to agree to Danny's plan to import heroin and acknowledge that his son went wrong, yet he not only puts a bounty on old pal Jimmy's head, but on Jimmy's innocent son, an upstanding family man, all after expressing sentimental loyalty to the man. But the multi-pronged manhunt that ensues is complex and exciting. Jimmy not only got Shawn's goons on his tail, but a Terminator-like hit man Price (Common, "Selma"), dirty cops and the morally righteous Harding (D’Onofrio), whom Jimmy actually calls because he's the only man he can trust. There's also the matter of keeping Mike and his family, wife Gabrielle (Genesis Rodriguez, "Tusk"), an adorable daughter and infant son, safe, all while Jimmy's past ('What's the number, Jimmy? 16? 17?) comes flooding back to haunt him. Collet-Serra employs the CGI heavy zoom out, fly-over, zoom in device that seems at least ten years out of date to switch locales, a choice that becomes increasingly annoying, but once his camera lands, he generally delivers the goods. Mike's escape from Danny on foot is a tense bit of closed in maneuvering, but when he ignores dad's advice and calls the cops to report Danny's death things really get crazy as Mike's cuffed and thrown into the back of a squad car being guided by Frank to a clearly fateful destination. But there's Jimmy in his beat up black Camaro, running them down. There's a chase through a subway and the hockey crowd at Madison Square Gardens When Jimmy and Mike go to a Brooklyn project to find Mike's protegee Legs (Aubrey Joseph, "Fading Gigolo"), who was in his limo and witnessed Danny's crime, police helicopters circle overhead as the building's closed off from below except for Price who's killed a cop to gain admittance. But the director's at his best when he stages quieter scenes with his veterans, particularly a negotiation Jimmy's called with Shawn in a restaurant filled with memories. Watching these two work together is so pleasurable, one almost forgets the mobster's code's gone off the rails. The film also features a cameo by a grizzled Nick Nolte as Jimmy's estranged brother and Bruce McGill adding color as Shawn's taciturn consigliere Pat. Grade: