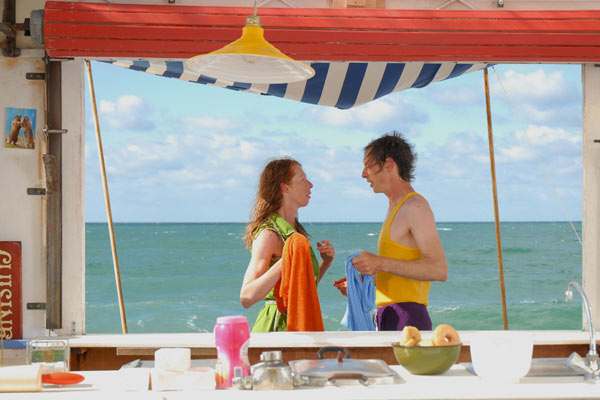 Dom (Dominique Abel) and Fiona (Fiona Gordon) are schoolteachers in a rural French town. They share two passions: each other and Latin dance. One evening, driving home from a successful dance competition, they have a horrible accident, leaving them in a hopeless state. But, love and humor intervene and the couple comes to realize that they can start a new life in “Rumba.”

Fiona and Dom (Writer/director/stars Fiona Gordon and Dominique Abel, "L'Iceberg") both teach at a rural school, she as a tongue-twisting English teacher, he as an enervated gym instructor, but when they're off duty, they like nothing better than a "Rumba." Jacques Tati with dance! "Rumba" is a delightful romp woven together with a most unlikely story. Teachers Fiona and Dom suffer a terrible accident (ironically after they have successfully driven a speeding car while changing into outfits for a dance competition) that leaves her missing a leg and him an amnesiac. Upon discharge, each is told to take care of the other, but their afflictions cause them to lose their jobs and a series of mishaps, their homes. That these scenes are pretty funny is a credit to the filmmakers. When Dom goes out to buy bain au chocolat for breakfast one day, he forgets where to get off of the bus. At the last stop, he's mugged for his croissant by a man (collaborator Bruno Romy) who later feels such guilt he brings Dom into his home and business, selling donuts by the seashore. One year later, Fiona finds him. Like a Tati film, "Rumba" is often silent and is filled with a series of delicious (and complicated) sight gags that move the story along. Dom snags Fiona's knit dress and appears opposite her with several townspeople ensnared - Fiona, not seeing them but realizing her dress is gone, pulls on the thread until everyone disentangles and Dom reappears. The "Lady and the Tramp" spaghetti eating scene is spoofed in what appears to be one take and a whole plate of spaghetti in one noodle and one wonders - how did they do that? A skit where Dom makes an omelet with his short term memory is as funny as it is classic. Physically the two filmmakers are astounding, particularly the fluid Gordon (a Canadian who must be of Scottish descent, given her name and Tilda Swinton looks) who moves like a dancer and pratfalls like an ace whether benefiting from two legs or only one. The pair dance together in three extended set pieces, the best of which features them dejected after their firing sitting back to wheelchair as their silhouettes stand and dance behind them. "Rumba" is made by multi-talented people who know how to balance erotic dance moves with some very funny slapstick. At just 77 minutes, it all proves they know how to leave 'em laughing.

Writers-directors Abel, Gordon and Bruno Romy try to rustle up a whimsical little film that is a cross between Jacques Tati and a dance musical. The result, though, is a repetitive concoction of slapstick humor and a series of dance numbers inserted to flesh things out to an over-long 77 minutes. Certainly, the multi-hyphenate filmmakers are dedicated to their work but “Rumba” should have been considerably shorter. I like good slapstick and “Rumba” is rife with it, but the length of the gags makes them lose their punch quickly. In one scene, now one-legged Fiona returns to her class on crutches which begins amusingly enough but very soon devolves in repeating the same gag over and over. The result here and in other such scenes is tedious, at best. The music and the dance numbers are nice but the direction feels amateur overall. Production design is well done with good use of bright neon colors. Lensing is simple with the camera set in a fixed spot for each successive scene, working best when the dance takes over the screen. I might have enjoyed “Rumba” more if the filmmakers’ enthusiasm was reigned in. A tighter, much shorter bit of true whimsy could have been the result. It is a nice tip of the hat, though, to Jacques Tati’s near silent style with its minimal dialog.