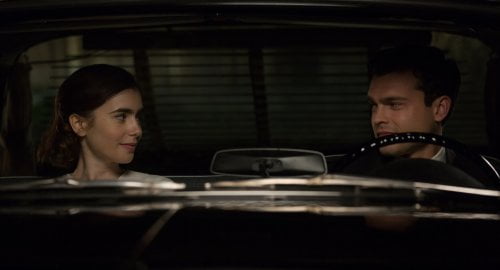 In 1958, small town beauty queen Marla Mabrey (Lily Collins, "Cinderella") arrives in Hollywood with her mother (Annette Bening), who intends to keep her daughter's virginity and Baptist morals intact. They are picked up by new driver Frank Forbes (Alden Ehrenreich, "Hail, Caesar!"), a religious Methodist engaged to his high school sweetheart. The two find themselves falling in love while circumnavigating the eccentricities of their new boss Howard Hughes (Warren Beatty). He's forbidden romance between employees, but they find "Rules Don't Apply."

Writer/director Warren Beatty ("Reds"), whose long gestating film is his first since 1998's "Bulworth," springs back with a frothy comedy steeped in the golden glow (cinematography by Caleb Deschanel) of the old, waning Hollywood studio system. Collins is delightful as the young hopeful you can't act, sing or dance, Ehrenreich more intently focused. Beatty himself gives a deliciously loopy spin to his demanding but largely benevolent Hughes. The film actually begins in 1964. A newly released biography claims Hughes is suffering from dementia and gathered press await a phone call from the man to prove otherwise. Frank, now a trusted insider, despairs of rousing his boss from his curtained enclave. Flash back to 1958. Frank delivers Marla and her mother Lucy to the beautifully appointed home high above the Hollywood Bowl which has been engaged for Hughes's newest contract player. As Frank continues to drive Marla about town, even letting her take the wheel, the two trade their dreams. Marla's frustrated that her promised screen test has not yet happened. Frank hopes to get Hughes to underwrite a parcel of land off Mulholland Drive for a housing development. When they each, separately, finally meet the man, his reactions are puzzling. Brought to the Beverly Hills Hotel by senior driver Levar Mathis (Matthew Broderick, amusingly lecherous), Marla's ensconced in a darkened room and offered champagne, which she refuses. Hughes eventually appears in the shadows, but the man appears to have something other than a screen test on his mind until he's dissuaded by Marla's prudery. Frank is finally assigned to pick up the big boss, and seizes the opportunity to broach his scheme. Hughes responds with a walk along the harbor, leading to a table already set with hamburgers and Hughes's favorite view - his Spruce Goose, the largest airplane ever built. When Lucy sees just how many girls Hughes has under contract and the humiliating conditions they're forced to work under (paychecks are lowered from a window by a basket), she insists they leave, but Marla stays. She and Frank are confidantes and when she unloads her insecurities, Frank insists rules do not apply to her. Frustrated by Hughes's slippery ways, Marla grows bolder, downing a bottle of bubbly and singing him the song she's written, 'The Rules Don't Apply.' But her and Frank's paths diverge, Marla succumbing to Tinseltown sin, Frank promoted to deal with such emergencies as Hughes's demands for banana nut ice cream only available in Las Vegas. By the time we circle around to where the film began, the two young, would be lovers are in very different places. Beatty's lavish period production corresponds to the filmmaker's early days as an actor, a place of ornate wealth and the more everyday L.A. of hopeful dreamers. The sprawling cast includes Candice Bergen, delivering hilariously silent reactions as Hughes's secretary Nadine, Martin Sheen as Hughes CEO Noah Dietrich, Alec Baldwin as businessman Bob Maheu, Oliver Platt as frustrated banker Forester, "The Girl on the Train's" Haley Bennett as a saucy actress, Eileen Ryan as Frank's grandmother, Taissa Farmiga as his fiancee, Ed Harris as his dad, Amy Madigan as his mom and Steve Coogan as a pilot, many, like Harris and Coogan, appearing in one brief scene. Blink and you'll miss Paul Sorvino and Dabney Coleman. "Rules Don't Apply" is a clever comedy about two devout youngsters forever changed by entering the orbit of a man who never lived by them. The same could be said for the man who's made it. Grade:

Hollywood, 1958. Marla Mabrey (Lily Collins) is one of a bevy of contract actress working for filmmaker/billionaire Howard Hughes (Warren Beatty). Her new driver, Frank Forbes (Alden Ehrenreich), is soon smitten with the pretty starlet and, together, breaks the Hughes cardinal rule: no one working for the man shall date a contract actress. But, for the young couple, these “Rules Don’t Apply.” Warren Beatty has not been on the film scene for many years, discounting, of course, the 2010 TV film, “Dick Tracy Special.” – prior to that he last performed in “Town & Country (2001)” and last directed and starred in “Bulworth (1998).” He returns to the film biz as producer/director/star with his own take (co-written with Bo Goldman) on the later years of reclusive billionaire, Howard Hughes. The focus of “Rules Don’t Apply” is not on Hughes, though Beatty chews the scenery with gusto as the infamous recluse. The two young leads, Lily Collins and Alden Ehrenreich, are the main act in this little play about star crossed lovers who try to make a life under the iron-handed control of their boss. Marla and Frank are true innocents in that land of predators called Hollywood. Both are the spawn of small town life and both devout Christians and virgins, making theirs a fish out of water tale. While the two young stars hold there own with the iconic Warren Beatty, it is his Howard Hughes that gets to most layering of character: is he just a rich nut job who becomes more and more delusional or is he a genius who is just misunderstood, or both? If you know about Hughes, you will probably choose the former.