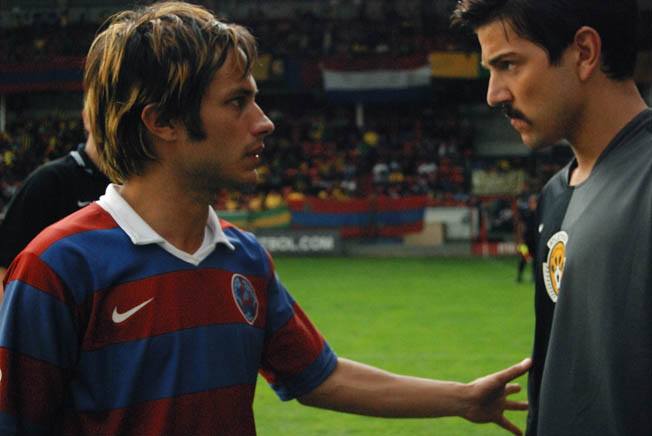 Half-brothers Tato (Gael Garcia Bernal) and Beto (Diego Luna) Verdusco work on a rural Mexican banana plantation and are stars on the local village soccer team. They have dreams of escaping their drab lives with Beto wishing to be a national soccer star and Tato hoping to be a superstar singer. Fortune, in the guise of soccer talent scout Baton (Guillermo Francella), accidentally appears at their door when his car breaks down near the village. While waiting for his fancy auto to be repaired, the scout watches a local match and spots the brothers. Impressed by both, Baton can only give one the chance for success and fame in “Rudo Y Cursi.”

Writer and first time feature director Carlos Cuaron tells a story about sibling rivalry, brotherly love and the rise and fall of Tato and Beto and their careers. He reunites Gael Garcia Bernal and Diego Luna (their first teaming was in the terrific “Y tu mama Tambien”) and the chemistry between the friends and colleagues is palpable in their performances as siblings. Tato and Beto are brothers, friends and sports rivals when Baton gets them both in the game but with opposing teams – with Beto as top goal scorer for the prestigious Amoranto Club and Tato the shutout king in the net for the Nopaleros Team. What you expect to be a routine tale of two brothers, rivals on the game field who are destined to face each other in battle, is far more complex and, as a result, more interesting. Tato, nicknamed Rudo (Tough) for his aggressive play on the soccer pitch, really wants to be a pop singer in the US. Baton, because of Tato’s stellar goalkeeping, gives him the chance to record a song and make a music video (a very kitschy Spanish rendition of Cheap Trick’s “I Want You to Want Me” that is comical in its innocence). His fame both on and off the soccer field earns him the attention, and affection for the price of a Hummer, of Mexico City’s sexy TV weathergirl, Maya (Jessica Mas). Life is perfect for Rudo, but not forever. Beto is a likable, lovable lug with a pretty wife, a bunch of kids and a serious gambling habit and debt. His nickname, Cursi (Sweet), is perfect for the amiable, erratic gambling addict who destroys his chance to rise to fame on the soccer field because of his addiction to life altering consequences, both mental and physical. Bernal and Luna give a pair of fine, equal performances that are thoroughly convincing. They are more different than alike but the alike parts do, indeed, feel like my brothers and me. Carlos Cuaron does a solid job both writing and directing and makes an auspicious helming debut splash. He benefits from having an experienced and assured writer (himself), organic lensing by Adam Kimmel that has a retro feel (the music video is worth rerunning a few times), good performances (with Guillermo Francella giving a terrific perf as the tough but fair Baton). You like him even after he shows his darker, more ruthless, side. Writer Cuaron, brother of fellow helmer Alfonso (“Y tu mama Tambien,” which Carlos scripted) has the right feel for his combination of the two brothers and their conflicting careers (though both want to just build a palatial home for their mother), especially as they are driven to confrontation on the soccer field. Things do not follow an expected path, making “Rudo Y Cursi” a good choice for the filmgoer who wants to think about the story rather than zone on the action of so many other sports films. The stars make the moves typical of savvy soccer players with their grace of movement, looking like they have played the games since kids (and they probably have). It is more than just a sports movie.