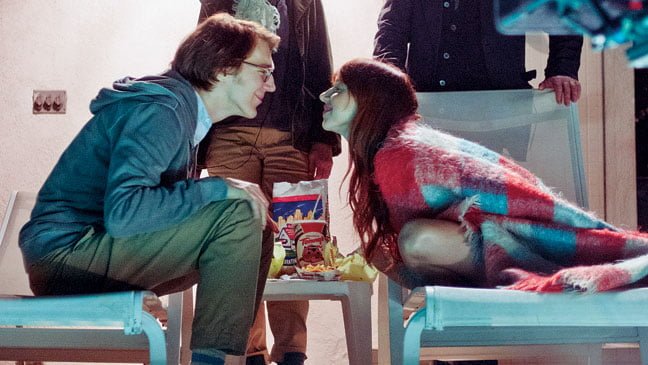 10 years ago, Calvin (Paul Dano) was a literary wunderkind and had a best seller before he turned 20. Since then, he was struggled to get back on top but writer’s block has kept him back. He also does not have a girlfriend. On the advice of his shrink, Dr. Rosenthal (Elliot Gould), he should not worry about his writing by writing for himself. Cal takes the advice to heart and comes up with a character to write about – “Ruby Sparks.”

At just nineteen, Calvin (Paul Dano, "There Will Be Blood," "Being Flynn") wrote one of the great American novels. Ten years later, he's still being celebrated for it but is in a downward funk, unable to find the inspiration to write another. After being given a writing assignment by his shrink (Elliott Gould), Calvin begins to write about the girl of his literal dreams and is off and running, his typewriter a conduit to the perfect romance. But his creation begins to make herself manifest in his modern home, first when his dog Scotty turns up a red woman's sandal, then when the woman herself appears like she's always been there. Calvin calls his brother Harry (Chris Messina, "Vicky Cristina Barcelona," "Like Crazy") fearing for his sanity, then is amazed when Harry, too, can see "Ruby Sparks." Directors Jonathan Dayton & Valerie Faris return to feature film making six years after they hit it big with "Little Miss Sunshine," but despite the talent they've associated themselves with this time, they fail to make the same kind of impact. Star Zoe Kazan's ("The Exploding Girl") first screenwriting effort is a thoughtful, funny, sad and sometimes sexy take on the Pygmalion myth and she's written a hell of a role for herself, a showcase for every type of mood and emotion, but the directors haven't succeeded in making the tale take on a life of its own - it feels just like the writing exercise that Kazan begat and handed fictionally to her real life partner and costar Dano. (Dano, oddly, is playing a writer plagued by claims of genius for the second time this year, after "Being Flynn.") Calvin is the very epitome of the word 'bookish,' his shaggy head and owlish glasses atop a thin body folding in upon itself, his mind scattered enough that he forgets about appearing at a gala for the 10th anniversary of his book. He arrives in time, disheveled, to be fawned over and compared to J.D. Salinger. In his dreams, though, the girl he keeps meeting via his dog in the park doesn't know who its namesake, F. Scott Fitzgerald, is and, once explained, teasingly tells Calvin he's killing his idols. Once she shows up in his home and Harry comes over, he suggests that Calvin can only truly know she's his creation come to life by writing and when Calvin writes that she speaks French, Ruby's speech immediately shifts to the Romance language. Calvin reverts to the status quo and vows never to write about her again. The couple remain deliriously happy until Calvin relents to her wish to visit his mother Gertrude (Annette Bening, "The Kids Are All Right") in Big Sur. Gertrude's hippy lifestyle with her funky furniture making lover Mort (Antonio Banderas) is the antithesis of her son's and while Ruby enjoys his family, Calvin holes up with a book. Back home, Ruby, upset with his behavior, begins to assert her independence, stating that she will spend one night a week at her own apartment. When Calvin breaks his vow to get her back, the situation grows ever worse. Cinematographer Matthew Libatique ("Black Swan") first presents Ruby backlit like a goddess, her face in shadow haloed in a golden glow, a lush visual when contrasted with the stark white of Calvin's multi-level modern abode, a blank slate or empty page as it were. Calvin is more comfortable alone than with people, so it's ideal for him to create his own partner, one that challenges and inspires and delights him with whom he can be himself and seem to please. Zoe Kazan is the East Coast version of Zooey Deschanel - descended from Hollywood royalty, piercing blue eyes, long auburn hair and a funky, colorful wardrobe style - and she's perfect paired with Dano even though she's given the greater actor's showcase to herself. The rest of the ensemble is a bit oddly cast with Bening and Banderas offering the most pleasure as the offbeat older couple. Dano and Messina do not look like they possibly could have come from the same gene pool (a quick glance at a photo of mom with their biological dad attempts to fill in the blanks), and Messina gives Harry an easy-going nature more akin to mom's. Alia Shawkat ("Cedar Rapids") disappears for perhaps the first time in the thankless role of Harry's wife Mabel. As Calvin's editor, Steve Coogan ("The Trip") again appears to play an exaggerated version of himself, dialed down a notch. One wishes for more of 'True Blood's' Deborah Ann Woll as the ex who's hovered over Calvin's sense of worth ever since their breakup. "Ruby Sparks" wraps with a not-very-surprising bit of hopefulness that nonetheless causes all kinds of confusion for everything that's come before. The writing might work on a surface level, but it just doesn't work that way in real life.

This is a male fantasy story that has an interesting build up – imagine creating a living, breathing person with just your will – but once the premise is set up the idea gets repetitive. In the last half, Cal, once he realizes that he created real life Ruby, frequently rewrites her when he does not like the way his creation changes – even though he initiated all the failed changes in Ruby’s personality. Paul Dano tries, but his Cal is a bland guy who makes bad decisions, for himself and Ruby, as he tries to make the perfect woman - as if such a creature could even exist. The film belongs to scripter and costar Zoe Kazan, who has drawn herself a complex, fully dimensioned character in Ruby. The actor deftly humanizes Ruby as the rewrites, by Cal, alter her character’s behavior. If she is too independent, he makes her needing. If his rewrite makes her argumentative, he makes her submissive. This happens repeatedly with the end philosophy that perfection is an elusive thing that cannot be captured. I got the point early on. Kazan’s creation of Zoe and her performance as that character should be noteworthy at the end of the year. The scripter-star shows skill at creating femme characters but not so much with the guys. Still, Kazan’s perf is the real draw to “Ruby Sparks.”