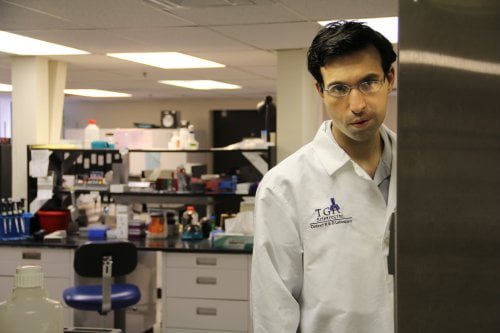 Paul (Alex Karpovsky) works in a biotech company just outside Boston. During the firm’s Christmas party he hooks up with co-worker Danielle (Jaime Ray Newman) for a weekend tryst in bed. Afterward, he begins to over think his relationship with pretty woman, believing that she is the one for him. Things turn ugly, though, when she rejects his advances in “Rubberneck.”

Research scientist Paul Harris (Alex Karpovsky, "Beeswax," HBO's 'Girls') has an amazing night with coworker Danielle (Jaime Ray Newman, TV's 'Eastwick') after TGA Sciences' holiday party, but when he tries to continue the relationship, she makes it quite clear that it has already run its course. Alex tries to act natural crossing paths with Danielle every day at work, but when she takes up with married coworker Chris (Dennis Staroselsky), Alex's obsession crosses a line into dangerous territory in "Rubberneck." Cowriter (with Garth Donovan)/director/star Alex Karpovsky has made a stylish, suspenseful psychological thriller with some pretty unique filmmaking ingenuity. This Boston based character study is quiet, yet gripping, and should delight local area filmgoers with its nods to the Coolidge Corner Theater (with Dedham Community Theater's lobby standing in) and Cambridge's Brattle Theater (where the film will have its local premiere). We're as mystified as Alex after Danielle turns chilly after a night of hot sex and intimate conversation. Gradually, though, as we spend more time with Alex, we learn that the man has a hard time letting go that becomes more than a bit creepy. His training of two new recruits, one of whom is Chris, exhibits an attachment to his labs guinea pigs which turns chilling with Karpovsky's cut to Alex's dissection of same. Eight months after their one night stand, Alex engineers encounters that seem mundane on the surface, but his life outside the office consists of visiting his single sister Linda (Amanda Good Hennessey) and his nephew Sean (Luke Donovan). A mention of a date with a new woman Kathy (Dakota Shepard) appears to be a lie, then turns out to be true...until it isn't, really, much like our entire perception of Alex. Danielle is still the main object of Alex's desire and after he follows her on an assignation with Chris, his anonymous interference sets horrible events in motion. Occasional cutaways to bare feet stepping down white stairs are foreboding, but again, Karpovsky has something other than what we might expect to reveal. Production design has a sterile aesthetic in keeping with the central lab environment (even a Boston underground Red Line platform looks untarnished), and if there is a criticism to be made here, the occasional use of dissolve cuts undermine it. The film also loses steam as it reaches its climax, perhaps due to the latent nature of the psychology motivating Alex's behavior. Still, this is impressive filmmaking, especially from a filmmaker who also delivers a complex, sympathetic performance despite his character's unsettling characteristics. If this is what Karpovsky can do with a budget partially funded by recycling scrap aluminum, there may be more precious metal in his future.

Boston-area actor-writer-director Alex Karpovsky creates an original story of obsession, delusion and murder that is fresh and well made. I love when a Boston-based filmmaker shoots his or her film in this area. It is always fun for the locals to spot the different locations and see how filmmakers play with reality of the terrain. (A good example of this is from “Good Will Hunting” when Matt Damon’s and Robin William’s characters walk out of Bunker Hill Community College, Charlestown, turn the corner and are in Harvard Square, Cambridge, which is miles away.) The script, by Karpovsky and Garth Donovan, keeps the viewer interested throughout and does not go in predictable ways. Things appear to be going well for Paul when we first meet him but cracks soon appear in his façade as his delusional obsession with Danielle becomes violent and out of control. The multi-hyphenate Karpovsky does it all with an assured hand garnering solid performances from all (himself included). Techs are first rate despite a non-Hollywood budget. Locations, familiar all, work well, especially the biotech company, a real company operating in Medford MA that allowed the movie to be filmed during the regular business hours. The cooperation Karpovsky gets in staging his production is impressive.