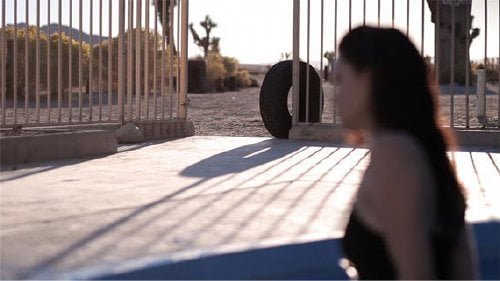 A group of sightseers gather in the California desert to observe a remarkable phenomenon. A discarded tire comes to life and rolls across the land. It crushes a plastic bottle and rolls over a scorpion but is frustrated when it cannot crush a beer bottle. As the observers watch, the tire begins to shudder and, ten feet away, the bottle explodes. This begins a rampage that works its way up the food chain all the way to man in “Rubber.”

Lieutenant Chad (Stephen Spinella, "Milk") instructs his audience that all great films contain an element of 'no reason.' We join a varied group of people in the desert, all training binoculars on the horizon, waiting for the 'film' to begin. 'It's boring already' comments one. Then an abandoned tire rises from its resting place, a bit wobbly at first, then confident, especially after squashing a plastic bottle. Once 'Robert' discovers he has telekinetic powers, though, he begins a killer rampage, leaving "Rubber." Writer/cinematographer/editor/director Quentin Dupieux has joined together the hilariously stupid story of a tire who becomes a supernatural serial killer with a deconstruction of the movie itself and it's a real original. It's a film with cheesy effects that nonetheless manages to inspire awe with the way a tire moves and expresses itself. Some choice music, like the oldie "Just Don't Want To Be Lonely" with its bouncy 'Ba ba da,' certainly helps infect us with the tire's happiness after it discovers it can make a bunny explode. This tire even has memory flashbacks! Although the film's end credits name the tire Robert, I was happier calling him Treadie (as in rhymes with Freddy) and damned if the little sucker isn't also a tad lascivious as well as murderous. In a sequence that recalls "The Devil's Rejects" with its rundown desert motel, Treadie watches the woman who's caught his eye, Sheila (Roxane Mesquida, "Fat Girl"), get into her shower. 'This is the first time I've identified with the tire!' says an excited spectator. The motel room punch line is a good one. Meanwhile the Accountant (Jack Plotnick, "Beverly Hills Chihuahua") who accompanied the cop at the opening delivers roast turkey to the famished audience who devour it like zombies eating brains. Apparently someone thought the film should end, but here Dupieux reflects on the concept that a movie doesn't exist if no one's watching it. Chad, whose been telling his cops that nothing is real, must reverse course, shamefaced, during the same scene, pointing to a tire as a suspect portrait. Dialogue continues to get sillier and the ending is another tip of the hat to the horror genre. Dupieux does his own great camera work which not only helps define his lead character but makes great use of his California desert locations. Exploding heads are done the old fashioned way, suiting the movie's comic sensibility, but the effect of the tire rolling across the desert or down the highway passing a cop car is ingenious in its simplicity.

The old car racing slogan “where the rubber hits the road” takes on new meaning with “Rubber.” The film begins in the desert where a deputy sheriff addresses the camera directly. He rattles off a string of movie titles, including “The Texas Chainsaw Massacre,” and asks us: why were they made? The answer: no reason. Then, “Rubber” does hit the road. Kitschy is a good word to describe “Rubber,“ a film that will garner love it or hate it responses from its audience. However, the true film buff, like me, will appreciate the black humor and wit that pervades this wacko movie by sophomore multi-hyphenate director-writer-cinematographer-editor Quentin Dupieux. Others will likely think it ludicrous and stupid. It may be, but the filmmaker had me laughing out loud at times – and I am a tough audience when it comes to comedies.