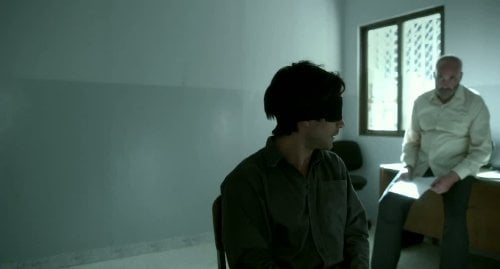 In 2009, London-based journalist Maziar Bahari (Gael Garcia Bernal) kisses his pregnant wife, Paola (Claire Foley), good bye and promises to be gone “just a week.” He is heading to Iran to cover that country’s presidential elections for Newsweek magazine and has video camera in hand. But, the elections do not go as predicted and Bahari decides to stay to cover the controversial aftermath in “Rosewater.”

In the summer of 2009, Tehranian Newsweek journalist Maziar Bahari (Gael García Bernal, "Letters to Juliet," "No") left his London home and pregnant wife for what he thought would be a short trip to cover Iran's elections where incumbent Mahmoud Ahmadinejad was being challenged by the popular Mir-Hossein Mousavi. While there, he was interviewed for Jon Stewart's Comedy Central show, but the jokes about Bahari being a spy were one of the things held over his head when he was arrested by Revolutionary Guard police, who held him in solitary confinement for 188 days using torture to procure a confession. The incident led Jon Stewart to make his screenwriting and directorial debut. But while the subject is certainly worthy, the film is rather pedestrian. We've seen an individual deal with unjust imprisonment and torture and Stewart does little to make his film stand out. With few exceptions (the lovely, impressionistic opening credit sequence which explains the film's title; Bahari reaching for the sunlight in a closed outdoor pen), the film is visually flat and, surprisingly, lacking in humor. Its most notable aspect is the performance of Danish actor Kim Bodnia ("Terribly Happy," "In a Better World"), who plays Bahari's conflicted interrogator. Bahari's family history is of note - his father was imprisoned under the Shah, followed by his sister Miriam ("The Patience Stone's" stunning Golshifteh Farahani) by Khomeini - but Stewart's attempt to insert these deceased characters into Maziar's prison cell is awkward. Dimitri Leonidas ("The Monuments Men") adds some life as taxi driver Davood who acts as Bahari's guide into the political climate of Tehran neighborhoods. The film also stars Shohreh Aghdashloo ("House of Sand and Fog") as Bahari's mother and Claire Foy ("Season of the Witch") as his wife. "Rosewater" isn't a bad film, it's merely an unexceptional one. Grade: