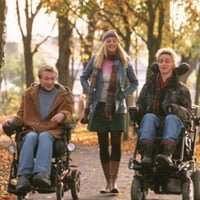 Michael Connolly (Steven Robertson, "The Race") has been lulled into accepting his existence at Dublin's Carrigmore because he's known nothing else since his mother died. The cerebral palsy sufferer is wheelchair bound and frustrated having to point to a letter chart in order to communicate until a fateful day brings a new arrival. A twenty year old punk immobilized by muscular dystrophy never leaves anyone doubting that "Rory O'Shea Was Here."

This audience award winner of the Edinburgh Film Festival has all the necessary ingredients for the type of heart-warming, comedic, inspirational, life-affirming tear-jerker that more discerning audiences should love to hate, but "Rory O'Shea," despite its cliches, is a cut above the mire due to lively performances from McAvoy and Garai in a brightly designed production. This one can be winning despite itself. Rory (James McAvoy, "Bright Young Things") shakes things up just with his uncharacteristic appearance, all spiky bleached locks, nose ring and tee-shirts with attitude. Eileen (Brenda Fricker), Carrigmore's supervisor, asks for a public introduction she immediately regrets when the young man cheerfully explains that he's only able to move two fingers of one hand, allowing him self-propulsion and self abuse. When he shows not the slightest hesitation understanding Michael's strangled words, he gains an adoring sidekick with greater physical ability than himself, handy when nurse Annie refuses to apply his styling gel. Rory's main goal is to win the right to independent living, but his rebelliousness registers as irresponsibility and the Ability Ireland board denies his application. Yet when Michael applies, emboldened after a humorous trip to a pub and disco engineered by Rory, he is accepted. Rory's next trick is to convince the lovely Siobhan (Romola Garai,"Dirty Dancing: Havana Nights") to quit her supermarket job to become their PA and the threesome's exit from Carrigmore looks like the stuff of legend. 'It can all end in tears' predicts a disapproving Eileen and she is right, but not for the reason she thinks. Director Damien O'Donnell heavily tips his hand early on with an exterior shot of the beautiful old red brick manor that is Carrigmore bearing a sign proclaiming itself to be 'A special home for special people,' in other words, a sanctimonious prison for those whose spirits yearn to fly. Screenwriter Jeffrey Caine works in that theme as well, with Rory's vehement rejection of Carrigmore's rules reflected as a later flash point when Siobhan dares utter the word. Other themes include fathers and rejection - Michael's dad Fergus is a prominent attorney who hasn't seen him since interring him at Carrigmore while Rory rejects his dad, a nice enough seeming bloke who stops by with Guinness and straws - and the law, something which Michael has a surprising aptitude for given his limited exposure to dad and something that Rory likes to break in order to feel 'alive.' Caine also wants to prove that Michael has a brain and besides the law he's also shown to be wily when he quotes back the independent rights board's own brochure to secure his grant, but then he's also conveniently simple-minded enough to think that he might romance Siobhan. McAvoy is an irritating live wire, a charming rogue whose only weapon is his mouth. The actor is most affecting in his subtle handling of Rory's desire for Siobhan. That we're never really sure if she realizes how strong his feelings are is an indication of Garai's skills as well. She's perfectly natural as a nice girl trying to cope with a job that she's not qualified for in the midst of emotional land mines. While she doesn't seem to realize the irony of playing Johnny Cash's cover of NIN's "Hurt" for Rory, she gives us a glimmer of feelings for a boy whose baggage she's just not capable of coping with. It's Robertson who hammers the material back down to its level, substituting puppy dog eyes and mouth twisting for a performance. He makes Michael a cutesy handicapped caricature. "Rory O'Shea Was Here" tips off its ending in its title, and of course, everyone realizes the value of a life well lived once its gone, even if it bugged the heck out of them at the time. On the other hand, the life that goes out of the film in its final scenes confirms the lack of McAvoy's spirited presence.