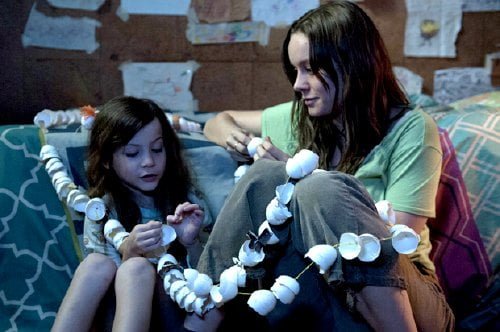 In a 10 x 10 foot space with no windows save an overhead skylight, a mother (Brie Larson, "Short Term 12") and her just turned 5 year-old Jack (Jacob Tremblay, "Smurfs 2") spend their days cooking and cleaning, reading, watching TV, tending a plant and making crafts in appointed spots with a mid day break for screaming as loud as they can. Provisions are supplied grudgingly by Old Nick (Sean Bridgers, "The Woman," TV's 'Rectify'), whose appearance occasions Jack's retreat to Wardrobe where he will neither see nor be seen. This has been Jack's whole world since his birth, but his ma has made a decision to get him out of "Room."

Emma Donoghue has adapted her own extraordinary novel (inspired by the Elisabeth Fritzl case), stripping it down while retaining its essence for director Lenny Abrahamson, whose last film, "Frank," featured Michael Fassbender encased in a giant papier-mâché head. Abrahamson has achieved a startling sense of space and its relationship to the imagination, aided in no small part by Ethan Tobman's ("The D Train") production design and the performances of his two leads. The horror of Ma and Jack's situation seeps in through telling details like the lack of health care resulting in Ma's painful, bad tooth; the unenclosed toilet sitting against a wall; the sounds that filter into Wardrobe when Old Nick visits or Jack's difficulty in grasping the concept of a world outside Room. That's because it is Jack whose point of view guides the film, as it did the book, and Jack's quite happy with his world. But in adapting the book for a movie, this perspective mutes the material, not allowing the full horror of the situation in. Instead, no matter how successfully achieved, we're experiencing the imagination of a child. Larson is superb balancing unconditional maternal love with the frustration of dealing with a small child who just doesn't understand anything about their situation. When she sinks into depression, Jack treats her retreat beneath rumpled bedding as an occasional, recurring hiccup. When she occasionally snaps, she immediately empathizes with her son, enveloping him in love. It is no surprise then, that Jack tries to reject her description of an outside world where he and Ma are not the center of all things and when Ma concocts her escape plan, Jack isn't the most willing participant, not understanding what is at stake. The midsection, where Ma's plot is set into action, is brilliantly achieved. The moment Ma realizes she's succeeded, perhaps never to see her son again, is Larson's silent, emotional aria. There's the brief burst of outdoors, not seen in seven years, then we're off with Jack, terrified by sky and movement, rolled up in a rug in the back of a pickup truck. When circumstance favors him, Jack cannot express himself to Officer Parker (Amanda Brugel, "Maps to the Stars," TV's 'Orphan Black'), but her (perhaps too) brilliant deductive reasoning zeroes in on Room. The second half of the film is given over to the difficulties faced by the media-plagued survivor and her child. As Ma's mother, Nancy, Joan Allen ("The Upside of Anger," "The Bourne Ultimatum") adds layers not found on the page as she quietly attempts to pull her daughter back into a much changed world while getting to know a grandson. Ma's parents are now divorced, presumably over the stain of her disappearance, her father Robert (William H. Macy, "Fargo," Showtime's 'Shameless') unable to accept Jack. Nancy's laid back live-in partner Leo (Tom McCamus, "The Sweet Hereafter," TV's 'Orphan Black') is his opposite in every way. There are many obstacles to overcome, including the financial ones which lead Ma to agree to a television interview, but a staggeringly insensitive question from her interviewer (Wendy Crewson, "The Vow," "Antiviral") leads towards Ma to a dark place. Meanwhile, Jack adapts (Abrahamson has guided young Tremblay into a terrific performance, the young child almost feral in speech and movement gradually overcoming fear with awe and acceptance). The film is visually inventive, Room's small space alternately opened up and cramped due to the ingenious design accomplished by Tobman and cinematographer Danny Cohen ("The King's Speech"). What is dark and dirty in the film's first half turns to the open sky and antiseptic white of a high floor hospital room, a burrow replaced with aerie. But emotionally, the film never soars to the heights it might have. There is a reverence here that needed some shaking up, like Ma's continued breast feeding of her son, an excision only vaguely alluded to. On the page, we can fill in the gaps with our own imagination, but "Room" is content to offer us Jack's while Ma's endured horrors remain confined in words. Grade: