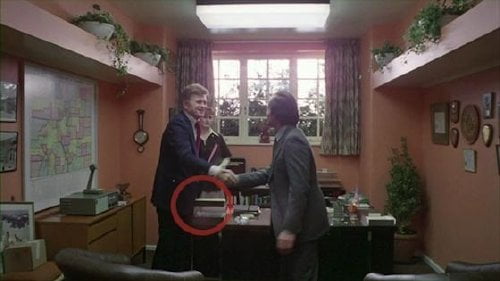 Back in 1980, when it was just released, many Kubrick fans dismissed "The Shining" as a lesser work, a genre exercise from a filmmaker who usually had higher aspirations. But there was something about it that kept coming back to haunt them. Director Rodney Ascher talks to five obsessives who theorize it can be read as a film about the slaughter of Native Americans to WWII and the holocaust to Kubrick's admission of faking the Apollo 11 moon landing footage in "Room 237."

This documentary will entertain everyone from film junkies to conspiracy theorists and those who like to debunk them as Ascher spreads his net to include everything from the most provocative ideas to blatant bunkum. He talks to five people, all but one of whom offer overall theories, yet Ascher constructs his film in nine chapters and the documentary itself is often raggedy, longish segments followed by non sequiturs, unidentified bits of (non Kubrickian) film footage, voice overs from speakers we often must guess at and a faux audience in a faux theater that adds little to the experience. Ascher also fails to find anyone to offer a perspective on the perspectives. This one's more about content than form, which frequently takes the kitchen sink approach. Bill Blakemore, a war correspondent, saw the film's tag line '“The Wave of Terror That Swept Across America' and connected it to the white settlers who swept from the east coast towards the west with axes which cleared not only forests, but native American Indians. He points out the container of Calumet baking powder featured prominently in the Overlook Hotel's food storage pantry, the meaning of the word and the fact that the cans are seen later with the brand name not fully visible. Along the way Ascher throws in that old anti-littering PSA which featured a Native American Indian. Juli Kearns, a playwright, is at first fascinated by the large window in Stuart Ullmann's office, then jumps for joy when she notices that a poster of a skier to the left of the twin girls in the play room is 'really' a Minotaur (Kubrick's "Killer's Kiss" was released via Minotaur Productions), linked to a picture of a cowboy riding a bucking bronco on the right which strengthens her theory. In Greek mythology, Minos was held in a labyrinth. The maze in Kubrick's movie was not in King's novel. But she reaches too far talking about the synchronicity of her analyzing the image of a man with a split skull in the film when her 9 year-old came to her with a story about a lightning bolt that gave him a splitting headache (and the filmmaker indulges with an animation). Still, her mapping of the Overlook's impossible architecture has perhaps the strongest merit of any of the theories proffered. Jay Weidener is a filmmaker and conspiracy theorist who credits "2001" with inspiring his course in life. He's positive that he has proved that the Apollo 11 moon landing was faked by Kubrick because some Hollywood front screen projection specialists have agreed with him and he thinks "The Shining" is Stanley's apology to his wife for having done it. The fact that the key extending from Room 237 is labelled ROOM No. 237 means it's the Moon Room, of course, because of which letters are capitalized. Still one must admit that the juxtaposition of that hexagonal carpet Danny plays on in his Apollo 11 sweater with an aerial view of its launching pad does is awfully startling. Geoffrey Cocks, a historian specializing in Nazi Germany, thinks the movie is about the holocaust. He cites the German Adler typewriter Jack is using (and which changes color during the film) as well as the numerous appearances of the number 42 (on Danny's shirt, the movie seen "Summer of '42," the number of vehicles in the Overlook's parking lot) but goes too far with his explanation that 2 x 3 x 7 = 42. Well only if you multiply backwards. John Fell Ryan writes KDK12, an ongoing analysis of the film. Now here are some interesting observations, such as the fact that Jack is reading a Playboy in the lobby before his interview and the TV Wendy and Danny watch has no cord. He also had the idea of projecting the film both frontwards and backwards, the images superimposed over each other and finds some bizarre compositions. Then again, this would probably happen with just about any film one did this with, especially in the horror genre. Kubrick may have had a 200 IQ, but did he really, even subconsciously, play both ends against the middle? (There is another ongoing analysis of "The Shining" by MSTRMND, who is mentioned here, but who did not agree to be interviewed. I'd read his stuff before seeing this documentary, and, frankly, find his content far more detailed, complex and intriguing - see http://www.mstrmnd.com/log/802 - scroll past any html errors that appear at the top of the page.) Once these five subjects are introduced, they're not identified in subsequent voice overs, which can get a bit confusing, especially as Ascher inserts bizarrely random thoughts and ideas amidst his nine chapters. In fact, one whole chapter is just about a random, throwaway idea as it focuses on minor character Bill Watson just enough to get us interested without ever drawing any real conclusions. "Shining" enthusiasts are sure to find many things to delight over (that carpet in Room 237!) and perhaps the best thing to come out of "Room 237" will be a renewed interest in the Kubrick film (forget the book - one theorists says Kubrick purposely trounced King by replacing the book's red VW with a yellow one, then showing a red one smashed under a semi). Ascher goes out with a stunt of his own - his film's credits run bottom to top instead of top to bottom.