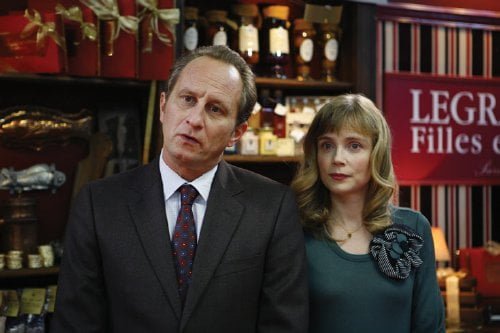 Angélique Delange (Isabelle Carré, "Private Fears in Public Places") loves chocolate, but is so timid she freezes when she catches the admiring attention of Le président du jury du salon du chocolat (Philippe Laudenbach, "Of Gods and Men") at test time. She becomes legendary as 'the hermit' who creates the confections for Mercier Chocolates, but when M. Mercier (Claude Aufaure) dies, she must venture into a job interview. The owner of Old Mill Chocolates, Jean-René Van Den Hugde (Benoît Poelvoorde, "Coco Before Chanel"), has a reputation for being 'mean,' but it is only because he is as socially inept as she is. Angélique is thrilled to be hired by him, then doesn't have the gumption to tell him she didn't realize she was to be a sales rep for the struggling company. Back in group therapy, she's given an idea by her fellow "Romantics Anonymous."

Cowriter (with Philippe Blasband, "Nathalie...")/director Jean-Pierre Améris hooks is romantic comedy on matching two individuals in therapy for afraid of being noticed noticing each other, and while it is artificially sweet, most of the gags work and the message, that you have to get over your fears in order to find love, is true for most. Not everything works, particularly Améris's insistence on framing his leading lady into a couple of out of character 'bits,' but the film also has laugh out loud moments, punctuated by the wonderful timing of editor Philippe Bourgueil. The film's opening volleys allow us to meet both protagonists individually, their therapy sessions providing back story, with their crossover meet in the middle. Angélique sits in a circle of people who are 'emotional.' Mimi can's speak for crying and Adèle cannot say no. Angélique tries to contribute, but passes out in front of her audience. When she enters Van Den Hugde's office, two statements about chocolate are all he needs to declare that 'She's the one!,' a choice of phrase more appropriate for a love match than his first in a line of candidates. His female employees, Magda (Lorella Cravotta) and Suzanne (Lise Lamétrie), are clearly not used to this behavior. When he meets with his psychoanalyst (Stéphan Wojtowicz), all he can talk about is his new employee. He's told he needs to ask someone to dinner. Meanwhile Angélique is panicking once she's discovered she won't be making chocolates, but selling them to vendors. She does an artful sales presentation to her group as she explains why she cannot do the job. She's determined to tell her new boss about the misunderstanding, but she loses her resolve when he asks her to dinner. In the field, she remains artlessly loyal with vendors who do not want her product. It is not until the last regular customer, Madame Legrand (Marie-Christine Demarest), uses the word obsolete, that Angélique concocts her master stroke. In the interim, she and Jean-René dance around their desires. Améris knows how to stage lengthy scenes with gradual build up. The couple's dinner, which involves Jean-René repeatedly leaving the table to change his shirt, keeps upping the ante. Later, when the duo go to a chocolate convention and mistakenly get one room at a hotel, the all night avoidance gets more and more amusing before being capped off with a one-two punch. There's nothing very deep about either character and the actors don't have much in the way of chemistry, but the script's gift of shared affliction matches them well and by the time the director delivers his final, unexpected punch line, they belong together. Chocolate lovers will enjoy the creative experimentation with such ingredients as mint, porcini, paprika and green tea, but if the aphrodisiacal sweets are organic to the film, Angélique clicking her heels after a kiss or doing a musical number on the job are not. By the time Poelvoorde gets up to sing, Améris has recovered and worked the serenade into the plot. A non sequitur of a scene where Angélique finds her mother with a much younger lover in her apartment should have been excised and as enjoyable as his last gotcha is, it doesn't dovetail with the psychology of an earlier scene when the two finally come together. Despite these issues and the artificiality which glosses the film, "Romantics Anonymous" is a sweet little confection with real rooting interest for the couple at its heart.