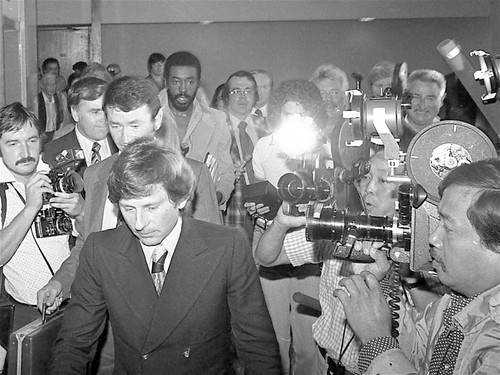 It is hard to believe that it has been over 30 years since controversial filmmaker Roman Polanski fled the US after his arrest for a sex and drugs scandal involving 13-year old Samantha Gailey. His 1977 flight from justice has exiled the man from the United States ever since. A great debate has raged for years over Polanski’s guilt or innocence. Veteran documakers Marina Zenovich brings the details of the year-long dispute that ended in Roman’s escape to our attention with the intriguing documentary, “Roman Polanski: Wanted and Desired.”

"Nightcrawler" writer/director Dan Gilroy's second film is guilty of narrative muddle, but it is still well worth seeing for Denzel Washington's brilliant character study, a performance unlike anything we've seen from the actor before. He's clearly on the autism spectrum, a law savant whose research skills were relied upon by the partner who appeared in court but whose social skills can make him a liability, a man twenty years behind the times in personal style. He's also a champion of the downtrodden, his own race giving him experience into the injustices suffered by others. After informing him of William's heart attack, office admin Vernita Wells (Lynda Gravátt) instructs Roman to get continuances for his cases. Instead, Roman tries to intervene and things do not go well. He's found in contempt of court at one pre-trial hearing and so insults a prosecutor bargaining on a plea deal, she shuts him down. That client, who had the name and location of the crime's real perpetrator, is killed in prison. By this time, Roman's found an unlikely savior in Pierce, but the man with the ill fitting suits and awkward body language manages to insult Pierce's right-hand man on his first day. Then George learns that Roman never presented that prosecutor's deal to their client, jeopardizing their firm. George is ruthless in his dressing down of Roman, who then gets mugged on his way home. The incident spurs Roman into a criminal act of his own - he anonymously collects $100K in reward money by using his dead client's information. The next day, he purchases a luxury apartment, a new suit and treats himself to turkey bacon donuts on Santa Monica's beach. Gilroy's created a fascinating protagonist brought to life by Washington with the body language of an awkward, shuffling adolescent who talks to himself beneath his breath. But the plot he's constructed around him, while full of intriguing ideas, never really gels. Pierce, for example, defined by Farrell as a slick corporate lawyer with his eye on his profit margins, suddenly anoints Israel as his firm's moral compass, building a new pro bono department around the man. His interest in Israel's enormous suitcase, which holds the man's years of work towards leveling the legal playing field for hardscrabble cases, only goes so far in explaining this radical change of heart. Roman's also given a love interest in Maya (Carmen Ejogo, "Selma"), an activist who brings him in to mentor her troops on the legalities of protest demonstrations, a talk he fumbles with his old-fashioned sensibilities. Ejogo's lovely in the role, a reflection of Roman's prior life as he steps into his new one, but their sweet connection trails off into the film's misguided conclusion. The production is fine, Roman's apartment building abutting a new development signifying his place in life, the ceramic bulldog inherited from his partner both a guiding angel and ball and chain. Gilroy may not have gotten control of his disjointed narrative, but his star is something to see. Grade:

This is both a film for documentary fans and for the film industry buffs who want to get the definitive word on why Polanski flew the coop so many years ago. Zenovich delivers an in depth look beneath the scandal into the jaded workings of presiding judge Lawrence J. Rittenband, the man some think responsible for forcing Polanski to flee the country. The documaker gathered up copious archival footage from the media frenzy, at the time, for things Polanski, showing, also, the bottom dwelling ways of the paparazzi. Modern day interviews with the attorneys, friends and, especially, with Samantha Gailey are nicely edited with the archival footage. Polanski remains taciturn and is only seen and heard via the archive material. “Wanted and Desired” simply lays out the information, pro and con, about the scandal, the charges, trial and escape and lets you decide whether Roman Polanski was treated fairly, or not. This well-constructed, thought-provoking work that, like the many excellent docs released in 2008, deserves viewing.