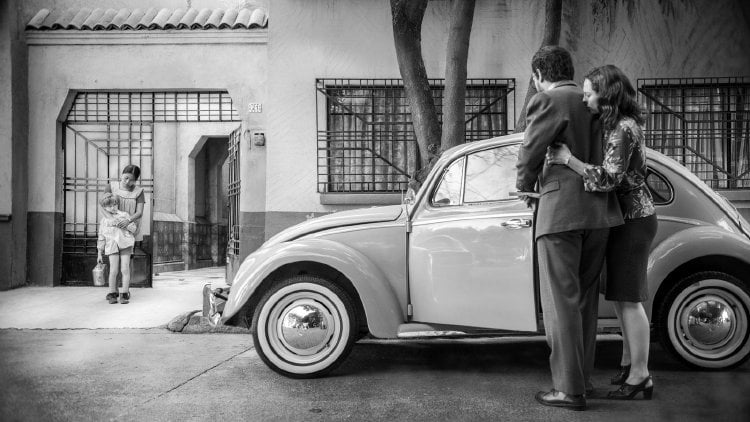 Cleo (Yalitza Aparicio) is the faithful maid, and surrogate mother, for Sofia (Marina de Tavira), Antonio (Fernando Grediaga) and their four kids. But, the marriage is in trouble and Cleo, after a passing romance, learns she is pregnant. With Antonio “away on a medical conference,” the little family must join together to stay together in “Roma”

As a young boy in 1970, writer/producer/director/cinematographer/editor Alfonso Cuarón ("Gravity") witnessed the dissolution of his parents' marriage during tumultuous times in Mexico City. He was mainly brought up by Cleo (Yalitza Aparicio), one of two maids who worked for his middle class family in the neighborhood called "Roma." Cuarón returns to his native country for the first time since his 2001 breakout "Y Tu Mamá También" and his long gestating passion project proves nothing short of breathtaking. The film is reminiscent of Italian neorealism, yet Cuarón's shimmering black and white deep focus camerawork sets it apart (the director took over duties from his long time cinematographer Emmanuel Lubezki due to scheduling conflicts). Watching "Roma" is like having someone else's memories transferred into your brain, so acute is the sensation of nostalgia, so specific are these sights and sounds where the simplest things can have as much power as dramatic events. Opening on the sudsy water being swept across a tiled courtyard, an airplane in the sky reflected in a settled pool, Cuarón emphasizes both Cleo's daily toil and the sense of something left behind. Borras the dog appears to spend his life here, every arrival and departure a challenge to keep him in, his excrement a flashpoint for weightier issues. Yet Borras is also a source of joy as he bounds high into the air to greet family members. The household is chaotic in the morning, Cleo both attending to breakfast and gently wakening children. With most departed for work or school, Cleo climbs up to the roof, revealing an entire unseen neighborhood of women hanging laundry high above the city. But as the day closes, we get our first hint of trouble brewing, Sr. Antonio (Fernando Grediaga) complaining to Sra. Sofía (Marina de Tavira) about the messiness of the house within Cleo's earshot. A three week Canadian conference is announced to the four children, but Sofia's goodbye embrace suggests desperation. Cuarón pays homage to these two women's struggles throughout his film, a recognition of how their sacrifices shaped his life. At the beginning of the film, they are employer and employee, albeit ones of familial familiarity. But as the men in their lives dole out pain and hardship, they become something more, a sisterhood of maternal care and survival. The filmmaker spoke at length with Cleo's real life counterpart Libo, learning about the private life hidden from him as a child and so we see a young woman venturing out with her coworker Adela (Nancy García García, Aparicio's real life friend) on a double date with Adela's boyfriend Ramón (José Manuel Guerrero Mendoza) and his handsome cousin Fermín (Jorge Antonio Guerrero). But when, later, Cleo realizes she is pregnant and shares the news, she is treated to kind, supportive words and abandonment at a movie theater. Sofia steps right in, bringing the woman to her own doctor while seeking news of her husband from his medical colleague. "Roma," though, isn't driven so much by plot as by moments and they will stay with you. There is the anxiety of parking the family car in that tight squeeze of a courtyard, something Antonio can accomplish but which Sofia fails at miserably (this will be echoed by a hilarious moment in traffic as she misjudges the space between two trucks). We get a tour of a festive downtown as a backdrop to Cleo's race to find Toño (Diego Cortina Autrey), wandered off on a family outing, doing a double take as Antonio rushes by with another woman (decrying Sofia's story of his extended business trip). The first holiday without dad is spent at a rural relative's in a home where the family's long line of dogs have their heads mounted on a wall and full size taxidermied deer grace the living room. A chaotic shooting party emphasizes the class divide, as does Sofia's New Year's Eve fending off unwanted attentions while Cleo's champagne toast is dashed from her hand in the basement below. A trip with Sofia's mother, Sra. Teresa (Verónica García), to a downtown furniture store gives them a bird's eye view of the Corpus Christi Massacre, the CIA trained los Halcones barging in to shoot a student before their eyes. Fermín, wearing a 'Love Is...' t-shirt, is one of them. This is the type of film where an earthquake is almost incidental, but where the application of vinegar on a sunburn is memorable. The film's climax is another family trip, two women and four children, two of them saved in an incredible moment of bravery by the adult who is not their mother. Yalitza Aparicio, a pre-school teacher found in a casting call, grounds the whole film with her calm response to all manner of events, breaking down only twice in the face of her own, personal tragedies. We see things through her eyes, her station in life necessarily deeming her character somewhat passive compared to experienced actress Marina de Tavira, extraordinary as she plunges forward as stresses mount, shielding her children from her own crises. The production is stunning, an entire neighborhood retrofitted to the 1970s, the home at its heart dressed almost entirely with items from Cuarón's childhood. Sound design is immaculate. Mexican rocker Javier Batiz’s cover of “House of the Rising Sun” adds foreboding to Cleo's trip to the city's outskirts to find Fermín. Cuarón has been Oscar nominated in multiple categories for three films, winning for one, but with "Roma," he has delivered his masterpiece. Grade: