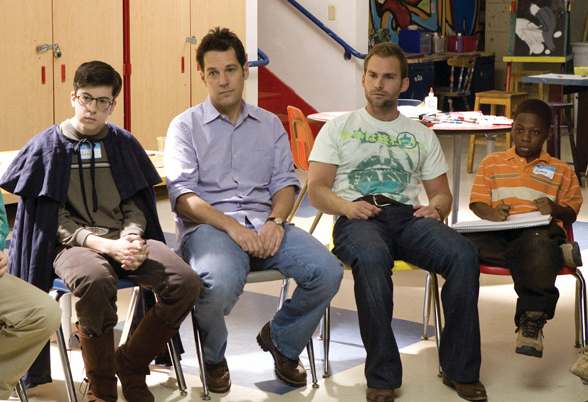 Star Rudd gets his first screenplay credit with his "Wet Hot American Summer" and "The Ten" collaborator director David Wain in this Judd Apatow-styled raunch mixed with sweet comedy that's been hyping itself as this year's "Superbad." While it's not even close to that anarchistic yet knowing buddy flick, "Role Models" should please its target audience. Danny, who has lost any joy in life, and his self-proclaimed friend, horndog partier Wheeler, find themselves signed up with Sturdy Wings, a type of Big Brother/Big Sister organization run by former addict Gayle Sweeny (Jane Lynch, "The 40-Year Old Virgin," "The Rocker"), a woman who uses her past aggressively, to say the least. She saddles the duo with two of her hardest luck cases. Danny gets assigned to her oldest 'Little,' Augie Farks (Christopher Mintz-Plasse, "Superbad's" McLovin'), a nerd who has totally withdrawn into the fantasy land of his role-playing game Laire. Wheeler's the 'Big" to Ronnie Shields (Bobb'e J. Thompson, "Fred Claus"), a pint-sized foul-mouthed kid who's gone through eight volunteers in eight days. Danny and Augie only find commonality in their equal desire to be free of each other, but after a day of abuse, Wheeler connects with Ronnie via raunchy sex talk and rock n' roll. Both, of course, mess up badly and both redeem themselves, Danny doubly so as he wins back Beth. But like its lead characters, the film is bipolar. Once Danny and Wheeler are assigned their charges, the film splits in two. Danny sulks through Augie's role playing games, becoming moved to action when Laire's King Argotron (Ken Jeong, "Knocked Up") unfairly throws Augie out. Wheeler teaches Ronnie the art of eyeing boobies, but follows his own muse to the detriment of responsibility. Danny really rises to the occasion after witnessing Augie's treatment by his mother (Kerri Kenney-Silver, TV's "Reno 911!," "The Ten") and her boyfriend (Ken Marino, "The Ten"), who push the kid to fit in over supporting his interests. Ronnie's parental background makes no sense, as his loving and devoted mom Karen (Nicole Randall Johnson, "In Her Shoes") and the home she provides offer no foundation for his aggressive acting out. The whole comes together on the battlefield, Danny and Wheeler reunited through Augie's bid for redemption and Wheeler's love of Kiss. "Role Models" finds its humor in excess, the best of it from supporting players. Jane Lynch is at her most inspired as the do-gooder both warped by and excessively proud of her drug snorting wanton ways - she flaunts her former cocaine habit like a battle scar and gets juvenile yet creepy with her bagel dogs. Also good is Matt Walsh ("Be Kind Rewind," "Semi-Pro") as Augie's adult idol, Laire's Davith of Glencracken, the epitome of a Renaissance Faire player. Thompson has the benefit of the shock value of R-rated dialogue coming from the mouth of a small black kid, but he also spikes it with conviction. Mintz-Plasse is more teenage outcast, but has a little fun with medieval sexual innuendo. We've seen the hangdog husband and hellacious horndog from Rudd and Scott before and they play their types as expected. Poor Elizabeth Banks is stuck playing the responsible adult. "Role Models" is rarely laugh out loud funny, nor does it aim as high as "Superbad" in its buddy bonding insights, but it's amiably inappropriate and good for a few smiles and chuckles.