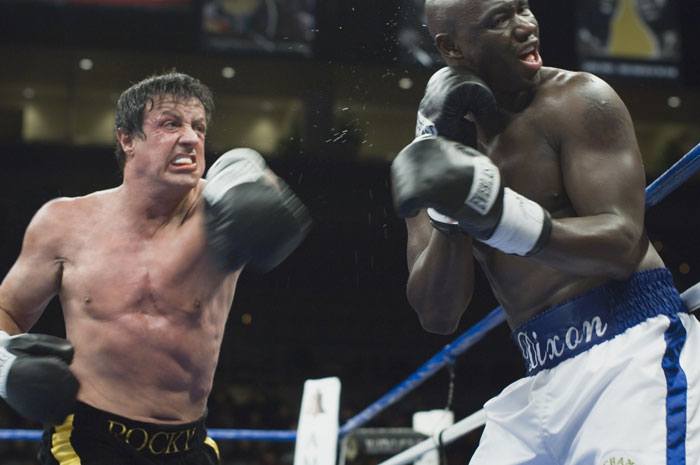 Thirty years after being plucked out of obscurity to become the phenomenon known as 'The Italian Stallion,' the world's former heavyweight champ is living humbly in South Philly, running a restaurant and mourning his beloved wife Adrian. But a computer simulation that pits his younger self against current champ Mason 'The Line' Dixon (three time light heavyweight champion Antonio Tarver) sparks the minds of promoters and fires the will of old fighter "Rocky Balboa."

Writer/director Sylvester Stallone returns to the character that made him a star with such renewed insight and affection that "Rocky's" subsequent sequels may be all but forgotten. Shadow-boxing his original film in every respect without ever cannibalizing it, Stallone's "Rocky Balboa" is a joyous thing. This is one old underdog that still has a new trick or two left in him. The film begins with Rock feeding Cuff and Link (the same actual turtles from the original film) and the birds outside of his South Philly row house and visiting all the places he romanced Adrian on the anniversary of her death (from 'the woman's cancer'). His son, Rocky Jr. (Milo Ventimiglia, TV's "The Gilmore Girls" and "Heroes"), avoids his famous dad with excuses about the accounting job with which he's tried to mold himself. Paulie (Burt Young) tries to snap his old friend out of his memories, but when Rocky leaves him, he wanders into an old neighborhood bar he used to frequent. The bartender there recognizes him. It's Marie (Geraldine Hughes, "Duplex"), the young girl he once walked home only to be told "Screw you, Creepo." Marie is a single mother living in a bad part of town and Rocky takes an interest in her and her son, Steps (James Francis Kelly III). As in the original, one of the champ's entourage calls his attention to a local broadcast highlighting Rocky's prowess, Paulie gets his crude, drunken rant when he loses his job (he joins Marie at Rocky's restaurant, Adrian's, where Rocky entertains his customers with old glory stories and Spider Rico (Pedro Lovell, "Rocky") eats for free) and the Champ insults Rocky at a press conference. And as in the original, Stallone takes his time building his characters, holding that training montage (yes he pounds the meat AND runs up the steps of the Philadelphia Art Museum, this time in the snow with new dog, Punchy) until just before the HBO exhibition fight at the Mandalay Bay in Vegas. But everything is seen from a new perspective by this sadder, older, wiser Rocky and the film has every bit as much heart as the first time around. If the younger man was all about 'going the distance,' thirty years later it's about how much of life's beating you can take and still move forward. Stallone's screenplay has been meticulously crafted to give us back the character with his dignity intact. His dialogue is terrific, all unsophisticated Rockyisms and South Philly (reminiscing to Marie about his old fight club - 'They used to call it the Bucket of Blood. Man I took some massive beatings down there, but it was nice.') Two speeches Rocky gives, one to the boxing commission that denies his license, the other to his son, are nicely written and truthfully delivered. Ghostly superimpositions of Adrian drift towards the heavy handed and yet Stallone does a beautiful job keeping her spirit hovering around his character while gently introducing a new romantic interest, wonderfully played in low keys by Hughes. Ventimiglia and Tarver both give bland performances, but Rocky's son is supposed to be living in his father's shadow and the Champ is unpopular with fight fans because he had no real obstacles winning his title, giving each a partial pass. Tony Burton, the only actor besides Stallone, Shire and Young to appear in all previous "Rocky" films, provides another familiar face as Rocky's corner man. The only laughable aspect of "Rocky Balboa" is that Stallone would have us believe that Paulie's turned into an impressionistic painter (and a good one at that). The sixty year old star is in amazing shape and the final ten round match is rousing and realistic (Stallone insisted that Tarver really land his punches). And while "Rocky Balboa" doesn't give us a new theme, it reuses the old ones ("Gonna Fly Now") well and brings a smile with Frank Sinatra's "High Hopes." I don't care if I'm wearing my heart on my sleeve with this one. There's something about Rocky that makes me a softy and with "Rocky Balboa," Sylvester Stallone will "Take You Back" to that same old glow you felt back in 1976. Along with Jackie Earle Haley ("All the King's Men," "Little Children"), it's the comeback story of the year.