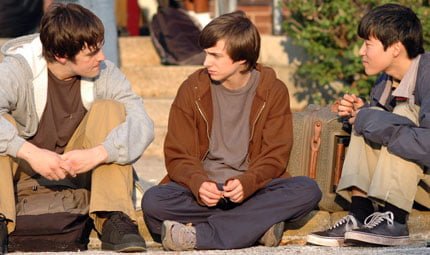 Stuttering, pushed around Hal Hefner (Reece Daniel Thompson, "Dreamcatcher," "The Sandlot 2") is one of Plainsboro High's background characters until one day he is amazed when articulate star debater Ginny Ryerson (Anna Kendrick, "Camp") approaches him to take an open spot on the team. Ginny says she sees potential in the boy whose brightness is covered by his stutter and Hal comes to discover that life and love are not really "Rocket Science."

Writer/director Jeffrey Blitz ("Spellbound") makes his feature debut with this Sundance '07 favorite that had people comparing it to "Rushmore." Imagine, then, my disappointment to find a slight coming of age tale with some natural moments, yes, but also with obvious humor (when there is any), racist undertones, and an underwhelming lead. "Rocket Science" never made me crack a smile. The film sets up former Plainsboro debater Ben Wekselbaum (Nicholas D'Agosto, "Election") as a legend who ultimately cracked under pressure and left school to work in a downtown Trenton dry cleaner. His partner, and we learn, obsessed admirer, was Ginny, now positioned to be the school's star. Her recruitment of Hal is odd at best, but she begins a program with him to ace the year's topic (should sex education be taught in schools). However, once Hal has a turn at bat and stumbles miserably, Ginny shuns him completely. I must admit, I never saw her diabolical plan coming, but while Hal's rebuttal employs some cunning and gives evidence to his pluck, it's never really all that believable. Blitz's script relies on some dubious sources of humor such as references to unattractive middle-aged parents having randy sex, Hal's mom's new nerdy Korean boyfriend and his weird gay son and a peeping teen who parades around in bras and relates his Kama Sutran experience with the family dog (which maybe could have been funny in other hands, but is offputting here). Thompson, as the obviously named Hal Hefner, gives a wan portrayal that doesn't really inspire much sympathy. His big romantic gesture - throwing a cello through the Ryerson's window - plays like a failed attempt to emulate Cusack's pivotal boom box moment. I found little of interest in older brother Earl's (Vincent Piazza, "Stephanie Daley") torture of his bro and mom Juliet (Lisbeth Bartlett, "The Good Thief") is, frankly, kind of gross. At least banished dad (Denis O'Hare, "Half Nelson," "A Mighty Heart") gets a bit of late inning bonding and as mom's new romantic interest, Judge Pete, Steve Park ("Fargo") makes you wish for better things for him. D'Agosto exudes a lot of charm in his somewhat fantastical character, but the film's best portrayal comes from Anna Kendrick as the conniving Ginny, her controlled and seemingly focused surface masking roiling ambition and hurt. "Superbad's" Jonah Hill has a small part as a philosophy champion. "Rocket Science" has some moments of note, but the film never establishes its own clear personality. It's a bit of a misfire.