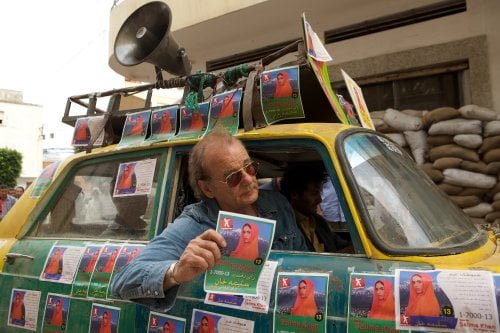 Richie Lanz (Bill Murray) claims he was once the concert manager for the kings and queens of rock and roll. Recent years have been hard for the down-on-his-luck music shill, forcing him to take his latest client, Ronnie (Zooey Deschanel) on tour – in Afghanistan! When thing go badly wrong with Richie’s plans, a chance encounter with a pretty Afghan teenage girl with a beautiful voice offers him the chance to get back on top once again and “Rock the Kasbah.”

In 2009, "Afghan Star," a documentary about Afghanistan's version of 'American Idol,' won two awards at Sundance for its riveting look at a contest that both united a country and drew severe religious criticisms for allowing women a voice, something that used to be the norm before the rise of the Taliban. The idea has been fictionalized by Mitch Glazer ("Scrooged," "The Recruit") as a vehicle for Bill Murray as 'legend-in-his-own-mind' rock promoter Richie Lanz, whose last ditch effort with his only client Ronnie (Zooey Deschanel) is to book her into a USO tour. When she hightails it with his passport and his cash, he falls in with such American 'entrepreneurs' as arms dealers Nick (Danny McBride) and Jake (Scott Caan), mercenary Bombay Brian (Bruce Willis) and Merci (Kate Hudson), a prostitute on her farewell retirement tour who partners up with Richie to make Pashtun singer Salima (Leem Lubany, "Omar") the winner of Afghan Star despite her father Tariq's (Fahim Fazli) death threats. The film, directed by Barry Levinson ("Avalon," "Bugsy"), is a haphazard mess with little regard for logic or plotting. This is for Bill Murray completists only, although it should fire up casting agents to give the stunning Kate Hudson, who's basically riffing on her Penny Lane role, better choices (she also rose above the material in Zach Braff's "Wish I Was Here"). Deschanel is done no favors and Willis has been employed to hang around in scenes. Bill Murray does his patented schtick, yet fails to find much funny outside of his own persona - one must be a seriously invested viewer to find a chuckle here. "Rock the Kasbah" doesn't so much come to a conclusion as simply end. This is the third film this fall derived from a documentary that failed to live up to its source, but it is the first that may deep six the concept altogether. Grade:

A Bill Murray film about a burnt out rock manager who tries to get back his once-glorious career by entertaining American troops in Afghanistan has to be funny, right? In the case of “Rock the Kasbah,” the answer is, unfortunately, “no.” The screenplay, by Mitch Glazer, feels like a collection of often unrelated vignettes strung together, relying on Murray to be the glue that binds them together. The comic star tries hard with his patented shtick but he is not nearly enough to give the Barry Levinson film the boost it so desperately needs. Given the supporting cast – Bruce Willis as a trigger-happy merc, Danny McBride and Scott Caan as a pair of unscrupulous arms dealers, Zooey Deschanel as Richie’s client who abandons him and Kate Hudson as an entrepreneurial prostitute (the best thing in the movie) – there should be more substance and genuine humor. I went into “Rock the Kasbah” with very high expectations but these were dashed a scant 100 minutes later. I wanted to laugh hardily but I hardly cracked a smile and definitely did not have my Kasbah rocked.