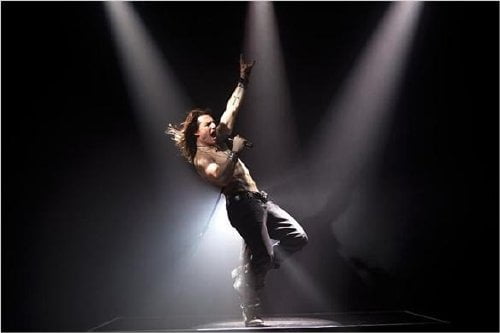 No sooner has aspiring singer Sherrie Christian (Julianne Hough, "Burlesque," "Footloose") stepped off the bus from Oklahoma onto Sunset Strip than she's robbed of her precious rock albums. Bourbon Room bartender Drew Boley (Diego Boneta, TV's '90210') steps in, and while he can't catch the thief he does get her a job with owner Dennis Dupree (Alec Baldwin) on the eve of the Bourbon Room's hosting of rock group Arsenal's last gig before lead singer, rock god Stacee Jaxx (Tom Cruise), goes solo in "Rock of Ages."

While the movie is occasionally enjoyable cheese and Tom Cruise quite riveting, "Rock of Ages" is a musical with a hollow center. The story's (written by Justin Theroux ("Tropic Thunder"), Allan Loeb ("The Dilemma") and the musical's Chris D'Arienzo) very raison d'etre is suspect - how does a musical which appears on the surface to be about the late 80's metal scene end up as a bunch of cheesy rock ballad covers? (And on a lesser level, how do screenwriters make a fictional piece of professional writing - a Rolling Stone article on Jaxx - sound so laughable?) Hough was just fine in the "Footloose" remake, but she doesn't have the heft to hold up a musical that actually requires her to sing and the dancing star is weak on a stripper pole. Boneta may look the part and can milk a laugh from a Journey lyric, but there is little else there but a willingness to appear foolish as part two of his plotline requires. There are four story lines at work, yet everything seems generic. The young lovers are split at a high point only to find themselves travelling low roads. The out-of-control yet legendary Stacee needs to redeem himself with the love and honest eye-opening of Rolling Stone reporter Constance Sack (Malin Akerman, "Watchmen"). The Bourbon Room owner (Baldwin) needs to save his club (one of a few shades of "Burlesque") and the Mayor's (Bryan Cranston, AMC's 'Breaking Bad,' in a thankless role) wife Patricia Whitmore (Catherine Zeta-Jones, "Chicago") is seeking personal revenge cloaked as a Christian Right campaign. Russell Brand is always at the Bourbon Room and although I could never figure out what his role was a late scene shared with Baldwin, both in bad wigs, must be seen to be believed. Paul Giamatti ("Win Win," "The Ides of March") is Stacee's sleazy agent Paul who also figures in Drew's tale and the film's only pair of truly powerful pipes belong to Mary J. Blige as Sherrie's dispenser of conflicting advice and owner of the Venus Club for Gentlemen. Broadway's Drew, American Idol runner up Constantine Maroulis, cameos as a record exec. But Cruise is the only reason to endure this. Outfitted in an Axl Rose bandana, fur jacket, black nail polish and a dragon codpiece, Cruise epitomizes the era's bad boy rock idols. He does his own singing and strutting and sex oozing and despite his larger-than-lifeness is the only believable character in the bunch. His comedic timing is aces - watch as he endures the relentless face sucking of a hanger on as he tries to pitch woo to Constance. He's only let down by director Adam Shankman ("Bedtime Stories"), whose treatment of his first scene with Akerman is too farcical (he has Cruise crooning to her butt) and who lets the camera linger on extended tongues far too long. One can see the bones of Shankman's "Hairspray" in the staging, but this time his direction of actors is schizophrenic - we're never sure whether things are funny/awkward intentionally or not which eventually leads one to conclude that Shankman's just tone deaf. Catherine Zeta-Jones's dance moves are allowed to be so exaggerated she looks like a marionette being jerked about and Bojan Bazelli's ("Burlesque") cinematography is less than flattering. "Rock of Ages" is a mess but it could be "Showgirls" for a new generation.