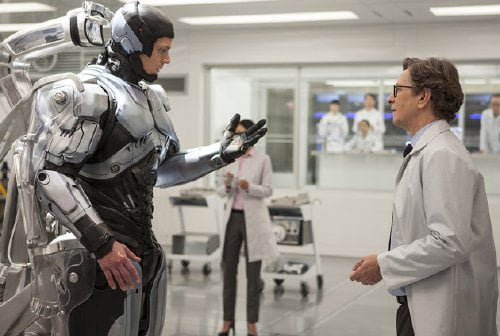 Alex Murphy (Joel Kinnaman, AMC's 'The Killing') is a great family man and also a good cop in 2028 Detroit, even if his Chief (Marianne Jean-Baptiste, "Secrets & Lies") is annoyed he went after gun runner Antoine Vallon (Patrick Garrow) without her pre-approval. But when he's irrevocably injured by a car bomb set by Vallon, Omnicorp seizes the opportunity to to use him to prototype a more indestructible police officer that's also acceptable to a wary populace, a new product they call "Robocop."

Verhoeven's 1987 original, starring Peter Weller, is classic science fiction satire. Working from a script by first timer Joshua Zetumer, director José Padilha's ("Bus 174," "Elite Squad") take is neither man nor metal. 2014's "Robocop," while incorporating concepts that have become reality in the interim (military drones, for example), is an OK entertainment, but it's the last thing a Verhoeven film would ever be - wishy washy. The film starts well enough, updating the disastrous ED-209 conference room demo from the original with a live shoot from Tehran on The Novak Element, a Fox News spoof. After host Pat Novak (Samuel L. Jackson) disparages Senator Drefuss (Zach Grenier, TV's 'The Good Wife') and his bill outlawing armed robotic law enforcement in favor of Omnicorp CEO Raymond Sellars (Michael Keaton) who produces same, we go to a news crew protected by Omnicorp armbands walking amidst humanoid EM-208s and ominous ED-209s. Novak tells his audience the Iranians are happy to have these robots keeping peace, but we see a terrified populace and, of course, after a squad of suicide bombers attack, an ED-209 pinpoints one of their sons, only armed with a knife, as a threat. Back to the studio! When we meet Murphy, he's undercover with partner Jack Lewis (Michael K. Williams, 'Boardwalk Empire'), being sold evidence weaponry by a Vallon associate. But their cover is blown and retaliation is swift. In the first of the movie's many ideas that are presented only to be waffled, Murphy's wife Clara (Abbie Cornish, "Bright Star") is presented with a decision by Omnicorp, including research Dr. Dennett Norton (Gary Oldman), pulled onto the team with a promise that his work will not be used for military purposes. She's shown her husband, lying in a hospital bed with 4th degree burns, a lower leg amputation but no prognosis, and told she can keep him alive if she signs him into their program. She tearfully agrees with few questions. When we see him next, being 'brought to' in a lab, what's left of him is revealed and it's a creepfest - but it makes as much sense as Clara's decision. Norton, who's been introduced as a brilliant, compassionate medical innovator of artificial limbs, carefully guides Murphy into his new reality, but when he and his assistant Jae Kim (Aimee Garcia, Showtime's 'Dexter') load him up with the city's CCTV data and he overloads just before he's to be publicly unveiled by the mayor, Norton does the unthinkable to keep him operable. Robocop's a huge success, but his wife's got questions and he's not proceeding according to plan, investigating his own murder attempt which will, of course, lead right back to where creations against humanity always lead - their ultimate creator. The film's OK by popcorn standards, largely due to supporting players like Oldman, Jackie Earle Haley's belligerent 'trainer,' Mattox and Jackson's bullying know-it-all. Others, like the sublime Jennifer Ehle as Omnicorp's legal counsel, have little to do. Sadly, this is mostly the case for Kinnaman as well. There are also some sharp details, like the digitized, waving American flag which serves as Novak's backdrop or Mattox's insulting musical selection ('If I Only Had a Heart') for an internal Robocop assessment (Mattox being in the total machine camp). But in addition to character motivations which flip flop with plot demands, there are also artistic choices which blunt the film, like the way Robocop's left-handed, black exterior (the color choice gets props from Lewis) becomes white and right-handed at film's end or the dated hydraulic noise his every move makes. A catchphrase from the original is awkwardly inserted. Padilha had a tough act to follow, but while his remake might serve those who've never seen Verhoeven's, they'd be strongly advised to go back to that truly revolutionary film and let this one play out on cable.