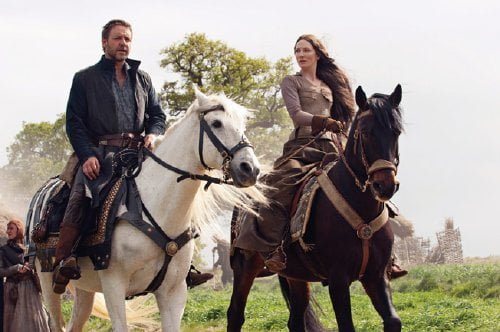 In 13th century France, Robin Longstride (Russell Crowe), an archer with King Richard the Lionheart's army, flees with his men for home after the King's death. Along the way he finds Sir Robert Loxley (Douglas Hodge), who was returning the crown to England, dying after an ambush by the French King Philip's spy Godfrey (Mark Strong, "Sherlock Holmes"). Robin assumes Loxley's identity to return the crown. But in keeping his promise to return Loxley's sword to his father, Sir Walter (Max von Sydow), he is asked to maintain the deceit to guard Robert's widow Marion (Cate Blanchett) and their town of Nottingham. As Loxley, Robin will fight against the tyranny of King John while also defending England from the French who are attacking with the orchestrated aid of the traitorous Godfrey. His heroic exploits will become the foundation of the legendary freedom fighter "Robin Hood."

Director Ridley Scott ("Gladiator," "Body of Lies") continues his exploration of tyranny and religious war mongering with his entirely new take on Robin Hood, one which places the character in historical context to develop the roots of the legend. Screenwriter Brian Helgeland ("L.A. Confidential," "Green Zone") works in perhaps one too many battles and one too many intrigues, but his script employs a pincer movement strategy in giving Robin the internal foe of a tyrannical king who must be politicked in order to defeat the external enemy of France's King Philip (Jonathan Zaccai) and it works nicely. Tired of being mollycoddled by his aide, King Richard (Danny Huston, looking appropriately battle weary) walks through his encampment looking for an honest man and gets belted on the sidelines of a brawl. Longstride admits to having begun the fight (honesty) and his opponent admits to having doubted his mettle (courage), but Robin's honesty in declaring their massacre of Muslims a Godless acts lands him and his men in the stocks, a foreshadowing of just where his future bravery will lead him. Back in London, Eleanor of Aquitaine (Eileen Atkins, "Gosford Park," "Cold Mountain") berates Prince John (Rufus Sewell lookalike Oscar Isaac, "Body of Lies") for sleeping with the French King's niece, Isabella of Angoulême (Léa Seydoux, "Inglourious Basterds"), while his English bride is left outside the door. Once word of Richard's death arrives via the faux Loxley and John is made King, he unwittingly gets into bed with another of Philip's insiders when he dismisses William Marshal (William Hurt) in favor of Godfrey. The King needs cash and considers Richard's Crusades debts of no consequence to him and so sends Godfrey out to burn out his own subjects if they refuse to comply. A rein of terror begins just when England needs to unite. In Nottingham, Robin and his merry men settle and Friar Tuck (Mark Addy, "The Full Monty," "Red Riding") is recruited to defy the Church's order to move its grain seed (the only 'robbing' in this Robin Hood is the hijacking of the seed, which is planted that very night, the crown jewel in Robin's wooing of Marion). In the interim, Robin's advised Marshal of Godfrey's true purpose and Eleanor uses Isabella to convince John of its truth. The new King's eyes are opened just in time for him to rally and face Philip's invasion, his northern barons appeased by the public promise of freedoms made to Robin/Loxley. But John is a dishonorable King. There are far more layers to this epic, from the orphans of Nottingham crusaders who've become masked poachers living in the woods, forerunners of Robin's outlaw lifestyle, to the father and son theme which is paralleled from the Loxleys to Robin's own story, his father a stone mason who crafted the Forest Charter King John implies he will sign. It is telling that here the Sheriff of Nottingham (Matthew Macfadyen, 2005's "Pride & Prejudice") is largely undeveloped, a pawn most concerned with self preservation. It has been said that this "Robin Hood" plays to the politics of the Tea Baggers, but it's broader than that. Scott has expressed anti-tyranny and religious tolerance in films from "Gladiator" to "Kingdom of Heaven." With "Robin Hood" he maybe adds the green movement, although his decision to use England's natural forests, available for want of money, largely negates that. The production is replete with period grime and overcast skies and 'rushes on the floor' great rooms with large loping dogs. Costuming is noteworthy for looking like something credibly produced in its time. CGI effects are generally good, at least until the film's climatic beach battle where approaching vessels recall the ships of "Troy." English land action recalls "Braveheart" while the French landing at the beach could be in "Saving Private Ryan: the 13th Century Edition." The coda, which is where most "Robin Hood" tales begin, just might have you recalling the cavorting Ewoks which wrapped "Return of the Jedi." Still, the film has more merits than debits. Crowe, who shot 200 arrows a day while training for this role, is an understated Robin and Blanchett is a strong Marion. Von Sydow makes for a plucky, blind baron and Hurt and Atkins are terrific as behind the scenes puppeteers. Oscar Isaac pushes both the spoiled and snivelling aspects of his John a bit far and Strong is beyond typecast as a villain at this point. Huston and Zaccai are both strong and flawed kings. For comic relief, Addy, Kevin Durand ("X-Men Origins: Wolverine"), Scott Grimes (TV's "ER") and Alan Doyle fill the bill as Tuck, Little John, Will Scarlet and Allan A'Dayle. This "Robin Hood" has a much larger scope than previous films which mainly stayed within Sherwood Forest. It's a little lacking in humor and a bit in love with battle sequences, but its historical context and fine cast make it a volume worth putting on the bookshelf.